In the key of Lakota: Rapper Frank Waln performs at ArtLab 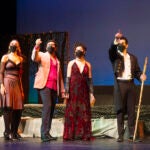 ‘Into the Woods,’ together

The Harvard University Native American Program (HUNAP) hosted the award-winning hip-hop artist and music producer to perform some of his most popular songs, as well as to debut his newest track, “Bad Medicine.” Leverett Saltonstall Professor of History Philip Deloria introduced Waln to the enraptured crowd of about 50 in the contemporary space and later closed out the night with a joint performance of “Custer Died for Your Sins,” a song by Floyd Red Crow Westerman, which is also the name of a book written by Deloria’s father, author Vine Deloria Jr.

“Many of our now-graduated students have been quick to recount how important his words and music were to them on his previous visit,” Deloria said of Waln, who came to Harvard four years ago. “I believe now it’s time for a refresh for our current generation of students and for all the members of our community to have the privilege of being in good musical companionship with a truly talented artist, a person with a good heart, and a lot of smarts.”

Waln introduced himself by sharing his Lakota name, “Walks With the Young Nation” or “Walks With the New Nation,” given to him by elders on the Rosebud Reservation in South Dakota, where he was born and raised.

Waln uses his music as an outlet for healing, but also for education. His songs touch on several issues affecting Indigenous people, from erasure in history books to misrepresentation in media. Waln centered Wednesday’s performance around the fight against settler colonialism, both in the U.S. and abroad.

“Frank does a perfect job at showing all the stuff we grew up hearing as Indigenous people and all the stuff that people around us don’t grow up hearing,” junior James Walkingstick said. The 23-year-old communications intern at HUNAP came to watch Waln because he enjoys listening to the rapper’s new takes on Indigeneity.

One of Waln’s most popular songs, “What Made the Red Man Red,” samples from Disney’s “Peter Pan” and highlights the misrepresentation of Native people in media and history books. “Hollywood portrays us wrong (like savages)/History books say we’re gone (like savages)/Your god and church say we’re wrong (savages)/We’re from the Earth, it made us strong,” he rapped.

Waln shared powerful storytelling and instrumentals in his performance. He suffered a stress-induced seizure in February 2020 that was compounded by medical trauma he experienced in the hospital, he told the audience. Following his hospital stay, Waln used his Native flute to practice and retrain his breathing, he said.

Waln’s innate ability to tell stories captured the praise of many students who attended the event. Natives at Harvard College secretary Kira Fagerstrom ’24, who is Iñupiaq, said she loved that “he incorporated a lot of wisdom” in his music, adding that his storytelling before performing each of his songs made his act better.

Fellow NAHC member Lindsey Hightower ’23, who is Ohkay Owingeh Pueblo, agreed. “He was such a great storyteller,” the human developmental and regenerative biology concentrator said. “It gives people a fresh perspective, especially one that’s not their own, when he’s talking about how he’s raised in a matriarchal society. Most people cannot relate to that statement.”

Students said they were excited to attend an event that featured Indigenous representation, and that they hoped there would be more education about Indigenous issues on campus and greater involvement from the Harvard community during these events.

“More conversations about Indigeneity need to happen at Harvard’s campus, especially with Harvard’s history,” Walkingstick said. “Seeing this turnout really encourages me. I love seeing this many people in one room — despite COVID — coming together to listen to somebody and listen to their narrative and their authentic voice.”