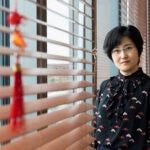 Don’t be fooled by the name. While 3D printers do print tangible objects (and quite well), how they do the job doesn’t actually happen in 3D, but rather in regular old 2D.

Working to change that is a group of former and current researchers from the Rowland Institute at Harvard.

First, here’s how 3D printing works: The printers lay down flat layers of resin, which will harden into plastic after being exposed to laser light, on top of each other, again and again from the bottom to the top. Eventually, the object, such as a skull, takes shape. But if a piece of the print overhangs, like a bridge or a wing of a plane, it requires some type of flat support structure to actually print, or the resin will fall apart.

The researchers present a method to help the printers live up to their names and deliver a “true” 3D form of printing. In a new paper in Nature, they describe a technique of volumetric 3D printing that goes beyond the bottom-up, layered approach. The process eliminates the need for support structures because the resin it creates is self-supporting.

“What we were wondering is, could we actually print entire volumes without needing to do all these complicated steps?” said Daniel N. Congreve, an assistant professor at Stanford and former fellow at the Rowland Institute, where the bulk of the research took place. “Our goal was to use simply a laser moving around to truly pattern in three dimensions and not be limited by this sort of layer-by-layer nature of things.”

The key component in their novel design is turning red light into blue light by adding what’s known as an upconversion process to the resin, the light reactive liquid used in 3D printers that hardens into plastic.

In 3D printing, resin hardens in a flat and straight line along the path of the light. Here, the researchers use nano capsules to add chemicals so that it only reacts to a certain kind of light — a blue light at the focal point of the laser that’s created by the upconversion process. This beam is scanned in three dimensions, so it prints that way without needing to be layered onto something. The resulting resin has a greater viscosity than in the traditional method, so it can stand support-free once it’s printed.

“We designed the resin, we designed the system so that the red light does nothing,” Congreve said. “But that little dot of blue light triggers a chemical reaction that makes the resin harden and turn into plastic. Basically, what that means is you have this laser passing all the way through the system and only at that little blue do you get the polymerization, [only there] do you get the printing happening. We just scan that blue dot around in three dimensions and anywhere that blue dot hits it polymerizes and you get your 3D printing.”

The researchers used their printer to produce a 3D Harvard logo, Stanford logo, and a small boat, a standard yet difficult test for 3D printers because of the boat’s small size and fine details like overhanging portholes and open cabin spaces.

The researchers, who included Christopher Stokes from the Rowland Institute, plan to continue developing the system for speed and to refine it to print even finer details. The potential of volumetric 3D printing is seen as a game changer, because it will eliminate the need for complex support structures and dramatically speed up the process when it reaches its full potential. Think of the “replicator” from “Star Trek” that materializes objects all at once.

But right now, the researchers know they have quite a ways to go.

“We’re really just starting to scratch the surface of what this new technique could do,” Congreve said.