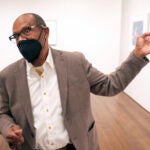 Art with a conscience

Class closely examines who is cast for what role, how cultural identity is portrayed

It was in some ways revolutionary: a Broadway musical that would touch on themes of immigration, income inequality, racism, sexism, gang violence. But when “West Side Story” opened on Broadway in 1957, the Romeo and Juliet story of warring white and Puerto Rican street gangs would feature only two Puerto Rican actors in the main cast, with the remaining Latinx characters portrayed by white actors affecting broad, nearly comic Spanish accents.

That issue sits at the center of Miller’s class “Broadway Bodies, or Representation on the Great White Way.” The focus of the course is to push students to think critically about the race and gender of who gets cast for which role on Broadway and how Broadway stages cultural identity.

Miller’s class numbers close to 30, and varied perspectives from students, mostly undergrads and a few from GSAS, reaffirm the importance of balancing “critical instincts with pleasure, enthusiasm, and affection,” he said. Some described themselves as “theater kids,” while others hoped to learn more about the theater world, who performs and who is in the seats watching.

Junior Sarida Morejon did not know much about Broadway before signing up but chose “Broadway Bodies” as part of a wider effort to take classes focused on representation this semester. “I’m pretty far removed from the theater world. I didn’t realize how white the productions are, and also how white the audiences are,” said the 20-year-old history concentrator. “The audience part really threw me for a loop. I think it’s something that when you start thinking about it makes more sense.”

Broadway has a long history of racial imbalance on and off stage. Last year, a report by the Asian American Performers Action Coalition revealed that white actors played nearly 59 percent of roles during the 2018-2019 season, and off-stage, 81 percent of writers and directors were white.

Students in the class read and dissect more than a dozen shows, including Steven Sondheim’s “Gypsy,” Lin Manuel Miranda’s two big hits, “In the Heights” and “Hamilton,” as well as Arthur Laurents’ “West Side Story.” Students read the shows’ original texts and reviews and listen to the scores.

Examples of white actors playing characters of color abound, but the course takes a broader and deeper look at representation. Morejon said that studying Miranda’s “In the Heights” allowed her to look at a musical she loves in a new light. As an Afro-Latina, Morejon saw herself in the musical but acknowledged she found it “severely lacking” when it comes to true representation of the Latinx community.

“We talked a lot about colorism in both the movie and the show, but I think the movie coming out raised those issues more,” she said. “We had this really interesting discussion on how everyone in the show is given a specific ethnicity — you’re Dominican, or you’re Cuban, or you’re Puerto Rican. But in the end, it collapses a lot of those identities into a single Pan-Caribbean, Latinx identity” with the absence of dark-skinned Afro-Latinos in lead roles.

Avid musical theater lover Lauren Perl ’25 said taking Miller’s course, in which students study in depth librettos from shows such as “Dreamgirls” and “On the Town,” was an easy decision. The 19-year-old who lives in Wigglesworth Hall said she was most excited about critically analyzing the texts of shows she watched and listened to as a child. Perl, who is white but grew up in a largely Hispanic neighborhood in Rockville, Maryland, also took note of Miranda’s portrayal of Latinx communities in “Heights” and how language can both unify and divide.

“Spanish-speaking culture truly unites all these people, even though in the show they’re from Cuba, the Dominican Republic, Puerto Rico, etc. It’s really important that it shows those cultures, and it’s really important that it shows racism within a specific marginalized community,” she said. Miranda, who was criticized for colorism in the film adaptation of the show, tackled the issue of anti-Blackness that is prevalent in the Latinx community of the musical. It happens most directly in the relationship between Nina Rosario, a Puerto Rican college student, and Benny, a Black taxi dispatcher working for Nina’s father, who must struggle with the older man’s racism.

It was those conversations on identity both on stage and off that have fascinated “theater kid” Mara Sims. The 19-year-old first-year said she views identities as an inherent and automatic part of the individual. But Miller’s view that identities are a performance led Sims to think about the concept in a new way, she said.

“When I say we’re always performing our identities, I draw attention to the fact that who we are is a product of what we do,” Miller explained. “Our individual performances are also always framed by expectations about us, which include expectations based on race, gender, sexuality, disability, age, etc.”

While leading students to think critically about representation on Broadway, Miller is up front about his personal experiences as a white man, students said. Morejon also noted his willingness to learn as much from students as he’s hoping to teach them. “I think it’s really valuable to have somebody like that as the professor for a course like this,” she said.

For his part, Miller has been impressed with how his students approach the complex discussions on identity and representation. “They all arrive with a set of instincts about what authentic and ethical representation looks like, and those instincts vary wildly,” he said. “I learn a lot simply from hearing everyone think through the implications of the works we discuss, being reminded of how what seems obvious to me is, in fact, far from obvious to another student.”