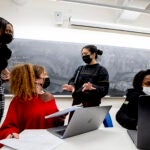 Let us not suffer Psets alone

With the U.S. Supreme Court poised to hear the ongoing legal challenge to Harvard’s race-conscious admissions policies this fall, lead trial counsel William F. Lee ’72 sat down with Chief Diversity and Inclusion Officer Sherri Ann Charleston Wednesday to discuss what’s at stake in the case and to demystify the admissions process as part of a forum hosted by the Office of Equity, Diversity, Inclusion and Belonging (EDIB).

Activist Edward Blum and his organization, Students for Fair Admissions (SFFA), filed a lawsuit in 2014 challenging Harvard College’s consideration of race in admissions and alleging that the College’s admissions policies discriminated against Asian American applicants.

In 2019, following a three-week trial, U.S. District Court Judge Allison D. Burroughs found for Harvard. In a 130-page ruling, the judge held that Harvard did not discriminate, did not engage in racial balancing or the use of quotas, and did not over-weight race when considering applicants for admission. Burroughs also concluded the College had demonstrated that “no workable and available race-neutral alternatives” would allow for the creation of a diverse student body that retained the College’s high academic standards. The U.S. Court of Appeals for the First Circuit affirmed her ruling in November 2020.

“If I thought there was affirmative discrimination against Asian Americans, I would not have been the lead trial lawyer,” said Lee, the Harvard Corporation’s senior fellow and a lecturer at Harvard Law School.

The Supreme Court announced in January that it would take up SFFA’s petition for review in the 2022-2023 term, along with a related case involving the University of North Carolina also brought by Blum and SFFA. As recently as 2016, the court has said that race can be one of the factors that colleges and universities consider when deciding whom to admit.

What’s at stake in the case goes well beyond Harvard’s campus. As the world grows more diverse, “How we address diversity, inclusion, and inequality are critical to our society. They’re critical to the globe,” said Lee. And educational institutions play an important part in this process.

Noting how the demographics of the student body have changed dramatically since he was a Harvard College student in the late 1960s, Lee, the son of Chinese immigrants, recalled how few women and students of color, including other Asian Americans, were in his class. “I’m pretty sure I knew all 10 or 12 of us,” Lee joked during the virtual session attended by Harvard community members.

Today, Harvard College is diverse not only in terms of race, ethnicity, and gender, but in many other dimensions, including socioeconomic, educational, and geographic background. Students admitted to the Class of 2026 come from 98 countries and all 50 U.S. states; 15.5 percent of students self-identify as Black/African American, 27.8 percent as Asian American, 12.6 percent as Latinx, 2.9 percent as Native American, 0.8 percent as Native Hawaiian. Women comprise 54 percent of the admitted class.

SFFA’s core allegation, that Harvard discriminates against qualified Asian Americans in order to pursue other racial diversity goals, is premised in part on a widely held misunderstanding of the College’s admissions process, said Lee.

Final decisions are made by a 40-member panel of admissions officers who come from a diverse array of professional and demographic backgrounds. Voting takes place in an open meeting, he explained.

What some outside the admissions process may not fully appreciate is how competitive the applicant pool has become. Lee said that the testimony during the trial was that approximately 15,000 applicants each year were fully qualified and would do well at Harvard, if admitted. But with only around 1,600 open spots in each class to fill from a pool of what is now 61,000 applicants and a mandate to assemble a “robust, dynamic” community where students learn from each other, the criteria that admissions officers rely on must be nuanced.

The perception that race-conscious admissions means that less- or unqualified candidates are given preferential treatment over the more qualified is “just not true,” said Lee. “No one’s getting admitted who isn’t in that group of 15,000 fully qualified people … and I think it’s unfair to assume that people of a specific demographic are somehow unqualified — because they are all qualified.”

Asked whether Harvard had looked at other “race-neutral” factors instead of race, Lee said it had. A committee chaired by former Edgerley Family Dean of the Faculty of Arts and Sciences Michael Smith, which also included Rakesh Khurana, Danoff Dean of Harvard College, and William R. Fitzsimmons, Dean of Admissions, reviewed every race-conscious policy SFFA proposed, plus others, to determine whether the policies would still permit Harvard to achieve its educational goals as well as build the diverse learning community central to its educational mission if race were not taken into consideration.

“And the answer is, it would not,” said Lee.

Although an expert for SFFA suggested at trial that socioeconomic status might be a comparable substitute for race, Lee said an analysis done for the College by University of California, Berkeley, economist David Card, winner of the 2021 Nobel Prize, found that such an approach would result in a class that was less academically qualified and would have 40 percent fewer African American students. His analysis also showed that many factors unrelated to race can tip the scales in a student’s favor.

“There is no single consideration that automatically puts someone in the class. It’s a whole collection of considerations,” Lee said of Card’s findings.

To those who believe race-conscious admissions policies also disproportionately harm white applicants, Lee said when competing with 60,000 other applicants, there’s no question that getting into Harvard is harder now than it was when he attended 50 years ago.