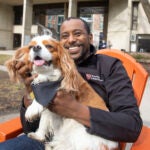 Feeling at home at Mather House

Robin Batteau wondered if he was up to the challenge, 50 years after family financial trouble disrupted his education

When the violinist and budding singer-songwriter Robin Batteau left Harvard in 1968, he was two semesters short of a degree.

“My father died in debt and the family was in trouble financially,” he said. “I left to get a big record deal and help out.”

The plan stalled, and Batteau returned to campus in 1970 to complete his studies. He was at the finish line, having fulfilled the requirements for his biology concentration, when family financial problems surfaced again, forcing another leave before he had the credits to graduate. He turned his back on School and for a long time didn’t look back.

Batteau spent five decades performing, recording, and writing music, including successful jingles like Chevrolet’s “Heartbeat of America.” Harvard hardly crossed his mind. Then the pandemic hit, and he had “all the time in the world” to reflect. “Unfinished business rises to the top,” he said. “I thought, ‘Why don’t I come back?’”

“I took ancient Greek language — that’s the course that kicked my brain. … It was tough, but wonderful.”

With approval from his resident dean — Batteau was part of Dudley House, now Dudley Community — he signed up for the virtual summer school class “Introduction to the Ancient Greek World” last year.

“By itself his age was not a great surprise,” said Classics lecturer Natasha Bershadsky. “But what was a delightful surprise was his attitude — I think he was happy to be in the class and he was certain that he wanted to be there. I think there were strands in the ancient Greek world that felt very close to Robin’s heart — the pervasive music-making, the emotionality, the virtuoso modulations between joy and sadness. I also felt that for Robin there was no boundary between the research and the creative possibilities, which is something I feel affinity to. He was just enjoying it all — the learning, the discussions. His assignments were always written with verve and wit. My reaction to the idea of finishing the unfinished business at 74 was a feeling that that was very life-affirming; I admire it and wish I would be able to do something similar for myself in my 70s.”

Said Batteau: “I wanted to find out if I had what it took to still be a student. I was delighted to discover I could do it, and I reupped for the whole deal. At first, I thought I could take two courses — I’m old and slow — but I ended up taking a full load.”

In the fall, he moved into an apartment near campus and signed up for four courses, including “The Ancient Greek Hero” and the seminar “Songmaking and the Idea of Lyric,” in which he studied the poetic works of Sappho and the sophist Gorgias. “Sappho was the Joni Mitchell or Carole King of her time, a goddess of song,” Batteau said. “I said, ‘Let’s see if I can make a song out of the fragments.’ I also wrote a song based on Gorgias’ ‘Encomium of Helen.’ I thought, ‘I should do more, this fills me up.’”

Batteau delighted in the challenges of being back in College after a 50-year gap, grateful for the opportunity to learn, even among classmates who could have been his great-grandchildren and with powers of retention that sometimes faltered.

“The technology helped a lot,” he said. “I didn’t grow up with a laptop in my crib. I took ancient Greek language — that’s the course that kicked my brain. Oldsters have a harder time, and I had to relearn all the words and grammar each week. It was tough, but wonderful. I wasn’t just dabbling; it was an immersion and I was in over my head. My goal was to just pass.”

He easily met his objectives, earning the credits to graduate with a degree in integrative biology. In February, he returned to Harvard Square to perform with longtime musical partner David Buskin for a packed house at Passim (“another cradle of civilization,” he says), and he’ll be back again in May to celebrate Commencement as a member of the Class of 2022.

“We’ll see where it goes from here,” Batteau said. “I have my sail up and I’m waiting for wind to take me somewhere cool.”