A glimpse into the universe’s first light 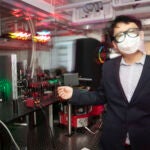 It looks like fireflies flickering in the darkness. Slowly, more and more amass, lighting up the screen in large chunks and clusters.

But this is not a video about insects. It’s a simulation of the early universe, a time after the Big Bang when the cosmos transformed from a place of utter darkness to a radiant, light-filled environment.

The stunning video is part of a large suite of simulations described in a series of three papers accepted to the Monthly Notices of the Royal Astronomical Society. Created by researchers at the Center for Astrophysics | Harvard & Smithsonian, Massachusetts Institute of Technology, and the Max Planck Institute for Astrophysics, the simulations represent a monumental advancement in simulating the formation of the first galaxies and reionization — the process by which neutral hydrogen atoms in space were transformed into positively charged, or ionized, hydrogen, allowing light to spread throughout the universe.

The simulated period, known as the epoch of reionization, took place some 13 billion years ago and was challenging to reconstruct, as it involves immensely complicated, chaotic interactions, including those between gravity, gas and radiation, or light.

“Most astronomers don’t have labs to conduct experiments in. The scales of space and time are too large, so the only way we can do experiments is on computers,” explains Rahul Kannan, an astrophysicist at the Center for Astrophysics and the lead author of the first paper in the series. “We are able to take basic physics equations and governing theoretical models to simulate what happened in the early universe.”

The team’s simulations — named Thesan after the Etruscan goddess of dawn — resolve interactions in the early universe with the highest detail and over the largest volume of any previous simulation. Physics in the early universe are captured down to scales that are a million times smaller than the simulated regions, providing unprecedented detail on properties of early galaxies and how light from these galaxies impacted gas.

The team accomplishes this by combining a realistic model of galaxy formation with a new algorithm that tracks how light interacts with gas, along with a model for cosmic dust.

With Thesan, researchers can simulate a piece of our universe spanning over 300 million light-years across. The team can run the simulation forward in time to track and visualize the first appearance and evolution of hundreds of thousands of galaxies within this space, beginning around 400,000 years after the Big Bang, and through the first billion years.

The simulations reveal a gradual change in the universe from complete darkness to light.

“It’s a bit like water in ice cube trays; when you put it in the freezer, it does take time, but after a while it starts to freeze on the edges and then slowly creeps in,” says study co-author Aaron Smith, a NASA Einstein Fellow in MIT’s Kavli Institute for Astrophysics and Space Research. “This was the same situation in the early universe — it was a neutral, dark cosmos that became bright and ionized as light began to emerge from the first galaxies.”

The simulations were created to prepare for observations from the James Webb Space Telescope (JWST), which will be able to peer further back in time —approximately 13.5 billion years — than predecessors like the Hubble Space Telescope.

“A lot of telescopes coming online, like the JWST, are specifically designed to study this epoch,” Kannan says. “That’s where our simulations come in; they are going to help us interpret real observations of this period and understand what we’re seeing.”

Real telescope observations and data will soon be compared to Thesan simulations, the team explains.

“And that’s the interesting part,” says study co-author Mark Vogelsberger, an associate professor of physics at MIT. “Either our Thesan simulations and model will agree with what JWST finds, which would confirm our picture of the universe, or there will be a significant disagreement showing that our understanding of the early universe is wrong.”

The team, however, won’t know how various aspects of their model fares until the first observations roll in, which will cover a wide range of topics, including galaxy properties and the absorption and escape of light in the early universe.

“We have developed simulations based on what we know,” Kannan says. “But while the scientific community has learned a lot in recent years, there is still quite a bit of uncertainty, especially in these early times when the universe was very young.”

The simulations were created using one of the world’s largest supercomputers, the SuperMUC-NG, over the course of 30 million CPU-hours. The same simulations would have required more than 3,500 years to complete on a normal computer.

Additional scientists who make up the Thesan team are Lars Hernquist of the CfA; and Enrico Garaldi, Ruediger Pakmor and Volker Springel of the Max Planck Institute for Astrophysics.