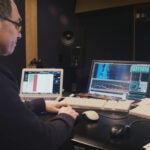 Preserving voice of president — and thousands of others

It is 40 years in the future. In the senate chamber of a global governing body, “Mr. Majority” introduces a bill to shrink the Earth’s quickly rising oceans down to seven smaller, more manageable inland seas. The Ocean herself arrives to take a stand.

“Ocean Filibuster,” a new musical theater production at the American Repertory Theater, examines the intimate relationship between nature and humanity.

“One of the reasons why we as the human race are able to continue our lifestyle is because the ocean takes so much from us by absorbing carbon and trash,” said director Katie Pearl. “What if the Ocean got so fed up with taking it until they started talking and wouldn’t shut up until someone listens to them?”

The play was commissioned and developed through a collaboration with the Harvard University Center for the Environment (HUCE). In 2017, Ryan McKittrick, A.R.T.’s director of artistic programs, and Diane Borger, former A.R.T. executive director, invited Pearl to the theater to discuss commission opportunities. Pearl was then also part of the Theater, Dance, & Media faculty as a visiting lecturer.

“Ocean Filibuster” was slated to open in 2020, but the COVID-19 pandemic halted the plan.

“It’s been a long process, in part because the pandemic delayed our opening, but it’s allowed us to deepen the work,” said playwright Lisa D’Amour. “The uprisings of 2020 brought to the surface not only racial equity, but also climate justice. This show is arriving at the right moment, even if we had to wait a year and a half.”

During the delay, D’Amour and Pearl worked over Zoom with their team and worked on multimedia components that accentuate the play’s message.

“One of the things that is so exciting about this production is that it’s highly theatrical, and it’s taking advantage of what theater can do,” said McKittrick.

“All of those things combine in a total theater experience to engage audiences in a new way with some new questions about the climate crisis,” McKittrick said.

The collaboration with HUCE gave Pearl and D’Amour access to scientists, researchers, and other faculty across the University to learn more about the physical, scientific aspects of the ocean.

“The show goes into a lot of the tiny things that live in the ocean. We wanted to speak to scientists who had the expertise we were looking for,” said D’Amour. “The ocean is just an endless topic.”

Dan Schrag, director of HUCE, said he’s had “a blast” working with the production.

“There were lots of conversations about how we observe the ocean, how much we know about it, how much we don’t know about it,” he said. “I think all of it affected these artists, but at the same time, what came out of their minds came purely from them.”

The relationship between the A.R.T and HUCE facilitates these conversations between academics and artists — and it’s not limited to scientists. Faculty from across the University are invited to conversations with playwrights during the production process to offer insight and inspiration.

“This vision for a mode of interaction between playwrights and academics to me is the perfect example of why we have the A.R.T. at Harvard,” Schrag said. “The work that they do is engaged with the work we do.”

Schrag added that art and academia take different approaches to finding what “truth” means, with each contributing to the other.

“Science uses a much narrower palette. We have rules, observations, data. We reproduce results. We can use statistics, and we’re trained to remove our emotions and biases, because whatever we find should be independent of those things. Truth in science is a funny concept because science never really finds truth, but maybe it’s trying to get there” he said. “Art gets to use a much wider palette. Emotions are in bounds; biases are absolutely center. Truth in art is something deep within. It may be more subjective, but it’s every bit as powerful.

“It’s important to let the artists make art,” he said. “We can teach them and educate them, but our job isn’t to constrain them because we follow rules that don’t apply to them.”

After its debut at the A.R.T., “Ocean Filibuster” is going on the road to locations including New Orleans, Houston, Texas, and Middletown, Connecticut. The tour was funded by a Kickstarter campaign. It will feature an interactive intermission with installations in the lobby to involve audience members deeper into various topics and experience different themes from the show. For Massachusetts, Pearl and D’Amour worked with the Conservation Law Foundation for New England to create the intermission installations about the overfishing of cod in the state.

Pearl and D’Amour hope that “Ocean Filibuster” will bring the relationship between the environmental and humanity into focus.

“The simplest thesis is: ‘We are ocean.’ We are part of a system that involves ocean, air, land,” said D’Amour. “Sometimes, many times, the smaller systems that we’re involved in — like human consumption­ — make it impossible to see the larger system.”

“We are habituated to thinking that we’re human, and this is the ocean,” added Pearl. “The piece is also saying that’s not actually an accurate way to look at the world, and it’s keeping us from moving forward.”

Tickets are available through the A.R.T. An on-demand version can also be purchased here.