‘We need to rethink how we are studying cancer metabolism’ 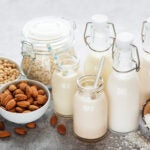 Milk used to be simple

Insights into how cancer cells adapt and rewire their metabolism to achieve growth and survive were accompanied by a call for tools to study this on a nearly single-cell level, according to a new paper in Nature Communications.

In the 1920s, Otto Warburg observed that cancer cells metabolically adapt their glucose pathway in unusual ways. Normally, glucose — the main nutrient needed for cells to function — is sent to the cell’s mitochondria to be broken down for energy, a process that requires oxygen. However, cancer cells appear to rapidly increase their glucose uptake and directly ferment it into lactate, even in the presence of oxygen and functional mitochondria.

“He called it aerobic glycolysis, but we know it as the Warburg effect,” says author Raul Mostoslavsky, scientific co-director of the Mass General Cancer Center and the Laurel Schwartz Professor of Oncology (Medicine) at Harvard Medical School. For nearly 15 years researchers have been trying to explain why cancer cells do this.

In this paper, Mostoslavsky’s team studied colon cancer tumors to learn more. They developed a fluorescent reporter that stained only a marker of glycolysis in cells of the tumor. Using this reporter and a mass spectrometry imaging approach developed by collaborator Nathalie Agar of Brigham and Women’s Hospital, the researchers found that not all cells within the colon cancer cell relied on Warburg glycolysis.

“We found that this metabolic adaptation does not happen in the whole tumor, only in a heterogeneous group that were not dividing,” says Mostoslavsky. His team had published this heterogeneous feature in squamous cell carcinoma but this is the first time it has been shown in colon cancer, and in non-dividing cells.

“What really surprised us is that when we stained the tumor cells with a marker of cell proliferation, they were mutually exclusive,” adds Mostoslavsky. Within fully transformed colon cancers, the cells that were doing Warburg glycosis were not dividing.

“This completely challenges the dogma of the Warburg effect,” he adds.  For the past 10 to 15 years, most researchers working in cancer metabolism have held that cancer cells do Warburg glycolysis to send glucose for biomass production, or rapid proliferation. “Instead, we found that the main reason they were doing it was to reduce reactive oxygen species, or ROS.” Reactive oxygen species damage cells during glucose breakdown and energy production: “The cells do Warburg metabolism to protect against accumulation of ROS.”

This research showed that indeed Warburg glycolysis is real and functional in cancer cells as a needed adaptation. “But it’s not for the reason we used to think,” says Mostoslavsky. “This means we need to rethink how we are studying cancer metabolism.” Much of the advancements made in the past 10 years studying cancer metabolism come from mass spectrometry analysis of metabolomics, which require many cells. The problem is a lack of means for analyzing cellular heterogeneity.

“If metabolic adaptation happens in some cancer cells or not in others, you will not be able to determine that with the current technologies that exist,” he says. “We now know Warburg glycolysis is a heterogeneous feature happening in tumors so we need to develop tools that will allow us to investigate tumors in a single-cell fashion.”

In this paper, the team relied on a novel mass spectrometry imaging tool developed to achieve data almost at a single cell resolution. Says Mostoslavsky: “It is clear that cancer metabolism is highly heterogeneous so we will need new tools like this to study and define these metabolic features in tumors.”

This was adapted from a Massachusetts General Hospital press release.