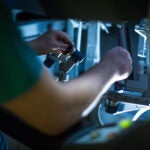 Robots may have upper hand in prostate surgery

President Biden’s recently announced cancer “moonshot” has been described as merely a reboot of the original, unveiled by President Obama in 2016 to much fanfare. But specialists say the effort is not just more of the same, but a reassessment, with new goals and a welcome focus on prevention.

Harvard experts expressed relief that Biden didn’t follow in the footsteps of some campaigns and pledge to eliminate cancer entirely. At a time when scientific truth and accuracy are being questioned, they said, unrealistic goals only further erode the public’s trust in science.

They agreed, however, that one of the project’s chief objectives — halving the cancer death rate — is possible. Optimism stems from dramatic advances over the past two decades in understanding cancer biology, which has translated into more effective treatments. These breakthroughs include precision therapies, which target specific differences between tumor and normal cells in individual patients, and immunotherapy, which activates the body’s defense mechanisms against the disease.

“These new classes of treatments are the two big lessons of the last 20 years, and those are pretty remarkable,” said George Demetri, a professor of medicine at Harvard Medical School and the Dana-Farber Cancer Institute and co-director of the Ludwig Center at Harvard. “And I can guarantee you that there’ll be at least two more big ones in the next 20 years.”

Demetri gives the original moonshot a mixed grade. The resources it provided have boosted research, resulting in new technologies such as a needlelike device that can be inserted into a tumor to test several drugs at once for effectiveness. But some things he thought essential and whose progress would be helped by federal support — like standardizing patient electronic records and increasing their portability between systems — have seen little improvement.

“Our ability to extract useful information from medical records is still woefully inadequate,” Demetri said. “The electronic medical records systems are better than chicken scratch on a piece of paper, but they still keep data in a very siloed way that is inefficient, unhelpful to research, and impossible to aggregate into a large-scale learning system.”

“Maybe we need to stop thinking, in some cases, about a cure for cancer. … Maybe they don’t need to be curable for us to have long, healthy lives.”
— Timothy Rebbeck

Cancer death rates have fallen steadily since peaking in 1990, dropping about a third from 216 cancer deaths per 100,000 to 145 per 100,000 in 2020. While possible, halving the age-adjusted death rate is by no means guaranteed, Demetri said. Cancer is a hugely complex and mysterious disease. Precision treatments, for example, can be amazingly effective, targeting patient-specific alterations in certain tumor subtypes with custom-designed drugs. But those same drugs may be ineffective on other tumors, even with the same type of cancer.

Demetri also isn’t a fan of the “moonshot” comparison. Though obviously a massive undertaking, the physics to land a human on the moon were known. The challenge for scientists was putting existing knowledge to work through engineering and scaling the results.

“With cancer research, there are still so many unknowns that you never really know where the next breakthrough is going to come from,” Demetri said. “What worries me about this moonshot messaging is that it sets up a public expectation: ‘Put this money here and in five years you’ll be invited to Cape Canaveral to see a big rocket go up,’ and everybody will be happy. Research doesn’t necessarily work that way in biomedical science discovery.”

While the analogy may be faulty from a scientific standpoint, the idea that progress against cancer will take moonshot-scale financial resources is not, according to Timothy Rebbeck, the Vincent L. Gregory Jr. Professor of Cancer Prevention at the Harvard T.H. Chan School of Public Health and director of the School’s Zhu Family Center for Global Cancer Prevention.

“We don’t know what that money is going to look like and we don’t know how it’s going to be administered,” he said. “If you supplement and facilitate all the great work that’s going on now and the progress we’ve had in the right way, we absolutely could meet this 50 percent goal, there’s no question. But the devil is in the details in politics. We’ll see.”

“We could actually prevent about half of the cancers in the country if we just did what we know right now.”
— Karen Emmons

Better treatment isn’t the only way to improve the cancer landscape, however. Rebbeck said rethinking the health risks posed by different cancers, like prostate and thyroid, may mean more people will be able to live with cancer as a chronic disease. Cancer’s reputation as a death sentence is not only outdated, it can cause a panic and rush to treat that may be harmful, such as when medicines against a slow-growing cancer come with debilitating side effects.

“Maybe we need to stop thinking, in some cases, about a cure for cancer,” Rebbeck said. “Some cancers are curable and that’s good, but others won’t be curable. Maybe they don’t need to be curable for us to have long, healthy lives, and to live well. It’s hard for a patient to hear, ‘You have prostate cancer and we’re not going to do anything,’ but that might be the right answer.”

Rebbeck and Karen Emmons, professor of social and behavioral science at the Chan School, welcomed the emphasis on prevention in the Biden plan. Prevention has the potential to make a significant impact on mortality because, unlike treatment, there is already a lot of knowledge about how to prevent cancer. The problem — one that plagues many public health campaigns — is how to educate and motivate people to take action.

Tackling lifestyle-related causes can make a big difference in the numbers of Americans who die from cancer, Emmons noted. Ideas include more effective anti-smoking campaigns and a stronger commitment to reducing obesity, which is linked to 13 cancers, according to the Centers for Disease Control. Though there has been progress on smoking for decades — it has fallen from 42 percent to 14 percent among U.S. adults since 1962 — 34 million Americans still light up daily and the CDC says that 1,600 youths try their first cigarette each day.

One straightforward way to cut smoking would be to spread successful anti-smoking strategies as broadly as possible. In 2006, for example, 40 percent of Massachusetts Medicaid patients smoked, twice the rate of the general population. In response, Massachusetts’ Medicaid program, MassHealth, started covering treatments to help people quit smoking.

“The smoking rate dropped like a stone,” Emmons said “It went from 40 percent to 28 percent in two years, which is blown-out-of-the-water amazing. And it had a huge impact on savings, more than $2 for every dollar spent.”

“What worries me about this moonshot messaging is that it sets up a public expectation: ‘Put this money here and in five years you’ll be invited to Cape Canaveral to see a big rocket go up,’ and everybody will be happy.”
— George Demetri

Other prevention strategies include stepped-up screening, which can catch colorectal, skin, and breast cancers when they’re relatively simple to treat, and vaccines, which can stop cervical, vaginal, and other cancers caused by viruses. Though the human papilloma virus vaccine can prevent 90 percent of HPV-associated cancers, a 2019 CDC report showed that just 51 percent of all teens had received the recommended doses.

“We know a lot about cancer prevention,” Emmons said. “We could actually prevent about half of the cancers in the country if we just did what we know right now. So how do we do it?”

To boost prevention measures, the original moonshot created Implementation Science Centers around the country. Emmons heads one such program, the Chan School’s Implementation Science Center for Cancer Control Equity, where her projects include a collaborative effort to increase health care providers’ ability to refer patients for lung cancer screening and smoking cessation services.

“We’re really trying to make what we know, what we do, for everybody,” she said. “In the end, moonshot will succeed to the extent that everybody gets evidence-based preventive care.”