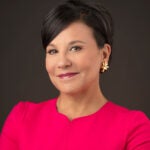 Penny Pritzker ’81 elected next senior fellow of the Harvard Corporation

Scholar, civil rights attorney will be honored for her work advancing equality and access to education

“Sherrilyn embodies Radcliffe’s highest ideals,” said Tomiko Brown-Nagin, dean of the Radcliffe Institute for Advanced Study, Daniel P.S. Paul Professor of Constitutional Law at Harvard Law School, and professor of history in the Faculty of Arts and Sciences. “She is an influential scholar and educator, and she is deeply engaged in the hard work of change-making. As a nation, we owe a great deal to her pathbreaking leadership.”

Ifill serves as the seventh president and director-counsel of the NAACP Legal Defense and Educational Fund (LDF). For nearly a decade she guided the storied organization founded in 1940 by Thurgood Marshall, taking it through a period of tremendous growth and transformation. Her career at the LDF began in 1988, when she joined the organization’s New York office as an assistant counsel. She has litigated voting rights cases, including the landmark Supreme Court case Houston Lawyers’ Association v. Attorney General of Texas, which extended Voting Rights Act protections to elections of state trial court judges.

Ifill also spent two decades at the University of Maryland, where she taught and mentored the next generation of civil rights lawyers as a professor of law, while continuing to litigate and consult on a broad range of civil rights cases. At UMD, Ifill launched one of the first legal clinics in the nation focused on removing legal barriers to formerly incarcerated persons seeking to re-enter society responsibly.

Ifill’s scholarly writing has focused on the importance of a range of civil rights issues. Her influential book “On the Courthouse Lawn: Confronting the Legacy of Lynching in the Twenty-First Century” (Beacon Press, 2007) is an unflinching analysis of race, racism, and American public life. Bryan Stevenson, J.D. ’85, M.P.P. ’85, the founder and executive director of the Equal Justice Initiative, in his forward to the second edition of “On the Courthouse Lawn,” calls Ifill “one of the most important leaders in America … at the forefront of the some of the most urgent issues facing the United States and our nation’s long struggle for racial equality.” In 2021, Ifill was recognized by Time magazine as one of the 100 most influential people in the world.

“We are in a profound crisis of democracy born of this country’s refusal, failure, and inability to grapple with racism and white supremacy,” Ifill has said. And yet she remains optimistic about the potential for change through collective action: “Multiracial protest is a demonstration of the vitality of and desire for public life and public engagement,” she says. “Even when the courts failed, the people have asserted their unrelenting determination to be full citizens.”

On the critical importance of education, Ifill quotes Chief Justice Earl Warren, whose words in the Supreme Court’s historic decision in Brown v. Board of Education ring as true in our moment as they did decades ago:

“Education is perhaps the most important function of state and local governments. … It is the very foundation of good citizenship. … Such an opportunity, where the state has undertaken to provide it, is a right which must be made available to all on equal terms.”

Radcliffe Day, which concludes Harvard’s Commencement week, will include an expert panel titled “Higher Education Access and the American Workforce.” This year, the panel will envision bold new ways forward by engaging the critical question of how to build an education system that is accessible and equitable to all — one that enables students of all backgrounds, interests, and abilities to secure stable livelihoods as members of a changing workforce.

“Higher Education Access and the American Workforce” will be moderated by Raj Chetty ’00, Ph.D. ’03, and will include Anthony P. Carnevale, Leslie Cornfeld ’81, J.D. ’85, Pam Eddinger, and Donna Shalala.

Following the panel discussion, Ifill will engage in a wide-ranging keynote conversation with Martha Minow, Ed.M. ’76, RI ’18, the 300th Anniversary University Professor at Harvard University and a former dean of Harvard Law School. Bryan Stevenson will offer a special video message, and Brown-Nagin, RI ’17, will formally present the 2022 Radcliffe Medal.

For more information on the Radcliffe Medal and Radcliffe Day, including registration, visit the website.