The politics behind ineffective COVID treatments 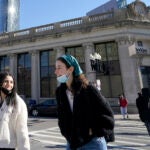 Two treatments that have been shown to be ineffective against COVID-19 — hydroxychloroquine and ivermectin — were more heavily prescribed in the latter part of 2020 in U.S. counties with a higher Republican vote share in the 2020 presidential election, according to a new research letter co-authored by researchers from Harvard T.H. Chan School of Public Health.

“We’d all like to think of the health care system as basically non-partisan, but the COVID-19 pandemic may have started to chip away at this assumption,” said Michael Barnett, assistant professor of health policy and management and lead author of the study.

The study compared prescription rates for hydroxychloroquine and ivermectin with rates for two control medications, methotrexate sodium and albendazole, which are similar drugs but have not been proposed as COVID-19 treatments. Researchers looked at deidentified medical claims data from January 2019 through December 2020 from roughly 18.5 million adults across the U.S., as well as U.S. Census data and 2020 U.S. presidential election results.

After June 2020 — coinciding with when the U.S. Food and Drug Administration revoked emergency use authorization for hydroxychloroquine — prescribing volume for the drug was significantly higher in counties with the highest Republican vote share as compared to counties with the lowest vote share.

As for ivermectin, prescribing volume was significantly higher in the highest versus lowest Republican vote share counties in December 2020 — 964 percent higher than 2019 overall prescribing volume. The spike aligned with several key events, such as the mid-November 2020 release of a now-retracted manuscript claiming that the drug was highly effective against COVID-19, and a widely publicized U.S. Senate hearing in early December that included testimony from a doctor promoting ivermectin as a COVID-19 treatment.

Neither of the control drugs had differences in overall prescribing volume or in prescribing by county Republican vote share.

The findings suggest that the prescribing of hydroxychloroquine and ivermectin could have been influenced by physician or patient political affiliation, the authors concluded. “This is the first evidence, to our knowledge, of such a political divide for a basic clinical decision like infection treatment or prevention,” said Barnett.