For $800, name a College senior who is competing in iconic TV game show 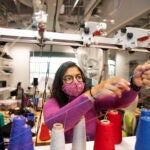 A place on the cutting edge

Neha Seshadri shares what it’s like behind scenes of ‘Jeopardy! National College Championship’

Turns out that when you’re on “Jeopardy!,” it’s not necessary to yell out your answer (in the form of a question, of course), as some do while playing at home. That’s one of the lessons Neha Seshadri learned while on the iconic quiz show. The economics concentrator grew up watching the show every night with her family in Ann Arbor, Michigan, and she admits to having been one of the ones who screams answers at the TV. After an intensive casting process, Seshadri was flown out to LA to tape the championship show in November, and it started streaming on Hulu and ABC on Tuesday. It features 36 college students from across the country, battling it out for the $250,000 grand prize. Seshadri’s episode will air Thursday at 8 p.m., and she shared some of what it was like, though the show prohibits contestants from giving away too much before an episode airs. This interview was edited for clarity and length.

GAZETTE: What was your experience with “Jeopardy!” growing up?

SESHADRI: I grew up watching the show with my family. It was a nightly thing; we’d have dinner and then watch an episode. My family is really big on it, so I grew up shouting answers at the TV.

GAZETTE: How did you get on the show?

SESHADRI: It was quite a long process, I think because of the pandemic. It started with a test that anyone could take online, then there was a proctored test, a mock game, and an interview. It took about eight to nine months, so it was exciting to get the call. We filmed right before Thanksgiving break. It was a long process that I was very glad ended successfully.

GAZETTE: How did your friends and family react?

SESHADRI: It’s so funny because you’re sitting on that information, but you can’t tell anyone. It’s so fun to finally be able to share it. My close friends were really excited. I made an Instagram post about it, and there was screaming coming out of all the rooms in our apartment. Some people were standing on the couch. I have nine roommates so there was a lot of screaming.

GAZETTE: Who else do you have cheering you on?

GAZETTE: How did you feel going into taping the show? What were you most excited about?

SESHADRI: I was excited to see behind the scenes of the show I watched growing up and to meet all the other contestants. It was a different format with 36 people, and it was going to be on prime time. I was also excited to go to LA!

GAZETTE: Were there any particular categories you thought you might have an advantage in?

SESHADRI: The interesting thing about “Jeopardy!” is that it’s really hard to prepare for. When you’re up there, you only have a few seconds to answer. When I went into it, I didn’t want to be in the mindset of categories I liked versus ones I didn’t. I was excited about being on the show, period.

GAZETTE: What was the experience like onstage versus when you’re just an audience member watching at home?

SESHADRI: There are very real stakes when you’re answering. You think a lot more about it. There are definitely moments when you think, “Oh, man, if I had more time I would’ve gotten it.” I wouldn’t fault anyone for missing anything — or myself. There are 20 minutes of really solid, intense gameplay, and in that anything can happen. It’s great to experience that live.

GAZETTE: What was it like meeting the new host, Mayim Bialik, after growing up watching Alex Trebek?

SESHADRI: Alex Trebek’s passing was very sad and a very big moment in terms of watching “Jeopardy!” I had a great experience with the host. She said she felt like we were all her kids. It’s really cool seeing someone you see on TV and on the red carpet right in front of you.

GAZETTE: Are there any memorable behind-the-scenes moments that you’ll have stories about for years to come?

SESHADRI: There was a lot of bonding that you really don’t see onstage. We watched the taping of all the games, and it was really fun being an audience for the competition. There was also after-hours bonding on the buses and the hotel we all stayed at. At the end of the day, it’s just a bunch of college students hanging out together.

To me, it didn’t feel like a very intense competition atmosphere. There’s a nice camaraderie going on. On the breaks, the producers would tell us we were doing great or tell us to drink water. If someone didn’t have a good round, they’d tell them to shake it off. It was a very supportive environment and collaborative atmosphere, which might surprise a lot of people.

GAZETTE: How do you feel about representing Harvard in the National College Championship?

SESHADRI: Harvard is a very special school and with that comes a big legacy and a big history. I went in wanting to do the School proud, and I was really excited to represent a school with such a storied history behind it. It’s a proud moment for me as a College senior.