When babies see people swap spit, they know what’s what 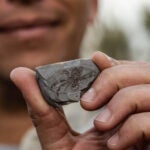 The ‘platypus’ of crabs

A new study by Harvard and MIT researchers, including psychologist Elizabeth Spelke, shows that children as young as 8 to 10 months old infer two people are likely in a close relationship if they see them having interactions that involve a transfer of saliva.

Such activities include kissing, taking bites out of each other’s food, and sharing the same fork or straw. The study indicates that babies understand all of these activities as social cues indicating whether people are on casual terms or share stronger bonds.

The research, published in Science, also suggests babies glean from such gestures whether those involved are likelier to comfort one another if something stressful comes up — say, if one of them starts crying.

Lead researcher Ashley Thomas says the experiments involved fuzzy puppets, orange slices, and saliva-dipped fingers and were performed under the watchful eyes of infants and toddlers, ranging from 8 to 18 months of age.

The children were shown two sets of videos, some of which involved examples of saliva-sharing and some of which didn’t. In one set, a woman took a bite of an orange slice then placed it in the mouth of a fuzzy blue puppet before taking it back for another nibble. The infants and toddlers then were shown a different woman passing a ball back and forth with the puppet. The last video showed the puppet seated between both women before it starts crying and droops its head.

“The question is: Who do the infants and toddlers expect to respond to the distress of the puppet?” said Thomas, who is now a researcher at MIT but started this work as a researcher in Spelke’s Harvard lab.

The babies consistently looked first and much longer at the woman who’d shared the orange slice than the woman who just passed the ball.

As a control the two same women were also shown with a new puppet to a different group of infants and toddlers. Neither shared an orange slice with the puppet, and when the puppet started crying, the babies spent an equivalent amount of time looking at each of the two women. This indicates the determining factor for the children who looked to the woman who shared the orange slice was the relationship the babies assumed between the puppet and the woman.

Researchers also showed the babies a new set of videos with a purple and a green puppet. In these videos, a woman touched her forehead, touched the forehead of the purple puppet, then her own forehead again. The same woman then put her finger in her mouth, put it in the mouth of a green puppet, and then back in her own mouth.

The woman then sat between the puppets and acted as if in distress. The babies largely turned their focus to the puppet who’d shared saliva with the woman, signaling their expectation that it would most likely be the one to offer help.

Researchers said the study showed that infants and toddlers recognize what are called “thick relationships,” ones characterized by enduring obligations and attachments. The work also highlights what may be an inherent interest in babies to learn to identify social structures and close relationships between people by seeing how they interact.

“The primary feature of a human infant is they can do almost nothing, and they know almost none of the things that we know,” Spelke said. “Most of the things that we spend our time thinking about probably don’t matter to an infant at all. … But infants seem to care about this, and they seem to be spontaneously interested in this. That I think sends up a signal that this may be something that’s actually culturally really important to human beings.”

The experiments were conducted over Zoom with Brandon Woo, a student in psychology at the Harvard Graduate School of Arts and Sciences and researcher in Spelke’s lab who played a key role in logistics.

In addition the researchers did some slightly different but related work with 5- to 7-year-olds. They found that when it came to sharing things that could be divided easily (like pieces of candy or toys) and things that couldn’t be divided (like a scooter), the children thought it would be just as likely that someone might share with either friends or family. But they thought interactions that involved saliva-sharing (like eating applesauce with the same utensil) were likelier to involve just family.

The team plans to keep looking at infants, toddlers, and young children’s abilities to recognize thick relationships. They want to know how early in life babies possess this knowledge.

Thomas, who has a toddler at home, has a strong feeling it starts pretty young.

“My husband at this point is really sick of me filming every time that my kid feeds one of us or does a saliva-sharing interaction,” she said.