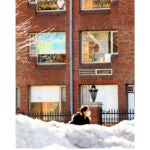 At a meeting of the Faculty of Arts and Sciences on Feb. 1, 2022, the following tribute to the life and service of the late Alberto Francesco Alesina was spread upon the permanent records of the Faculty.

Alberto Alesina, a deeply loved and respected colleague, friend, and mentor in the Harvard Department of Economics, was one of the founders of modern political economy. It is hard to overstate the impact he had on economics. He took a genuinely interdisciplinary approach that combined economics with political science, sociology, history, and even cultural anthropology. His work inspired countless researchers to ask big questions and be passionate about seeking their answers.

Alesina was born in Broni, Lombardy, not far from Milan — a city he adored. He graduated in economics and social sciences from Bocconi University in 1981 and obtained his Ph.D. in economics from Harvard in 1986. Except for two years at Carnegie Mellon University, as a postdoctoral fellow and subsequently an assistant professor, Alesina spent his whole career at Harvard, becoming full professor of economics and government in 1993 and the Nathaniel Ropes Professor of Political Economy in 2003.

He was the founding director of the National Bureau of Economic Research (NBER) Political Economy working group. Under his leadership, the NBER’s Program in Political Economy was established in 2006 and the NBER’s political economy community grew and diversified immensely. We remember how proud he was of the fact that, at the last in-person meeting in 2019, one of the biggest rooms available at the conference venue could barely fit all participants in his working group. Alesina served as chair of the Department of Economics between 2003 and 2006 and was widely respected in that role. He is remembered as a fair and diligent co-editor of the Quarterly Journal of Economics between 1999 and 2004. He was a fellow of the Econometric Society and a member of the American Academy of Arts and Sciences.

Alesina’s research has been seminal across a range of fields. In the 1980s, his work was driven by the fundamental realization that “politics” (i.e., the process through which economic policies are de facto designed and enacted) was missing from macroeconomics. He combined the tools of dynamic macroeconomics and game theory with political science. His key contributions during that time shed light on political cycles — the connection between electoral, budget, and business cycles — and on the link between politics and inflation. Alesina fostered our understanding of the impacts of fiscal consolidation programs and the electoral consequences of austerity, issues that became highly topical in the aftermath of the financial crisis.

He never shied away from asking the biggest questions, working on the link between growth, economic development, and politics. He developed frameworks for thinking about the formation of nations, economic integration, and currency areas. He studied the implications of ethnic, cultural, and religious fractionalization on institutions, democracy, conflict, public goods, and development. His work was rigorous and sharp, but he never let worries about statistical challenges or technicalities dissuade him from tackling ambitious issues that he was passionate about.

Alesina also extensively contributed to developing the modern field of research on culture and economics, studying the role of family ties, institutions, and social background. In his last years, he became passionate about citizens’ perceptions of the political process and kept producing an impressive number of highly cited and influential papers.

Alesina remained deeply connected to Europe. He regularly visited his alma mater, Bocconi University, interacting with colleagues and co-authors and mentoring many young aspiring economists. Deeply invested in the next generation of economists from Europe, he took up hosting many visiting students over the years. He contributed to Italian and European debates through his regular columns in Corriere della Sera and his writings in VoxEU. He was also pivotal in contributing to the activity and research of the Center for Economic Policy Research (CEPR).

It is impossible to write about Alesina without mentioning his immense and contagious joy and enthusiasm. All his co-authors and colleagues agree that working with him was not only enriching and stimulating—it was fun. His self-deprecating and witty jokes in seminars, faculty meetings, lunches, or conferences never ceased to lighten the mood and make every event more enjoyable. Despite his amazing success, he remained deeply grounded, generous, and humble.

Alesina was a most beloved mentor in our department and among many students across different institutions. He truly nurtured young economists. Because he was so genuinely kind and empathetic, students looked up to him with admiration, respect, and an obvious affection.

Alesina adored his wife, Susan, to whom he was married for 20 years. Their admiration and love for each other was palpable. He was also close with his family, especially his sister, Roberta. The siblings often went on adventurous trips together, hiking and skiing.

They spent several weeks a year in their retreat in Courmayeur in the Italian Alps. In fact, Alesina proposed to Susan while caught in a blizzard on the Haute Route from Chamonix to Zermatt. He loved the mountains and claimed that his best ideas came to him “on the slopes” or “on the ski lift.” He always joked with his co-authors that “if the weather is bad for skiing, it’s going to be good for our paper.”

He died on May 23, 2020, while doing one of the things he loved so much: hiking with his beloved Susan. During the days that followed, the outpouring of sadness and expressions of grief from across the world were yet another reminder of how loved and respected he was. His passing leaves a gigantic gap. We all miss him terribly.