Dancing on the ceiling — of the world 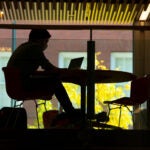 Unable to see in front of him, Nosher Ali Khan stood carefully on the 19,850-foot mountain, trying to decide what to do next. He was stuck in the middle of a whiteout with a team of mountaineers, artists, filmmakers, and support workers. Moving forward wasn’t possible, because the cloud cover had reduced visibility to 2 percent.

“A lot can go wrong on a mountain,” said Khan, a sophomore economics concentrator from Hunza, Pakistan. “When nature isn’t on your side, you’re supposed to head back to safety.” He was on his way to summit Minglik Sar in the Karakoram Range of Pakistan in pursuit of a Guinness world record.

Fifteen minutes later, the clouds lifted, clearing the way to the top. Reaching the summit was “the most magical thing I had ever seen,” said Khan, who now holds the record for Highest Altitude Dance Party on Land — an event fueled on traditional folk tunes and EDM. “Taking that amount of equipment and doing the logistics of the summit had never been done before, and so many things could have gone wrong. We were lucky that so many things went right.”

Khan’s spot in the history books represents an offbeat achievement in itself, but it was also part of a more serious effort to preserve traditions and honor his native country’s mountaineering culture. It marked the culmination of 10 months of planning and training, and was a pursuit of pride for Khan, who is a champion for his relatively isolated and culturally rich community.

“Growing up here, I led hikes and translated for foreign mountaineering groups, and so many people here act as guides, porters, and translators for Western people,” said Khan, noting many of these workers earn about $8 per day, without insurance. “I realized how problematic this system is where locals put in so much effort but their efforts are going unrecognized, both in financial terms and in terms of recognition. I wanted to show the world an all-local mountaineering expedition because we can execute every part of this ourselves.”

As a child, Khan was steeped in the cultures of music and mountaineering that pervaded daily life in Hunza, located in the northernmost region of Pakistan, bordering India, China, and Afghanistan. The local language, Burushaski, is unrelated to any others, with about 100,000 speakers and no written script. Burushaski poetry is also an important part of a local folk music form called bazm, which involves community gatherings and audience participation and was an important part of the dance party mix. The area is home to a rich mountaineering tradition, with many locals working in the extreme trekking tourism industry.

Khan noticed that more people were adopting Urdu, the official language of Pakistan, moving away from local folk traditions, and growing more economically dependent and deferential to Western tourists on the mountains despite their own expertise. In the face of these changes, “I wanted to highlight some really important things about Hunza on a world level,” said Khan.

Khan’s physical journey to the peak of Minglik Sar started this summer, but his academic path to the world of music preservation started in his first year at Harvard, when he took a course on Muslim devotional literature in contemporary societies with Ali Asani, Murray A. Albertson Professor of Middle Eastern Studies and professor of Indo-Muslim and Islamic religion and cultures.

“That class made me want to understand more about my own community,” said Khan. “I’m the first student from my community to come to Harvard College, and due to the limited number of speakers, there is little work being done in preservation and documentation of this language, poetry, and music. I wanted to use the knowledge I gained here to understand my home better.”

With a grant from The Lakshmi Mittal and Family South Asia Institute, Khan spent the summer of 2020 recording and filming bazmi gatherings for a web series. He also interviewed musicians and local community leaders about their perspectives on preservation and the cultural resonance of the practice.

After taking a leave of absence for the 2020-21 academic year, Khan started looking for another project in support of his community. After brainstorming with artists he knew and poring over existing records, he realized they could break the dance party record in Hunza’s mountainous backyard (the previous record was held at Mount Kilimanjaro with a peak of 19,330 feet).

He recruited a team and reached out to corporate and nonprofit sponsors for funding, some of which would be given to a local mountaineering institution after the climb. The group trained under expedition leader Ali Musa, and other members included Saad Ata Barcha, the expedition manager; Zulqarnain Saleem, Mohsin Kamal and Hasnain Salim, filmmakers; DJ Ghasuray, Noman Asmet, Rameez Qara, and Junaid Alam, artists; and Misyab Zapoo, who coordinated logistics.

In early July, the group began the monthlong trip with a four-day drive from Hunza to Minglik Sar basecamp. Then they set out through the Shimshal Pass, and braved the whiteout, oxygen depletion, and cold temperatures on their climb upward. On July 25, after starting the climb at midnight, they reached the top. Then they set up their equipment — praying the generators would work — and danced like they’d just set a record.

After safely descending the mountain and returning home, the group used their sponsorship money to establish educational programming for locals at the Shimshal Mountaineering School, with plans to run for at least the next two years. And Khan started his sophomore year at Harvard a month later with a more open approach to his future.

“My life felt very structured before College, but this past year helped me understand that once you put in the work and have people supporting you, anything in the world is possible,” he said. “I can get a Guinness World Record or ace a class here. It’s just another mountain to climb.”