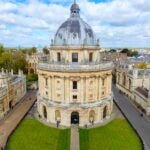 Maggie Chen ’22, who is concentrating in human developmental and regenerative biology with a secondary concentration in history of science, will pursue a master’s degree in bioengineering at Imperial College London as a Marshall Scholar. She is one of 41 winners in the latest round of the annual awards, which were announced Monday.

As a student at the College, Chen has focused on developing the tools she’ll need to bridge the gap between bioengineering and stem cell biology. A heart disease seminar she took her first year on campus led her to join Richard T. Lee’s lab at the Harvard Stem Cell Institute as a research fellow.

“My research really focuses on understanding the transcriptional regulation behind heart regeneration,” she said. “We can try to reprogram heart cells into a more proliferative state, so they can heal the heart after injury. I like to joke that we try to mend broken hearts in our research.”

When she’s not fixing broken hearts, Chen combines her interest in science with a love for writing. An introduction to journalism class inspired her to write about influential women in science.

“One of my biggest passions over the past couple of years has been being a science journalist and writing about science in a way that is approachable and accessible to the general public,” she said. “That goal is a big part of what I hope to do, [which] is to really emphasize and amplify the voices of women and other marginalized communities in science, so that they can really be put in the spotlight.”

Chen credited Lee and other mentors with helping her become a better scientist and for reminding her “why we do science and who we do science for.” The 21-year-old San Diego native said that receiving the Marshall speaks to the “unparalleled level of support and community” she found at Harvard. She has high hopes for her studies in the U.K.

“Ultimately, my goal is to become a physician-scientist,” Chen said. “I’m hoping that through this degree, and through future graduate study, I can really build this interface between bioengineering and stem cell biology or basic biology, both to understand disease mechanisms [and] also to develop translational therapeutics for usage in the clinics to really help people.”

Marshall Scholarships, founded by a 1953 Act of Parliament and named in honor of the U.S. general and statesman George C. Marshall, are given annually by the Marshall Aid Commemoration Commission to up to 50 American students. Granted for one or two years, the awards cover university fees, living expenses, and other costs.