Negotiating the irrational with Daniel Kahneman 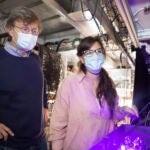 Nobel-winning behavioral economist and author of ‘Thinking, Fast and Slow’ shares advice on how to influence others

How do you convince someone to do something they don’t want to do? Like, for example, get vaccinated, reject prejudices, or accept your terms? “You begin by asking ‘Why not?’ instead of ‘Why?’” Nobel Prize winner Daniel Kahneman said at a Harvard event last week. “It’s the best idea I’ve learned in psychology.”

That’s saying a lot. The behavioral economist pioneered new ways of thinking about human judgment, intuition, and decision-making, arguing that people are far more irrational than previously assumed. His work has influenced how psychologists, economists, philosophers, and health care providers think about their work. For many, his ideas may be some of the best they’ve learned in psychology.

Kahneman joined the Harvard Program on Negotiation’s Daniel Shapiro on Friday afternoon for an online discussion, “Negotiating, Fast and Slow” (a nod to Kahneman’s well-known book, “Thinking Fast and Slow”). President Larry Bacow introduced the conversation, which was designed to apply Kahneman’s insights on human behavior to yet another field: negotiation, whether in government, business, or family life.

Kahneman, 87, is a professor of psychology and public affairs emeritus at the Princeton School of Public and International Affairs, Eugene Higgins Professor of Psychology Emeritus at Princeton University, and fellow of the Center for Rationality at the Hebrew University in Jerusalem.

As a teenager, Kahneman said, he was less interested in typical existential questions — like whether God exists — and more so about the people behind the questions, asking instead why people believe in him (“or her,” he added).

“I was interested in errors and illusions,” Kahneman said.

But his professional interest in human judgment and decision-making didn’t really take off until he met research collaborator Amos Tversky, Kahneman told Shapiro, the founder and director of the Harvard International Negotiation Program, an associate professor of psychology at the Harvard Medical School/McLean Hospital, and an affiliate faculty member of the Program on Negotiation at Harvard Law School.

A lot of Kahneman’s groundbreaking book was based on decades of research, much of which he did with Tversky, a cognitive psychologist and MacArthur Fellow who died in 1996. In it, Kahneman argues that humans use two primary systems of thinking. System one — thinking fast — is often driven by emotions, intuition, and impulses. System two — thinking slow — tends to be more rational, deliberate, and analytic. “Good negotiators,” Kahneman said, “are in control, meaning that their system two is at work.”

“You should inform your gut and then trust it.”

But that doesn’t mean intuitions can never be trusted, he continued. “Our intuitions when we drive are excellent.” And with loved ones, “One word on the telephone, and you know their mood.” The reliability of fast thinking depends on three factors: how predictable the object or activity is, how much practice the actor has, and how much feedback they’ve received on the accuracy of their judgments.

Yet in most cases, people make decisions based on their first gut impression. For example, interviewers, Kahneman said, often judge their candidate in the first few minutes, and spend the rest of the interview justifying their decision. “Delay your intuition,” Kahneman advised. Slow down. Sleep on it. Break the problem into smaller parts.

“You should inform your gut and then trust it,” Kahneman said.

What about someone else’s gut? Can you influence theirs? Absolutely, according to Kahneman. The better question is: What’s the most effective way to change someone’s behavior? Picture a ball with two strings pulling it in opposite directions, he said. There are two ways to move that ball: Pull one string harder or reduce the tension in the other. In negotiation, pulling harder equates to offering promises, threats, or arguments. But reducing tension — changing the environment to make it easier for the person to move in the direction you want — is almost always more effective.

Kahneman also stressed the importance of empathy in negotiations. Understand the other’s wants, emotions, and perspectives, and avoid assuming your intentions are obvious, he said. Others may not see you as you see yourself.

In the second half of the conversation, three undergraduate students, Eura Choi, Nim Ravid, and Lucas Woodley, all members of the Harvard College International Negotiation Program, took turns asking Kahneman questions about issues such as resistance by some to the COVID-19 vaccine (which he thinks would have already been solved if there was a clear and sensible way to overcome it) and racism and stereotyping (which he thinks are inevitable in thought but unacceptable in practice).

He was also asked about the role of optimism in success, whether cultural differences affect fundamental human behaviors, how to handle heartbreak, and other head-spinning questions. Understandably he didn’t have answers for everything.

“That’s a difficult question,” Kahneman often responded, or “I don’t know how to answer that,” “I don’t have anything interesting to say,” and “I don’t have enough information.”

At one point it was as if the psychologist intended to illustrate his own theory. He was asked how new technology might influence humans thinking fast or slow. “In the absence of data,” he answered quickly, “I would be a pessimist.”

Then he paused and added: “But that doesn’t say anything.”