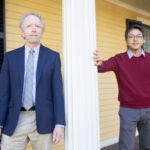 Streaming accounts for about 85 percent of today’s music consumption, but sales of vinyl records have grown steadily over the past decade, owing to their rediscovery by members of Gen Z who view them as a timeless medium that offers richer sound quality. In fact, the popularity of vinyl has grown so rapidly over the past 18 months of being home-bound by the pandemic that many of the world’s pressing plants are backed up with orders until 2023.

The Gazette spoke with Caren Kelleher, a 2010 Harvard Business School graduate who left Google to start a pressing plant in Austin, Texas, in 2017, and Ryan Raffaelli, Marvin Bower Associate Professor at Harvard Business School, to learn more about the vinyl renaissance. The interview has been edited for clarity and length.

GAZETTE: Why have vinyl records come back into favor with young consumers?

KELLEHER: You’ve got a generation of kids now for whom music has always been a free commodity. The more that we talk to college students and teenagers about why they buy vinyl, the common thread is that having vinyl in your dorm room or your house says something about you and who you are.

I think this past year, when we saw explosive growth in vinyl, had a lot to do with people being home and saying, “I’m here a lot. I want a vinyl record player. It’s cool. It speaks to who I am outside of Zoom windows.”

Vinyl is really interesting because I can’t think of many other products that kids will buy that were cool for their parents. Usually it’s like, “Oh, my parents like that stuff. I don’t like it.” But vinyl really does transcend all generations.

GAZETTE: Back in its heyday, pressing a record was relatively easy. The major labels used to own plants to ensure they had enough product to keep record store bins stocked. What does the landscape look like today?

KELLEHER: In North America, I estimate there are probably 20 plants of various sizes. You’ve got the large ones like the United Record Pressing plant in Nashville and Erika Records in Los Angeles that might have 20 machines, which do a lot of work for the major record labels. The major labels don’t own their own means of manufacturing anymore, and they’re the ones taking most of the capacity. Most vinyl pressing actually happens in Europe. There are probably six or seven huge plants in Europe.

“The more that we talk to college students and teenagers about why they buy vinyl, the common thread is that having vinyl in your dorm room or your house says something about you and who you are.”
— Caren Kelleher

GAZETTE: The unexpected surge in demand during COVID has led to huge manufacturing delays, forcing even stars like Taylor Swift or Adele to wait months for vinyl copies of a new release to be pressed. What’s been your experience?

KELLEHER: I don’t think it’s necessarily supply-chain-related. Some of it is. For example, I put in orders for new machinery in March. In a normal world, it should have been here by July. We’re not going to get it till January because the parts are harder to come by; there are restrictions on how many people can be in a factory manufacturing machinery. We’re having a hard time getting parts for the machines.

But what’s happened to us is most of our clients are upping their order sizes. They’ll say, “I only want 2,000 records.” They’ll put the order in and then say, “We sold through that too fast. We need 6,000.” So, all of our capacity planning has been thrown off by how much demand there is. Because capacity is so hard to come by, I’m seeing record labels panic-ordering more than they might have in normal times because most of the pressing plants in North America aren’t taking new orders till 2023 at this point. If you can find capacity, people are grabbing it up.

GAZETTE: How long does it take to fill an order as compared to pre-pandemic and why?

KELLEHER: We averaged six weeks turnaround time on all projects in 2019, 12.5 weeks in 2020, and 27 weeks in 2021. Orders are bigger. If a machine part breaks and it takes us longer to get it, that means we’re down for longer. There have been some supply-chain issues. We had a cardboard shortage. We had to wait eight weeks for cardboard boxes that normally get here in two weeks’ time. The cost of plastic has also gone up about 30 percent year over year, largely because of the freight surcharges. That plastic comes from abroad, and it’s being held in boats outside Long Beach and LA.

GAZETTE: Given how trendy it is now, will vinyl continue to grow after COVID?

KELLEHER: I don’t see vinyl shrinking away again, but I do worry that, as an industry, if we can’t get more capacity online to lessen turn times, fans will move on to other ways to spend money, whether that’s cassettes or digital content. My fear is that the growth of the industry is going to be limited by capacity.

“Whenever you have demand exceeding supply, particularly for a cultural product or a product that’s seen as art, that often increases demand even more.”
— Ryan Raffaelli

GAZETTE: Why do a few older technologies, like vinyl, fountain pens, and mechanical watches, enjoy a renaissance while most do not?

RAFFAELLI: When you see re-emerging technologies re-enter the market, it’s largely because their value extends beyond the use value of the product itself. Meaning: There are other values that the consumer attaches to the product or the experience of using the product that become core. There’s a cultural component to it; it can often be attached to art. There’s an emotional element to using the product. It can often be about reconnecting with one’s past or a nostalgia. But it’s not just that. For just pure nostalgia products, you have collectors. But they’re a very small group. They often will eventually fade away as they age. But that’s not what we’re seeing with vinyl, with fountain pens, with independent bookstores, and with mechanical watches.

Technology re-emergence is really a redefinition strategy. It’s redefining the product as something more than just the medium by which you use it. For watches, it was not just about precision, it was about precision plus craft. The more precise one is, if it’s handmade, this demonstrates excellent craftsmanship. But if you compare it to a quartz-battery-powered watch or Apple Watch, it’s 30 times less accurate. So, you have the use with a redefinition, and recombination with something else. That then allows you to redefine it on its own terms. It no longer competes directly with the new technology. It’s something quite different.

GAZETTE: The technology of vinyl has not changed much, so how is it being redefined?

RAFFAELLI: I think key is, where’s the value attached around this notion of authenticity? For vinyl and some of these others, it’s attached to the way the product is made. In watchmaking, for example, the idea that there might be some automation, but still some assemblage by hand, is really important. The more you move toward handmade, the more it becomes an art form, and the price can go up. That’s a key differential. When craft becomes a part of the value proposition, as a manufacturer, you’re thinking about how do I preserve the craft in the process of producing it?

On the consumer side, it’s a whole different thing. It’s how tastes get manufactured and then, how producers then sell this to the consumer. If you look at vinyl right now, it’s a very small segment of the market, but it has a very important, symbolic role. The vinyl record is an extension of the craft of making music, another way to connect with the consumer. And it’s a specialty product. So even if consumers aren’t buying it, the reason why the artists care about the vinyl is because it’s an extension of their craft and a medium that communicates the care that went into creating their art in the first place.

GAZETTE: With such high demand and long delays getting product out the door, should Caren and other manufacturers worry about consumers moving on to something else?

RAFFAELLI: Whenever you have demand exceeding supply, particularly for a cultural product or a product that’s seen as art, that often increases demand even more. Rolex for the last 10 years has had huge supply issues and that has only helped, tenfold, the demand for Rolex watches. It only exacerbates the mystique and extends beyond the use value of the product itself. So, my feeling is, as long as artists are communicating how they want the consumer to view them through vinyl, the delays are only going to help.