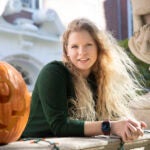 Seminar sifts recordings, history, literature to see how certain qualities became racial signifiers and how that played out in U.S. culture

What does race sound like? A new history and literature seminar taught by lecturer Lucy Caplan, “Sound and Color: Music, Race, and US Cultural Politics,” aims to answer that question as it explores how certain qualities of voice, music, language, and other sounds have become signifiers of race by analyzing songs, films, and novels in the U.S. beginning in the late 19th century.

In addition the course dives into how cultural texts represent race as opposed to other forms of identity, such as gender, class, sexuality, and citizenship, and how those products can reinforce or challenge the social, cultural, and political order and what happens when they do.

“Sound and Color” delves into such issues as the music created during the Harlem Renaissance to discussions about race and representation in Lin-Manuel Miranda’s “In the Heights.” Caplan said she hopes her students will become more critical listeners of the sonic color line, a concept that comes from the work of W.E.B. Du Bois and is analyzed by Jennifer Lynn Stoever in the book “The Sonic Color Line: Race and the Cultural Practices of Listening.”

“These are places to think through that relationship between race and sound, and in doing that thinking through, we might start to unlearn and dismantle some of the preconceptions we have about how sound is ritualized,” she said.

“It’s been interesting to explore the way in which music has been oppressive,” Jetta Strayhorn ’25 said. “We see art, oftentimes, as a form of expression that can’t be held down but even art can be held against you. It’s so interesting to see how Black people and communities of color have overcome [that].”

Strayhorn has the unique perspective of being the sole Black student in the class of 10, which she said has allowed her to bring a different point of view to group discussions with her fellow classmates.

“A lot of the times, we’ll have conversations where they [say], ‘Oh, we should leave this to Black people to allow them to do it and treat the history how they want to.’ And I think it comes from a point of view of wanting to reprimand white people so much that the work ends up falling on Black people,” Strayhorn said. “Then here I come saying, ‘Hey, let’s make sure that we’re not putting all the work on Black people’s backs again.’”

These frank class discussions on the racialization of sound have prompted some white students to analyze how they interact with work created by people of color, according to first-year student Serena Jampel ’25. Jampel said that a reading on white women musicologists forced her to confront her own feelings and actions as a white woman.

“We read an excerpt from ‘Modernity’s Ear: Listening to Race and Gender in World Music’ by Roshanak Kheshti about how white women musicologists were a huge presence in recording Native American stories and songs, often under dubious or exploitative circumstances. The assignment was to make a recording, and after reading about that history, I felt uncomfortable recording someone else,” Jampel said.

Instead, she chose to record herself reading Langston Hughes’ “I, Too,” which still gave her some pause. Jampel said that she wasn’t sure whether recording Hughes’ poem in her voice was against what the Harlem Renaissance great would have wanted.

“There is so much history of white people co-opting and profiting off recording people of color and stealing their talent and knowledge,” Jampel wrote in a class assignment.

Strayhorn said she is looking forward to learning about Afrofuturism and its roots in American culture. The third and final unit of the course will delve into the sonic Afrofuturist work of Janelle Monáe, with a particular focus on the artist’s third studio album, “Dirty Computer.”

Both students said they hope to continue crucial conversations that will help broaden their understanding of race as a social construct. Caplan added that students bring fresh perspectives to the issues and are open to learning from perspectives on race and sound they haven’t heard in the past.

“I think what’s been more exciting for me and what I’ve learned from them is just how sophisticated their readings of music and sound are, and analyses of music and sound especially, given that many of them don’t have formal training or background in music theory,” Caplan said. “I learned a lot from them, and I think they learned a lot from each other.”

Strayhorn said that the ways race impact art or the more subjective parts of life are not talked about often enough, despite being so important. “Any class that explores the way systems of oppression impact the subject is amazing,” she said.