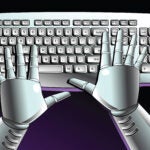 Author and engineer sees world of opportunity in biofabrication

In some ways, says Ritu Raman, an inchworm is similar to a smartphone. Both are machines — one living, one not — that can sense changes in their environments and light up, change color, or make a sound.

But there’s one major difference on which Raman built her career.

“If I pick up my phone right now and throw it across the room, it will break.”

Living cells, on the other hand, can heal, grow, get stronger, and learn, making them a promising foundation not just for biofabricated machines, but also for tissue created from a patient’s cells, organs-on-a-chip for rapid drug development, and lab-made meat.

On Nov. 10, Raman, an assistant professor of mechanical engineering at the Massachusetts Institute of Technology, outlined her new book, “Biofabrication,” in a Harvard Science Book Talk at the Harvard Book Store. Speaking with Jermey Matthews, an editor at the MIT Press, Raman recalled how she started building with biology and discussed what possibilities excite her most in the field.

The daughter of engineers, Raman grew up in India, Kenya, and all over the U.S. Her parents’ projects included communications towers in remote villages, and Raman tagged along, witnessing how technological innovation could change people’s lives.

Because of those childhood experiences, Raman ended up studying mechanical engineering at Cornell University. But an inchworm creeping along a leaf in her mother’s garden stole her mind away from cars, rockets, and robots. No robot can move like an inchworm, she says. But maybe someday?

“If we could build you meat — print you a steak or build you a burger — and it would essentially have the same look, taste, and smell, you may not be able to tell the difference.”
— Ritu Raman

In her lab at MIT, Raman built an inchworm-like robot with lab-made muscles wrapped around a synthetic skeleton. Like living muscles, her robots run on sugar. Because she genetically engineered the cells to move when they sense light, she and her collaborators could control where their “creepy, crawly, inchworm-like robots” wriggled.

“We started seeing right away that they were able to do things regular robots couldn’t do,” Raman said. “They could exercise and get stronger. We could get them to heal from damage. And it was entirely because they were made out of biological materials.”

In her book, Raman describes how biofabricators are engineering materials and machines for everything from medicine and agriculture to defense. Lab-built tissue, for example, could replace tissue too damaged or diseased to heal. Today, new drugs must go through animal trials — close but imperfect approximations of how humans will respond to treatments — and then risky and expensive human clinical trials. Lab-grown organs and cells could mimic a human body’s response and provide a more accurate, lower-risk, and quicker way to design new drugs.

What about building human arms, hearts, or eyes? “It’s one of those things you see in science fiction all the time,” Raman said. “Because we’re afraid of injuries and disabilities. And, of course, we’re afraid of dying.” But building an eye, which needs blood vessels, an immune system, and billions of cells, is “very, very complex,” she said. Simple cartilage is a realistic near-term goal, but an eye will take decades or longer.

Printing a steak, on the other hand, might soon be possible.

“If we could build you meat — print you a steak or build you a burger — and it would essentially have the same look, taste, and smell, you may not be able to tell the difference,” Raman said. Singaporeans can already buy lab-grown chicken and beef. The product is expensive compared with farmed meat, but comes with environmental and other benefits, including lower risk of contamination and the potential for enhanced vitamins and minerals (“Synthesized to meet your dietary needs,” Raman said). For consumers who see animal farms as unethical, lab-grown meat may be worth the price. For chefs, fabricated meat could mean entirely new combinations of animal cells, giving new meaning to the turducken.

Yet lab-grown living cells introduce serious ethical dilemmas, Raman noted. “When you’re building things with living cells, that doesn’t technically mean the thing you’re building is alive.” How do we define it, then? Raman said researchers in biofabrication must consider the ethical implications of their work. Reading superhero comics might help, too.

“Superhero comics allow us to ask questions like, ‘What if you gave someone super-strong muscle and then they became super strong? What kind of ethical implications would that have? What responsibility do they have to their community?’ We can learn a lot from those stories, right? We can use that to spark our imaginations and keep our imaginations in check.”

That imagination eventually could send hybrid robots into space or the deep sea. But for now, Raman’s imagination remains preoccupied with her “creepy, crawly, inchworm-like robots” and how to give them neurons, so they can sense if a surface is slippery, how far to stretch, and more.

“At the end of the day,” she said, “I’m still obsessed with that inchworm.”