Passing the torch of representation 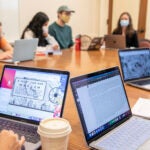 It was a perfect match of artist and subject: a trailblazing Black music historian whose life story is not particularly well known, and a young Black artist whose work aims to turn a spotlight on such hidden figures.

“So much of my work centers Black women,” said Uzo Ngwu ’23 about her latest project, an animated short film celebrating the life and legacy of music historian Eileen Southern, who in 1976 became the first African American woman tenured in the Faculty of Arts and Sciences. “I was really drawn to the story of a Black woman at Harvard and bringing her story to life.”

The documentary, “Light the Way Home: Eileen Southern’s Story,” premiered at the Monday launch of a series of events for the Eileen Southern Initiative, said Carol J. Oja, William Powell Mason Professor of Music and American Studies at Harvard and director of the humanities program at the Radcliffe Institute. The initiative, which Oja called a “collaborative, community-based effort,” culminates in two webinars, a student-produced short film, and a digital exhibit.

Ngwu, who is concentrating in art, film, and visual studies, applied to work on the film for the initiative launched by Oja and co-director Christina Linklater, director of choral activities and senior lecturer on music at Harvard.

The 20-year-old artist, who has collaborated on projects with MTV, Freeform, and Hulu, worked alongside fellow students Daniel Huang ’22 and Devon Gates ’23 in June to highlight Southern’s legacy and her achievements throughout her career.

The student-produced film drew on interviews conducted by graduate students during the last two years with Southern’s colleagues and scholars who have been impacted by her work.

As co-directors, Ngwu and Huang divvied up work for the film, with Ngwu helming the animation and Huang editing interviews and archival material for the narrative portion. Gates produced music for the eight-minute film.

“We wanted to challenge the idea of Professor Southern being an unapproachable, intimidating woman (as depicted in her most circulated photo),” Huang said. Given full control of the creative process, the team decided to incorporate animation to the film, the 21-year-old added. “Uzo had the idea of bringing warmth and friendliness of her character into the animations.”

It was a creative decision that really helped bring the project to life, according to Oja and other members of the team.

“Uzo’s animations are brilliant. They capture the energy and spirit of Eileen Southern –– this positive, forward-looking energy,” Oja said. “There’s a sense of youth to it. With someone like Southern, who retired in her 60s and is no longer living [Southern died in 2002 at the age of 82], we think of someone who’s moving into an older stage of life, [but] this is a young, spunky Southern who’s communicated through the images.”

Oja noted the similarities Ngwu shared with Southern as two creative Black women within the Harvard community. During her career, Southern helped launch the field of Black music studies and was at the forefront of developing the Afro-American Studies Department (now African and African American Studies). Much like Southern, Ngwu has dedicated her time at Harvard to improving representation for Black girls and people of color, especially in creative spaces.

“Both Eileen Southern and Uzo are filled with creative energy and goodwill at spreading the word,” she said. “Uzo is doing so in terms of looking back at Eileen Southern’s legacy. Eileen Southern did so by writing about Black musicians from the past. It’s like a relay in a way, handing the baton. Each reflecting back and doing so in ways that are celebratory and meaningful.”

Ngwu hopes to continue to create imagery that younger Black girls can align with and feel represented by, while also “illustrating the diverse beauty that is Blackness; that is Black women, from our hair to our skin color to the things that we do,” she said.

“It should be normal to see Black girls represented in film. It should be normal to see people of color represented in museums and illustration. It shouldn’t be the norm that whiteness is the only thing that we see,” Ngwu said. “There is nothing weird or abnormal about not being white. I think that’s why representation is important to me, because I want Black girls to realize that everything about them is normal.”

Ngwu is already doing that, leaving her mark on the University and beyond, her co-creators said. “Uzo is such a bright light in the arts scene, especially here at Harvard, and her ability to create in ways that transcend typical boundaries is definitely a model for the future of art-making everywhere,” Gates said.

“Nobody can stop her,” Huang added. “Uzo Ngwu is one to look out for.”