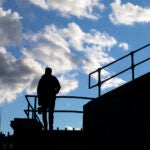 To recognize the Arboretum’s sesquicentennial and its Harvard connection, dawn redwood trees were planted at president’s house

Considering the species’ original journey required tens of millions of years and the crossing of an ocean, the arrival of three dawn redwood trees at the president’s house on Tuesday in Cambridge was a walk in the park.

In the sun-dappled landscape at Elmwood, President Larry Bacow and Adele Fleet Bacow welcomed Arnold Arboretum Director William (Ned) Friedman and colleagues for an afternoon tree planting. Clones of a 73-year-old dawn redwood at the Arboretum were planted to help celebrate the Arboretum’s 150th anniversary in 2022 and honor a relationship dating back to Harvard’s establishment of the Arboretum in Jamaica Plain in 1872.

The Bacows took the lead with ceremonial chrome shovels. (A fourth was planted last April near the Arboretum’s Weld Hill Research Building.) The trees were propagated from hardwood cuttings taken in 2018 from the Arboretum’s oldest dawn redwood (3-48*A), which was accessioned in 1948 as seed and was among the first of its kind to grow in North America in about 60 million years.

Since 1995 the Arboretum’s logo has featured a conical silhouette of Metasequoia gyptostoboides — roots exposed and crowning the Arboretum’s founding year of 1872 — embedded in a Harvard shield to symbolize the Arboretum’s relationship to the University and its mission of botanical discovery, international conservation, and education. For its sesquicentennial, the logo adds the year 2022 to reflect the longevity of its Harvard partnership and 150 years of mutual commitment to deepening people’s knowledge of nature.

Until the late 1940s, the tree was known only by the fossil record. Imprints of its characteristic needle pattern found in North America, Europe, and East Asia allowed scientists to describe what they thought was a long-extinct species.

Then a forester, Zhan Wang, took samples from a mysterious stand of trees deep in a valley in the Hubei Province of central China and worked with colleagues to collect and identify them. Among these was Hsen Hsu Hu, a prominent professor who had studied at the Arboretum was the first person from China to receive a doctorate in botany from Harvard. In 1946, Hu and a colleague announced the discovery that Metasequoia had not gone extinct after all. It was alive and well and living in western Hubei Province.

Elmer Merrill, director of the Arboretum from 1935 to 1946, funded a collecting trip in China to bring back seed. The Arboretum distributed over a kilogram of the tiny, lentil-sized seeds to arboreta and botanic gardens around the world and has since played a crucial role in the tree’s international reinstatement and conservation.

Today you can visit the oldest dawn redwood outside of its native China along Conifer Path at the Arboretum. And in about three years, its clones at Elmwood will likely be 12-foot sentinels of a long and fruitful partnership for understanding global biodiversity.