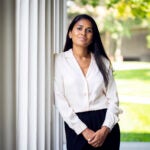 The novelist and essayist Rachel Kushner on Tuesday spoke with James Wood, New Yorker book critic and Harvard professor of the practice of literary criticism, about the “vibe and emotion” of her creative work in an online Writers Speak event sponsored by the Mahindra Humanities Center event.

Kicking off the 75-minute discussion, Wood asked the author about the connection, and differences, between writing fiction — Kushner’s novels include the bestsellers “The Mars Room” and “The Flamethrowers” — and composing essays.

“What’s different between the two is that I know the essays are possible,” Kushner answered. “If I’m diligent and put in the work, I can take an assignment and I can make something happen. Fiction is much more inchoate.”

On the subject of nonfiction, she recalled the process of collecting pieces for her first book of essays, “The Hard Crowd,” which came out in April.

“I really felt I needed one specific through line,” she said, “just a mood or vibe, so that a reader could pick up the book and feel like they’d been on a journey.” Pulling together essays on subjects as disparate as the writer Marguerite Duras and San Francisco’s Tenderloin district, she found that theme. “The essays reflect a certain disposition that may be quite deep in who I am.” The result, she explained, wasn’t that different from her fiction. “By the time I finished compiling the book it was a surprise to me that these essays have as much to do with me as a writer as my novels do.”

Following up on Duras, best known for her 1984 novel “The Lover,” and Denis Johnson, another author discussed in “The Hard Crowd,” Wood queried Kushner about influences. She brought up Nelson Algren and “Blood Meridian” author Cormac McCarthy, whose 1985 classic “made an enormous impression on me.”

Artists in other media have been another potent influence. “I like to look at stuff — to go to galleries and museums and see what people are doing. I’m interested in how artists use their art,” she said. Recalling a trip to Paris, she described visiting the Orangerie and “looking at Monet’s water lilies for three hours. These kinds of experiences are truly precious to me.”

“Music is an interesting analogy for writing,” she said. Kushner explained how her 14-year-old son, a classical musician, has only recently discovered rock ’n’ roll. “He said this music is relaxing because there isn’t a lot of information coming down.” He told her, “I don’t have to think about it; it’s all vibe and emotion washing over me.

“Writing is all three of those things,” Kushner said. “It’s vibe and emotion, but you’re also intricately ordering things in a way that’s not that different from a scale structure.”

Kushner finished by reading the title piece from “The Hard Crowd,” about her first bartending job at The Blue Lamp in the Tenderloin District, before taking questions from the online audience.

Following up on a Kushner comment about writing in a trance-like state, one viewer asked how an aspiring writer could access that same state.

Calling that the “billion-dollar question,” Kushner laughed. “I wish I knew the answer,” she said. But she buckled down and described the daily grind of writing. Beyond discipline and patience, she said, the process includes “taking note of those moments in the day when I feel like I’m able to notice something that nobody else might.”

“Everybody has those feelings,” she said. “And if you train yourself on them and write them down” a writer can “feather the nest to get into that state.”