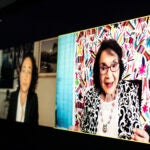 ‘When you’re being an activist, you are making history’

For London Vallery, what began as a law and policy course on the aerospace rights of Native American reservations sparked a passion project that she hopes will become the basis of her future career as a scholar and filmmaker.

“I knew celestial reading always played a large role in my community’s history,” the History of Science concentrator whose focus involves astrophysics says in the opening minutes of her first documentary film. “I knew for direction, weather, time, prayer, and keys to other realms, there was always power in the night sky. But as I was sitting in Boston, learning the intricacies of the observatory, I knew none of the native ways.”

The 19-minute short, titled “Dan Bon Lalinn,” follows Vallery’s father and two other Louisiana natives as they discuss the important role Indigenous astronomy has had in their lives, knowledge lost among younger generations. Vallery’s father, Terry, is a citizen of the Talimali band of the Apalachee tribe native to Louisiana. The Vallerys are one of at least four clans that make up the band, according to the group’s website.

“Dan Bon Lalinn,” which Terry Vallery translates from Creole as “when the moon is right,” began as research London did for Astronomy Department lecturer Alissa Haddaji’s course on Space Law, Policy, and Ethics. The course required writing a legal review on whether reservations have full access from the ground to the Karman line — or the boundary between Earth’s atmosphere and outer space.

As the coronavirus outbreak hit, Vallery was forced to take her research and studies back home. For many of her friends the evacuation from campus was disruptive. But for Vallery the move helped inspire a project that joined what she learned in her work with personal and cultural reflections.

“In my paper, I argue that they did [have access to the Karman line],” Vallery said. “I started looking into it more, and I realized that there was a larger issue when it came to Indigenous peoples and how the aerospace industry is developing.”

The paper quickly made Vallery realize that long legal reviews weren’t accessible to the Indigenous communities she hoped to work with. And so, she decided to use her academic work as a springboard into a docuseries, “Upward Expansion,” on the cultural practices of Indigenous astronomy and how modern-day technology contributes to the loss of generational knowledge among Native peoples.

After wrapping up “Dan Bon Lalinn” in December, Vallery joined the UN’s Space Generation Advisory Council as part of its Ethics & Human Rights Issues in the Space Sector project. She also worked with the Chumash tribe in California as an undergraduate fellow for the Edmond J. Safra Center for Ethics. Vallery’s work with the Chumash, which is part of her “Upward Expansion” project as both a film and a thesis paper, began after she uncovered a story about the tribe’s connection to the Space Launch Complex 6 at the former Vandenberg Air Force Base deep in the Harvard archives, she said.

The launchpad in the central coast of California, best known as Slick Six, faced several setbacks starting in the mid-1960s, including financial shortfalls, construction delays, government program changes and cancellations, and deactivations. The Chumash protested construction at the base during the late 1970s or early 1980s, according to a 2013 Space Review article. Rumors spread that the facility had been built on a Chumash burial ground and the tribe had put a curse on it. Vallery was determined to get to the bottom of the chatter.

She spoke to two elders within the Chumash community about its sometimes uneasy but improving relationship to the aerospace industry. And the curse? Some community elders, who said they had no direct knowledge of it, suggested that it was possible as it aligns with some of the localized practices within their tribal religions, but younger generations view the rumors as “explicit weaponization of indigenous spirituality and a social scapegoating,” Vallery said.

“It’s really quite a bizarre and amazing story,” she said. “I could honestly rant about it forever.”

Vallery hopes her work will help improve Indigenous representation within the aerospace industry, something she said is sorely needed. She said she dreams of working at an organization like the United Nations Office for Outer Space Affairs or in film to make science more accessible to young people like her.

“Astronomy is one of the oldest fields in the world and every single culture has some type of ties to it. Yet, when a lot of people think of astronomy, or space development, it’s a very Western science,” she said.

“I think through representation, we can reimagine what would this look like,” she continued. “I truly think that the aerospace industry has a lot of potential. It’s very young.”

Haddaji, whom Vallery considers a mentor, said she doesn’t doubt Vallery’s work will make an impact. The professor noted that Vallery’s knowledge highlights an area of research that lacks greater visibility.

“I am quite confident London will make the world a better place,” Haddaji said.