My grandfather, a national hero in Lithuania — and a war criminal 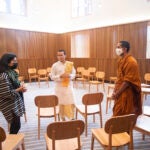 Silvia Foti promised her dying mother she would write about him, but her research uncovered Nazi sympathizer past

It took 20 years for Silvia Foti to finish the book her dying mother asked her to write. But what she ended up with was not the story either envisioned.

Foti’s mother had always planned to one day write the heroic saga of her father, Jonas Noreika, a celebrated war hero and anti-Soviet partisan in his native Lithuania, but she never did. Foti, a journalist turned high school English teacher, set out to carry out her mother’s wish to honor her revered grandfather. However, her research found something unexpected: evidence that he was not a war hero, but a Nazi collaborator responsible for the deaths of at least 8,000 Lithuanian Jews.

Foti chronicled her journey in “The Nazi’s Granddaughter: How I Discovered My Grandfather Was a War Criminal,” which came out in March. In a Tuesday conversation with Mark Kramer, director of the Cold War Studies Project at the Davis Center for Russian and Eurasian Studies, Foti spoke with candor about the difficulties of writing an honest account of her grandfather’s life, the toll it took on her personal life, and how she made peace with his past.

“I grew up hearing a lot about my grandfather being a World War II hero, that he fought against the Nazis and against the communists,” said Foti, who grew up in a tight-knit Lithuanian family in Chicago. “I’m angry that he is held up as a hero. It’s completely unclear how many Lithuanians he actually saved from the communists … But of his role in killing Jews, there’s so much evidence.”

Foti’s book revises the official story about Noreika, who is regarded as a national hero in Lithuania. An Army captain and a lawyer who used the nom de guerre “General Storm,” Noreika was executed in 1947 for his role in planning a revolt against the Soviet Union. In 1997, he was posthumously awarded the Cross of the Vytis, given for “heroic defense of Lithuania’s freedom and independence.” Lithuania became independent in 1990.

In uncovering family secrets and disentangling official historical narratives, Foti’s book highlights the difficulties of correcting historical memory. She said she has been called a traitor and a KGB agent by Lithuanians here and abroad.

Like other countries that were part of the Soviet Union during World War II, Lithuania has yet to acknowledge its complicity with the Holocaust. Nearly 95 percent of Lithuania’s 250,000 Jews were killed during the conflict. Last year, a Lithuanian lawmaker announced he was drafting legislation stating that neither Lithuania nor its leaders took part in the Holocaust, but the uproar that followed prevented him from doing it.

For Foti, the search for the truth about her grandfather sent her on a soul-searching journey. She first heard about his collaboration with the Nazis when she traveled to Lithuania in 2000 to bury the remains of her mother and her grandmother. After she visited a school named after Noreika, the principal made a casual comment regarding rumors about her grandfather’s participation in the killing of Jews.

“It was like someone had punched me in the gut.” Foti recalled.

Foti says she experienced shock, denial, bouts of depression, and an identity crisis while researching her book. “It turned upside-down everything I ever thought about Lithuania, and it completely turned inside-out what it means to be Lithuanian for me,” she said. At one point, she thought her examination could exonerate Noreika, but she had a change of heart when she found two incriminating records among the material her mother had collected. One was a 1933 book he had written at age 22, when he was in the Lithuanian Army, which contained anti-Semitic remarks. The other was a document he had signed as governor of the region of Siauliai, ordering the round-up and killing of 2,000 Jews. In an op-ed article she published in The New York Times, she wrote of her grandfather that “under his watch, roughly 8,000 Jews were killed.”

Foti, who left her job as a journalist to become a high school teacher so she could write during her summers off, has come to terms with her grandfather’s past. She wants the truth to be known.

As for the school named after her grandfather, Foti said it should be renamed after someone who indeed saved Jews from death. More than 900 Lithuanian gentiles have been recognized by Yad Vashem, the World Holocaust Remembrance Center, as “Righteous Among the Nations” for having risked their lives to save Jews during the Holocaust.

For now, Foti looks forward to the paperback version of her book, which will bear a subtitle that she finds more representative of her 20-year-long book project: “A Mother’s Dying Wish Becomes Daughter’s Nightmare.”