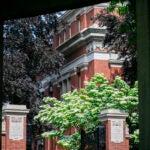 Harvard sailing’s assistant coach Bern Noack shouts a series of commands during a recent practice on the Charles River, where Crimson sails glide along the skyline once again.

After missing last season due to the pandemic, the team got off to a fast start, taking home the Nicholas Barnett Trophy in the season’s second week. Since then the team has won four more regattas, including the Hewitt Trophy last weekend.

“We are very excited to be back on the water competing again,” said head coach Michael O’Connor, who has helmed the team with Noack since 1997. He notes the obstacles, such as integrating many new people onto the team and competing against teams who sailed last year.

“But our players relish a good challenge,” he said.

At a recent practice, the atmosphere was supportive, with seasoned sailors coaching less-experienced teammates on raising sails, tying knots, and other skills.

“It’s been awesome going from never sailing before in Georgia to competing at the top level,” said Chris Wang ’23.

Corinne Lee ’23 said performing at that high level after a year off has been hard, but, “I’m proud of the way our team has been able to put in the work to shake off the rust and sail fast. It’s great to be back on the Charles!”