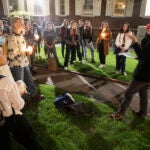 Whitney White has always wondered why she finds the women in William Shakespeare’s tragedies so appealing when so many end up disgraced or dead before the final curtain. But then again, the Brooklyn-based actor and director worries, ambitious women, both on stage and off, often don’t fare much better today.

“Why do Western narratives reaffirm the fact that it’s really hard for a woman to be ambitious and powerful and in love? Why is that a deadly trifecta in ‘Romeo and Juliet,’ ‘Cleopatra,’ ‘Macbeth’ … I am just curious about it,” said White during an online discussion in April with Shakespeare scholars including Harvard’s Stephen Greenblatt.

White plans to examine these questions in a five-part series, commissioned by the American Repertory Theater, that takes a closer look at the trajectory of women in the Bard’s works. The first, “Macbeth in Stride,” began previews Oct. 23 and officially opens this Thursday (Oct 28). It sees the world of the play through the eyes of Lady Macbeth, a woman whose ruthless ambition drives her mad, but not before she urges her husband to commit a few murders along the way.

White believes Shakespeare’s plays address the modern human experience, despite being more than 500 years old. She said that as a Black woman from Chicago, she’s long seen herself and her daily experiences reflected in the world of Shakespeare, and that his work has the power “to speak to all of us … [and] the world as it is now.”

She considers “Macbeth,” the tale of a successful Scottish general and his wife who will stop at nothing to take the throne, a love story gone awry. “At the end of the day, Lady Macbeth and Macbeth are two married people in a kind of toxic relationship going about getting what they want the wrong way. How am I not a part of that narrative? How are you not a part of that narrative?” said White during a recent interview outside the Loeb Drama Center.

White expanded on the negative narratives involving women of power that flood contemporary popular culture and political discourse. She pointed to Claire Underwood in the TV show “House of Cards” cast as the “overbearing Lady Macbeth-type wife” and Hillary Clinton, throughout her presidential runs.

In “Macbeth,” White takes on the role of Lady Macbeth, backed by an ensemble of singers and a four-piece band. She refers to it as concert instead of a play, the story driven forward by music and song. The concert approach makes perfect sense to White, who calls Shakespeare’s iambic pentameter “intrinsically rhythmic and musical,” and considers music the ultimate universal art form.

“I think music is a very equalizing thing. No matter who you are, you probably can rock out to the Doors, Bruce Springsteen, and Tina Turner, red or blue, white or Black, right? And so, I really hope that the music is a way to invite the audience into the inner and emotional lives of the characters.”

Each of the four plays she’s announced thus far (the fifth is a secret) adopts a different musical genre. “There’s something about the history of Scotland that has grit and texture to it the way that vintage rock does,” said White, who based her “Macbeth” soundtrack on the Doors, Nine Inch Nails, and Tina Turner. White’s Othello, “is sadder, more quiet rock,” and borrows from Nirvana and contemporary grunge. Her “Romeo and Juliet” will have more of a “pop, frenetic feel,” while “Cleopatra” will embrace a “soulful sound.”

“I try to let the dramaturgical realities of each piece inform the style of music,” she said.

Music as a narrative force is a natural fit for White, who grew up singing sacred songs in Catholic school and attending Sunday services with her grandfather at an Apostolic church on Chicago’s South Side that came complete with a 40-person choir and full band (“That did it right there,” said White). She went on to study political science and musical theater at Northwestern University, and earned her master’s in acting at Brown University/Trinity Rep.

It was during her last year at Brown that White took on “Macbeth” for a final project, eliminating the words of all the other characters so she could isolate what Lady Macbeth had to say, then adding the dialogue back in, along with the music songs.

During the April online discussion, White addressed the notion of an ambitious woman with nefarious motives, something she’s been grappling with in recent weeks. “Is being ambitious in a system that’s corrupt going to corrupt anyone?” she wondered.

She hopes her work will help shine some light on that and other pressing questions, and, above all, that audiences leave her production eager to see more live performances.

“I just hope we never give up on live arts as a society.”