Spotted at Radcliffe: A brain exploding into rainbows 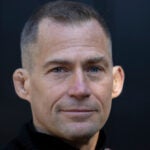 The fiction writer Lauren Groff likens her artistic process to a kind of nuclear fusion, where collisions of creative energy produce narrative force.

With that as her model, it’s not surprising she found inspiration at the Radcliffe Institute, where potent interactions between fellows from disparate fields are an everyday thing. When Groff and her 2018-19 classmate Katie Bugyis had such an exchange, she put aside “The Vaster Wilds,” a novel based on early American captivity narratives, to dive into the life of an abbess from the Middle Ages.

As Groff put it in a December 2020 tweet, she was listening to Bugyis’s fellowship talk about medieval liturgy when her brain “exploded into rainbows.”

“I thought, oh my God, this is the next book,” said Groff, who raced to the front of the room when Bugyis finished. Over coffee not long after, the author peppered the historian with questions and took copious notes. Other conversations followed. Then, last summer, Groff asked Bugyis to be a historical consultant for “Matrix,” the story of Marie, a young woman exiled from the French court by Eleanor of Aquitaine and sent to a remote abbey to live out her days, but who instead revolutionizes the convent with the help of some divine inspiration. The novel was published last week.

“In reading it, there were so many things that I could see that she had gleaned from our conversations, from my presentation, that made appearances,” said Bugyis, a scholar of Christian theology, liturgical practice, and material culture — and also a big fan of Groff’s writing. “It just tickled me to no end, of course, to see that, and just the loving care that she really devoted to rendering these women in ways that I think give them life and complexity.”

For Groff, whose books include “Fates and Furies” and “Florida,” the terrain wasn’t completely unfamiliar. At Amherst College, she initially thought she would major in Medieval French, and was well versed in the writings of the 12th-century poet Marie de France, who inspired her “Matrix” protagonist. She’s also no stranger to juggling storylines. Groff typically works on several books at the same time — a kind of literary insurance policy if one goes awry.

“Most of the time, half of them don’t work out, which is fine if you’ve got three others percolating,” Groff said. “To be able to sort of walk away from a book, knowing that it’s alive, it’ll come back to me, that’s a huge luxury.”

Both her Radcliffe projects have worked out. “Matrix” has been greeted with rave reviews, and “The Vaster Wilds” is on track to be released in 2023. The two novels, which Groff describes as a “loosely thematically-linked sisterhood,” are works of historical fiction, a genre that offers up wide-ranging creative options, she said. She crafted the life of her protagonist in “Matrix” around Marie de France’s “wild and weird and magical” writings. “I created a human based on the work, which is the opposite of the biographical imperative that we see often in profiles nowadays, to feed the biography back into the work.”

For Radcliffe administrators, the robust back and forth that developed between Groff and Bugyis is at the very heart of the fellowship program, which every year brings together 50 artists and scholars for two semesters of research, writing, and invention.

“The kind of intellectual and creative convergence that Lauren and Katie experienced is one of the most moving — and defining — aspects of a Radcliffe fellowship,” said Claudia Rizzini, executive director of the program. “We cannot engineer these links, but we strive to enable them by bringing together great scholars, scientists, writers, artists, and practitioners, and by encouraging interdisciplinarity and fellowship.”

And just as the program intends, the connection between Groff, the Suzanne Young Murray Fellow, and Bugyis, the Joy Foundation Fellow, was mutually beneficial. During their last conversation in Cambridge, the author encouraged the historian to consider branching out from her traditional academic papers and consider writing a work of fiction about an abbess and “extraordinary medievalist” who lived in the 20th century and counted among her friends the playwright George Bernard Shaw.

“I really owe Lauren a lot for that,” said Bugyis. “As much as I love doing scholarship that serves my medievalist cohort of scholars, there’s a bigger story that needs to be told that’s also more accessible.”