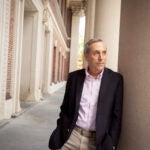 Over the more than 15 years that Jeffrey Wilson has taught Shakespeare, students have shown various levels of interest in the Bard. But Wilson has come to see the most potential in the students least impressed by the playwright — the ones who remind him of his younger self.

“The skeptical students are often the most successful ones. They’re not writing the essays their Shakespeare prof wants to read. They’re writing what they really believe about this 400-year-old Englishman’s weird prominence in modern life,” said Wilson, who this fall marks his ninth year teaching “Why Shakespeare?” to first-years in the Harvard College Writing Program.

Wilson, whose path through academia started in community college, asks students to find “the aspects of your life, the circumstances of this moment, that you will choose to engage with these stories, and to debate the merits of each of them.”

“There are so many things these students bring to these essays that the Shakespeare industry doesn’t have yet,” he said. “If they are thinking about going into medicine, they might think about the way Shakespeare wrote about disease. Or so many students have found roundabout ways to connect with their cultural heritages through Shakespeare. They draw upon that knowledge just by living their lives and the whole point I say to them is:  If you can do that, then you suddenly shift from a student who’s trying to convince a teacher you understand some material to being an expert who can teach other people things they don’t know. As soon as they get license to do it, then they’re off.”

One student who grew up in a single-parent household wrote a defense of Polonius (chief counsel to the king in “Hamlet”). The student reflected on Polonius — typically portrayed simply as a buffoon — as a widower and working dad doing his best to raise two teenagers. Another essay argued that “Hamlet,” famous for mixing comedy with tragedy, isn’t actually funny. “As a black woman in the 21st century, she found no real reason for wanting to engage with the celebrated artwork, and that’s a dynamic worth writing about,” Wilson said.

Wilson identifies with those students who side-eye the Bard. A self-described “middle-of-the-road high school student” in Salina, Kansas, who never read a Shakespeare play until senior year in college, battled alcoholism as a teen, and attempted suicide in high school — Wilson says he didn’t fully process those experiences until writing about them in his own “Hamlet” essays in 2020 and 2021.

“I didn’t get into any universities, but I knew I needed to get out of Kansas so I enrolled at Mesa Community College in San Diego,” he recalled. “Tuition was $161 per semester.”

He got an F on his first writing assignment.

“In my second semester at Mesa, we read John Milton’s ‘Samson Agonistes,’” a play about the biblical strongman who tore down his enemy’s temple from inside. “That was six months before 9/11, so early-modern literature became one of my lenses for that modern event,” Wilson said, nodding to the approach he took in his books “Shakespeare and Trump” and “Shakespeare and Game of Thrones.”

On the weekends, Wilson worked as a hip hop DJ  — “my students don’t believe me when I tell them” — and planned for a career as a recording engineer. But he reconsidered after a bad experience interning in the music industry after he had transferred to San Diego State.

“The next semester I had a really good experience in a Milton course. I loved thinking about the big, ethical, political, theological questions, and it was the first time anyone told me, ‘You’re a good writer,’” he said. “I try to remember to say that to good writers now — ‘You are really skilled at this. You have some real talent’ — because I had no idea at the time.”

He was accepted by the University of California at Irvine for graduate school, a moment etched in his mind thanks to his undergraduate mentor and English and Comparative Literature professor Peter Herman.

“I knocked on his office door, told him I got into grad school. He shouts out ‘Yes!’ at the top of his lungs. And I say it’s fully funded, and he shouts an even louder ‘YES!’ Teachers are coming out of their classes, giving him dirty looks, but I’ll never forget it. I had never had someone in academia who cared about what I was doing or was invested in me. Seeing a teacher bring real enthusiasm to what a student was doing — that guides everything I try to bring to my classes now,” Wilson said.

Drawn to the big ideas and many interpretations of Shakespeare, Wilson thought only about the Bard in academic terms — “reading these things by candlelight in the seriousness of my study” — until his girlfriend (now wife) Allison Dolan invited him to see Shakespeare on stage.

“She’s a musical theater person, and for our third date, she gave me a choice: ‘Much Ado About Nothing’ or ‘Macbeth’ at the Old Globe in San Diego?” he recalled. “I chose ‘Macbeth,’ the worst idea for a date ever. But what fascinated me was the conversations people were having during the intermission. People out in the lobby in sunny San Diego debating these big questions of tyranny and madness. That, to me, is where the value of Shakespeare resides — not in the glory of his words, but in the conversations his plays spark that otherwise wouldn’t happen between two people.”

In his first job after graduate school, he incorporated that belief in his syllabus for writing classes he taught to criminal justice students at California State University Long Beach.

“I was teaching APA Style, subject-verb agreement, and how to write with evidence, but then I heard these future cops and lawyers in the classroom saying all these outrageous things like: ‘A woman isn’t as good a police officer because a man is stronger’ and ‘You can tell a criminal by looking at him.’ We threw out our syllabus and read ‘Hamlet.’ If you can understand how crime and justice work in ‘Hamlet,’ you’ll be closer to understanding them out on the street,” he said.

“In academia, there are still so many things that I don’t know how to do, like writing grant applications,” he said. “I don’t come from this world, and no one really teaches you how to do it.”

Teaching at Harvard from a community college background, Wilson said his earliest roots remind him to write beyond academia.

“I want to write scholarship for the people I grew up with. I came up in the ’80s, seeing public education in Kansas get systematically defunded over 20 years. In eighth grade, students walked out of school down Main Street to city hall to protest that they weren’t giving teachers enough funding to get class supplies. And now you look around Kansas and see the effects. Forty years of defunding public education has cultural consequences. That’s all the inspiration behind Public Shakespeare.

“Seeing my mother volunteer her whole life in our small town art center showed me how art can play a role in community building. From my father I learned to be nice to people,” Wilson added. “Niceness is underestimated in academia. I was so professionalized to write scholarship that finds fault with people. There is real value in scholarship that celebrates people and the world.”