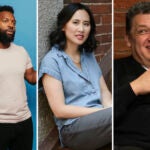 President John F. Kennedy’s Harvard letter sweater sold at auction earlier this year for more than $85,000. To the current students who received theirs on Wednesday after earning a “Major H” for excellence in varsity athletics, their own small piece of Harvard and intercollegiate sports history feels just as treasured, if possibly not quite as collectible.

“There are a lot of great people who came before us,” said Kaedyn Odermann ’24, a member of the football team and Lowell House resident. “To be stepping in the same building and wearing a similar sweater that they wore, it really means a lot.”

The tradition of a varsity letter sweater was born at Harvard in the 1880s in the earliest days of intercollegiate athletics. Originally each sport had a unique sweater — featuring different color combinations of crimson, black, and white. Since 1957, every letter winner on Harvard’s 42 varsity teams has received the same black pullover with a white-bordered crimson H, the hockey team’s original color scheme. In 2009, the Harvard Varsity Club partnered with Polo Ralph Lauren to create a specially-designed sweater, and in 2015 Susan Thabit and Cory Thabit ’90 generously endowed the Lettersweater program.

“We like to say that the Varsity Club ‘founding fathers’ invented the letter sweater, and we’ve perfected it,” said Bob Glatz ’88, the Broadbent Family Executive Director of the varsity club.

One recent innovation was interrupted last year. Having issued letter sweaters for decades, varsity club staff resurrected a past tradition in 2019 — selecting a day when “Major H” recipients would receive them at a celebratory reception each year. Little did they know that the COVID-19 pandemic would again halt the annual event as Ivy League competition was canceled in 2020‒21.

But this year the festivities resumed. Nearly 200 student-athletes enthusiastically received a sweater on the patio of Dillon Fieldhouse. Criteria for earning a letter is different for each team, but the prized black sweater is the same.

After 18 extraordinary months apart, letter winners of 2021 may have savored the experience just a little bit more than recent past recipients.

“It feels surreal [to be back on campus] … I didn’t know if this moment would occur or happen,” said DaLoria Boone ’22, an Adams House resident who competes on the women’s track and field team. “I earned [my sweater] when I was a freshman, and now I’m a senior. … Today was super exciting — I wrote it in my calendar … I was going to be here before practice early so I can get my sweater!”