Should we be worried about Amazon, Apple, Facebook, and Google? 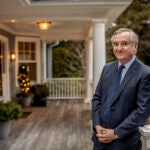 A flurry of activity in Washington, D.C., has turned a spotlight on the arcane world of antitrust enforcement.

This summer, Congress introduced a clutch of antitrust bills that both proponents and critics say could lead to the breakup of technology giants such as Amazon, Apple, Facebook, and Google. The measures seek to curb the control these companies have over online commerce, software distribution, social networking, and internet search. The U.S. Department of Justice Antitrust Division, the Federal Trade Commission, state attorneys general, and private parties have brought antitrust lawsuits against these companies that are pending.

Nancy L. Rose ’80 is a professor of applied economics at the Massachusetts Institute of Technology and head of MIT’s economics department from 2017-20. She served in the DOJ Antitrust Division from 2014-16. Currently the Matina S. Horner Distinguished Visiting Professor fellow at the Radcliffe Institute, Rose explains the conditions behind the sudden attention on antitrust issues. Interview has been edited and condensed for clarity and length.

ROSE: The U.S. antitrust system is designed to prevent the accumulation or exercise of market power through unfair competitive means. There are three main issues the system focuses on.

The first, and most intensive use of government enforcement resources, involves mergers. If two firms want to combine to lower prices or to improve consumer experiences, the U.S. antitrust system does not impede that type of merger or acquisition activity. However, if firms are trying to buy competitors, antitrust law is intended to protect competition by blocking those acquisitions. Similarly, if a firm tries to acquire a supplier or customer and by doing so is likely to exclude competitors from that supplier or customer or raise their costs of doing business, then antitrust enforcers intervene. You’re not allowed to buy market power.

Second, the system admonishes behavior by firms with significant market power that aims to exclude or disadvantage rivals. The monopolization cases that have been in the news recently — the Google cases, the Facebook case refiled by the FTC — are examples of this. Attempts to monopolize and monopolization are banned by the antitrust laws, and, as these cases illustrate, can be enforced by lawsuits brought by the government or by private individuals or firms.

Third, it bans firms acting together as if they were a monopolist. We describe this as collusion or cartel behavior. Some recent cases include DOJ prosecution of drug manufacturers alleged to have colluded to raise the price of generic pharmaceuticals, and cases filed against employers alleged to have colluded to reduce competition for workers through wage-fixing or “no poach” agreements not to hire each other’s employees. Antitrust laws protect competition for suppliers and workers, not only for customers.

One thing that makes the U.S. somewhat different from many countries is that our antitrust enforcement is mediated by federal courts and defined by case law. Over the past 40 years, we’ve seen a narrowing by courts of what is defined as harmful or anticompetitive behavior and an increase in the standards of proof that plaintiffs, including the government, must meet to prove conduct is anti-competitive. At the same time, the combined budgets of the DOJ Antitrust Division and the FTC, which share responsibility for enforcement, have stagnated or declined in real terms, which has put further pressure on their ability to protect competition.

GAZETTE: How much funding is necessary to fully enforce what’s going on today?

ROSE: The combined antitrust budget of the DOJ and the FTC is less than $600 million, and that includes considerable resources for the FTC’s consumer protection mission, which is independent of antitrust. That’s to protect competition in an economy of over $22 trillion in GDP! President Biden has proposed an increase in the budget for both the FTC and the DOJ Antitrust Division on the order of 10%-11% for the coming fiscal year. A group of economists and lawyers, including former enforcers that I worked with last fall, recommended to the Biden transition an increase of $600 million for the two agencies to hire more staff, to increase staff compensation, and add data scientists and those with expertise in the digital platform tech space. There has been a lot of change in the global economy and agency expertise has lagged.

GAZETTE: Many are closely watching the antitrust cases involving Facebook, Google, and other tech giants for a variety of business reasons. Will any of those decisions influence what happens in other industries?

ROSE: Absolutely. The antitrust system is based on deterrence. Companies across the economy will be watching to see what courts view as acceptable behavior. If the tech cases are successful, the opinions that come out of the litigation are likely to affect not only the tech sector but also other industries and markets. If those cases don’t succeed, that could have a dramatic adverse effect on the economy by empowering companies to exclude rivals and disadvantage their competitors and reduce competition. So, I think the outcome either way will be quite important.

GAZETTE: What does inadequate enforcement cost consumers, and what is the cost to job and wage markets, to the cities and states where these firms operate, and to the nation’s productivity and competitiveness as a whole?

ROSE: We know from industry- or sector-specific studies that the cost of anti-competitive behavior can be large. But as much as we’d like to be able to say, “This is what it costs the U.S. economy,” I haven’t seen an economy-wide figure that we have much reason to be confident in. Even if we could quantify the price impact, and in some settings we can — there are merger retrospective analyses — many of the costs of reduced competition are often difficult to quantify. Innovation drives so much of our increased living standard: activities that produce new products, new services, or that reduce the cost of producing existing products and services. But innovation benefits turn out to be exceptionally difficult to measure, and even harder to associate with changes in competition.

GAZETTE: What can economists contribute to improve this issue?

ROSE: There’s a lot we could contribute. On the theory side, these include trying to better understand the consequences of certain types of agreements or certain types of behaviors and the circumstances under which mergers are more likely to be problematic. On the empirical side, my field of industrial organization has paid too little attention to foundational work necessary to advance policy. Take, for example, mergers: Firms proposing to merge often defend their actions by promising substantial efficiencies from combining their operations. But there has been too little research devoted to understanding whether such claims are, in general, validated. The first project during my Radcliffe Institute fellowship will be cataloging what the economic evidence reveals about the magnitude and prevalence of merger efficiencies. This is a critical input to police. If we’re not going to give up anything by barring mergers because efficiencies aren’t likely to be realized, then we should be much more assertive about our enforcement boundaries, and be much less worried about making a mistake and blocking a merger that isn’t anti-competitive because it wasn’t particularly beneficial either.

Vertical mergers, such as those between firms along a supply chain, have been understudied, and most likely, underenforced. The case law is too lenient; decisions have too frequently been based on misunderstanding the economics. This is another area where economists have a lot more to contribute. In monopolization and anti-competitive conduct, we need more research on what types of exclusionary behavior are especially problematic and what other types of behavior harm competition as opposed to improve the operation of markets.