Not just what was said, but who got to say it 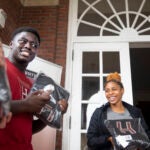 The famous line attributed to Mark Twain “write what you know” became “teach what you know” for Drew Faust as she prepared to head back to the classroom in 2019 after essentially a nearly two-decade break from teaching.

And one thing the president emerita knows is how to address a crowd.

“When I thought about what I had been doing during my time as the dean of Radcliffe and as the president of Harvard that might have some relevance to students, I thought about writing speeches, giving speeches, thinking about speeches,” said Faust, the Arthur Kingsley Porter University Professor. “And I decided that would be fun to focus on.”

So the Civil War expert blended her love of history with her love of language to create the undergraduate seminar “American Speeches: The Power of Words,” a close look at how key addresses in American history function both as “windows into their own era” and words to “inform and persuade.”

September marks the third time Faust has taught the small class, part of the College’s History and Literature concentration. As in the past, this year’s lineup features some of the most renowned orations in history, such as Martin Luther King Jr.’s 1963 “I Have a Dream” speech from the March on Washington and Abraham’s Lincoln’s Gettysburg Address, delivered 100 years earlier during the dedication of a national cemetery at the site of a bloody three-day battle that marked a turning point in the Civil War. But there are lesser-known works as well, including the spoken words of pioneers Elizabeth Cady Stanton, Sojourner Truth, and Frederick Douglass, each shining a light on an important moment in the nation’s past and emphasizing one of the course’s key questions: Who gets to speak?

“For much of time, it was not seen as appropriate for women to be orators,” said Faust. “Frederick Douglass wasn’t supposed to be a speaker either. He was supposed to be an enslaved worker. So, we look closely at claiming one’s voice as a part of speech giving.”

Addresses drawn from antiquity, Shakespeare, and the films “Patton” and “Malcolm X” fill out the syllabus and help students appreciate what Faust sees as the keys to every great speech. “They make a connection between the speaker and the audience that is in the mind and in the heart,” she said, “and they have a trajectory.”

“It was really interesting to see the way that speeches can offer comfort and offer condolence but still have a message that is something beyond the despair.”
— Ellie Loigman ’21

Creating that connection was central to Faust’s Baccalaureate remarks to graduating seniors each spring, an annual task she particularly valued in her time as Harvard president. “At that moment, approximately 1,600 extraordinary individuals were sitting in front of me. There could have been a future president, or a future Nobel laureate, or someone who was going to set the world on fire in one way or another in the audience, and I got 20 minutes of their time to tell them something that mattered.”

Elijah “EJayy” DeVaughn Jr. took the class when it debuted in the fall of 2019. On a call from California, the history and literature concentrator who graduated in spring remembered Faust as “incredibly warm,” and said her class taught him how rhetoric has shaped American history, and possibility. “I think this was really a point that she wanted to drive home … rhetoric is our first tool in the work of creating what ought to be.”

Like all good teachers, Faust works to keep things fresh, and her students engaged. This semester, former presidential speechwriters David Gergen and Stephen Krupin from Harvard Kennedy School will drop by the class to discuss their work, and Diane Paulus, American Repertory Theater’s artistic director, will help coach students on how to deliver their own speeches — the final class assignment. Faust also changes up the syllabus each year, incorporating talks recommended by others and those that touch on current events. Last fall, as the death toll from COVID-19 rose, Faust added a section on condolence addresses to explore how leaders deal with hardship and grief.

For Ellie Loigman, studying the remarks delivered by Robert Kennedy hours after the assassination of Martin Luther King Jr. struck a chord. “It was really interesting to see the way that speeches can offer comfort and offer condolence but still have a message that is something beyond the despair,” said Loigman, a history and literature concentrator who graduated this year and works as a paralegal in Washington, D.C. Loigman also said that studying “critical junctures in American history” in Faust’s class helped inspire her to pursue a legal path focused on “gender legislation and equal rights.”

“As an aspiring civil rights litigator, knowing how to present, knowing how to speak, knowing how to tell a story is critical, and I think fundamentally that’s what the class was — reading about and dissecting how people told stories over the course of history, and in doing so learning how to do that ourselves,” said DeVaughn, a Rhodes Scholar who plans to attend Yale Law School. “That’s something I hope to be doing for the duration of my life.”

For Faust, being back in the classroom has brought its own rewards.

“I feel so blessed to have had an opportunity, after my time in Mass Hall, to be with students,” said Faust, “and to learn from them.”