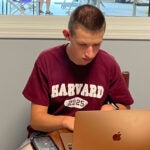 A summer of service for first-years

Sophomores, juniors, and seniors find their way on Move-in Day

The first sophomores, juniors, and seniors moved into Harvard’s Houses on Friday, a welcome return to the familiar and the newly different. Some students who had taken a leave for a semester or two arrived with a change of graduation year; others who had learned virtually last year were overjoyed to see new friends in person. All were excited to be back among their peers and College routines.

“I’m Class of ’23, but social Class of ’22,” said Luke Williams, now a junior after taking the last year off to work in government in Oklahoma, his home state.

“I had finally solidified a friend group,” he said, of his reason to take a leave. “I didn’t want to lose the in-person aspect of College.”

Claire Orrange was also returning to campus after a yearlong absence, during which the history and literature concentrator did some traveling, adopted a pandemic cat named Blossom, and played a lot of the board game Trouble with their family.

“I’m excited to be back. I ran into a friend on my way here. They had this shock of pink hair I could identify from afar,” said Orrange, unloading their car on the front steps of Currier. “It’s the people that are the difference.”

A steady stream of students arrived throughout the day. Around the Quad, mylar “Pfoho” balloons greeted students at their front door, and Cabot students were given leather ID holders and copies of the House directory.

Janna Ramadan ’23 described Move-in Day “like I’m starting over.” The 21-year-old government and modern Middle East studies concentrator had yet to step inside Currier, the House she was sorted into during her second semester as a first-year nearly 18 months ago.

“I’m excited and a little nervous because I don’t know what changes to expect from Harvard post-pandemic,” said the East Boston resident.

Inside Currier, Williams spent the morning with his dad, Tyler, unboxing a Fridgemaster, setting up a futon, and unpacking suitcases.

“It almost feels like it’s the first time arriving,” he said. “But I have something to come to.”