Serving up conviviality — and rocket spikes 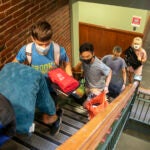 For 40 years, the Rhino League has been played on the Harvard Bio Labs volleyball court

Dave Matthews slams a rocket of a serve. Across the net, a defender pops it to a teammate for a quick set-up, and a tall researcher in sunglasses at the net arches up and spikes. The ball sizzles past the outstretched arms of Kumaresh Krishnan. Rachel Savage and Matthews, both grad students, dive for it. Savage digs it up, puts it over, and the guy in sunglasses goes up to put it away, but smashes it into the net. Point Aquatic Army.

Most Rhino League games are not this tough. They typically feature a distinctive blend of community, competition, and lightly lubricated conviviality, but this one on Aug. 20 between Aquatic Army and Fourth-Floor Giants was for the championship. Its conclusion would mark another season of summer volleyball for teams of mostly Harvard scientists, competing weekly on a sand-filled court under the gaze of a pair of bronze rhino statues, from which the group takes its name, standing guard before the Harvard Bio Labs.

“It started off as every lab playing just forming a team within their labs and then coming and participating, but it’s kind of transcended that and become like an actual competition,” said Krishnan, league co-commissioner and a graduate student from the Engert Lab in the Department of Molecular and Cellular Biology. “It’s really come a long way.”

At the end of the season, top teams enter playoffs to compete for the Rhino Cup, a homemade trophy that shows the animal standing on a lab cylinder while balancing a volleyball on its horn. Some years, the worst teams from the league play for the Dung Cup, a plaque topped with what looks like a pile of rhino — you get the picture.

The league has two divisions, one more competitive and the other recreational. Whatever division league members play in, the spirit of the league holds strong.

“The whole idea has been that it’s a community-building exercise,” Krishnan said. “Over the summer, it’s a nice way for all of us to hang out, socialize, and also have some fun in the process.”

This year has been no different, with 39 teams and more than 250 participants.

The league is widely believed to have been started in the 1980s by Richard Losick, Maria Moors Cabot Professor of Biology. (It seems that none of the league elders have a precise memory of how it all got started but pretty much all, including Losick, believe he was probably the one who got the volleyball rolling.) Some teams are made up of members of a single lab or department, while others are a hodgepodge of different groups and people.

The league is open to all Harvard ID holders, but most players come from the nearby science labs. Past participants can join even if they don’t have an active Harvard ID.

Games are played rain or shine. During a torrential storm last week, Aug 19 Venkatesh Murthy, Raymond Leo Erikson Life Sciences Professor of Molecular and Cellular Biology, tweeted a photo of competition continuing in inches of water. Only thunder can stop a Rhino game.

At the final day of competition, more than 100 people from Harvard’s Cambridge-based scientific community gathered. Despite the mugginess, folks played with their dogs on the sidelines, sharing laughs over slices of pizza, bottles of hard cider and beer, and, of course, the game itself.

Krishnan’s Aquatic Army defeated the Fourth-Floor Giants, a sort of super-team put together from various labs, to take the Rhino Cup. As the Aquatic Army relished their victory, the bronze rhinos looked on approvingly, already eager for the next season to begin.

“It’s always fun to win of course,” Matthews said. “But I think it was even better to win with this team. We got along really well on and off the court, and everything felt like it really came together for us to put on a great game in the finals. It was very much worth all the matches under a sweltering sun and even those in the pouring rain.”