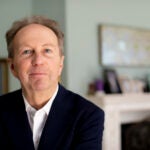 Remembrance of cicada seasons past

He is best known for his sweeping, vibrant murals depicting the Black experience, but Louis Delsarte’s smaller works are equally evocative, and one of them will soon be on view at the Harvard Art Museums.

In 2018, Harvard acquired “Unity,” an offset lithograph print by Delsarte, completed in 1995 during his residency at the Brandywine Workshop and Archives in Philadelphia. The piece will be featured in an upcoming museums’ exhibition that spans more than three centuries of printmaking, and it was the focus of a recent talk in which Ph.D. candidate Kéla Jackson explored music, color, and interiority in Delsarte’s work.

Delsarte died of a heart condition last year at age 75, a loss that devastated “not only the Atlanta art scene [where he was an assistant professor at Morehouse College], but also a larger community of African American artists,” said Jackson, a student in Harvard’s Department of the History of Art and Architecture. Born in Brooklyn in 1944, Delsarte grew up in a community of “artists, musicians, and writers carrying on the legacy of the Harlem Renaissance,” said Jackson, and devoted much of his career to documenting “the many textures of African American life, weaving tragedy, hope, loss, and love into scenes of the everyday. His explorations pulled images of African American life from the margins and posited them as universal.”

That universality is central to “Unity,” which depicts an intimate family scene involving a mother, father, and three young children gathered in a sitting or living room. The piece is filled with motion because of the way Delsarte manipulated color on the woven page, said Jackson. The artist used 12 sheets of Mylar, a thin polyester film coated with different hues, to add depth and shading to the work. Those thin films would then have been transferred onto metal plates, then to an intermediate surface, and finally to print media, each color printed on top of another in succession.

“In terms of aesthetics, movement happens, as the intricate layers cause oscillating effects … and through each layer of Mylar, which is almost a conversation that happens between master printers and artists, they’re layering and seeing the way the colors come together,” said Jackson.

“The movement that Delsarte creates in his composition,” she added, “emphasizes the process and play within printmaking that makes this work so compelling.”

“Unity” will be displayed as part of “States of Play: Prints from Rembrandt to Delsarte,” on view from September 4 through January 2. The show will feature prints from the museums’ collections that highlight the creative decision-making and iterative nature of the printmaking process. Both “Unity” and Delsarte’s 12 Mylar separations will make their Harvard debut in the show.

It seems fitting that a boy who listened to his father’s jazz records would as a man embrace improvisation in his own art. Delsarte and his printer crafted “Unity” by “riffing off one another,” said Jackson. “Spontaneity in the offset printmaking process allows for artists and printer to really converse, and we can see these conversations coming through and the layers of colors … but also the process becomes almost lyrical, each Mylar existing as a note within a greater melody.”