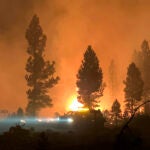 It is just 1.8 miles from Harvard’s Science Center in Cambridge to the new Science and Engineering Complex in Allston. The trip, from the Oxford Street building through Harvard Square and down North Harvard Street, should take about 10 minutes by car — about half an hour if you walk.

So taking a year is bad, even considering Boston-area traffic. But there is a legitimate excuse for why it took so long to get the Harvard IBM Mark I Automatic Calculator — a computing milestone described in 1950 by Time magazine as “a progenitrix, a sort of mechanical Eve” — to its new home: the COVID-19 pandemic.

Among the world’s first programmable computers, the Mark I — originally the Automatic Sequence Controlled Calculator — represented a key step forward in the global digital evolution. Before it began operation in 1944, computing machines (some of them faster than the Mark I) each had to be designed to solve a specific problem, The Mark I, however, could use punched cards and punched paper tape to store data and instructions that could address an array of problems.

“It was such a first for its time,” said Sara Schechner, the David P. Wheatland Curator of Harvard’s Collection of Historical Scientific Instruments, which counts the machine among its most treasured holdings. “We have lots of very significant items, but it ranks up there as a special thing.”

It’s also the collection’s largest item. The original Mark I weighed five tons and was 50 feet long. It was the brainchild of a Harvard graduate student, Howard Aiken, who designed it in 1937, building on decades-old inspiration from British engineer and inventor Charles Babbage. Aiken shopped the idea around until IBM took interest. The machine itself, developed in collaboration with company scientists, was delivered to Harvard’s Cruft Lab in 1944, in time to lend a hand in the nation’s World War II effort, including the development of the atom bomb, missile trajectories, and the design of radar facilities. 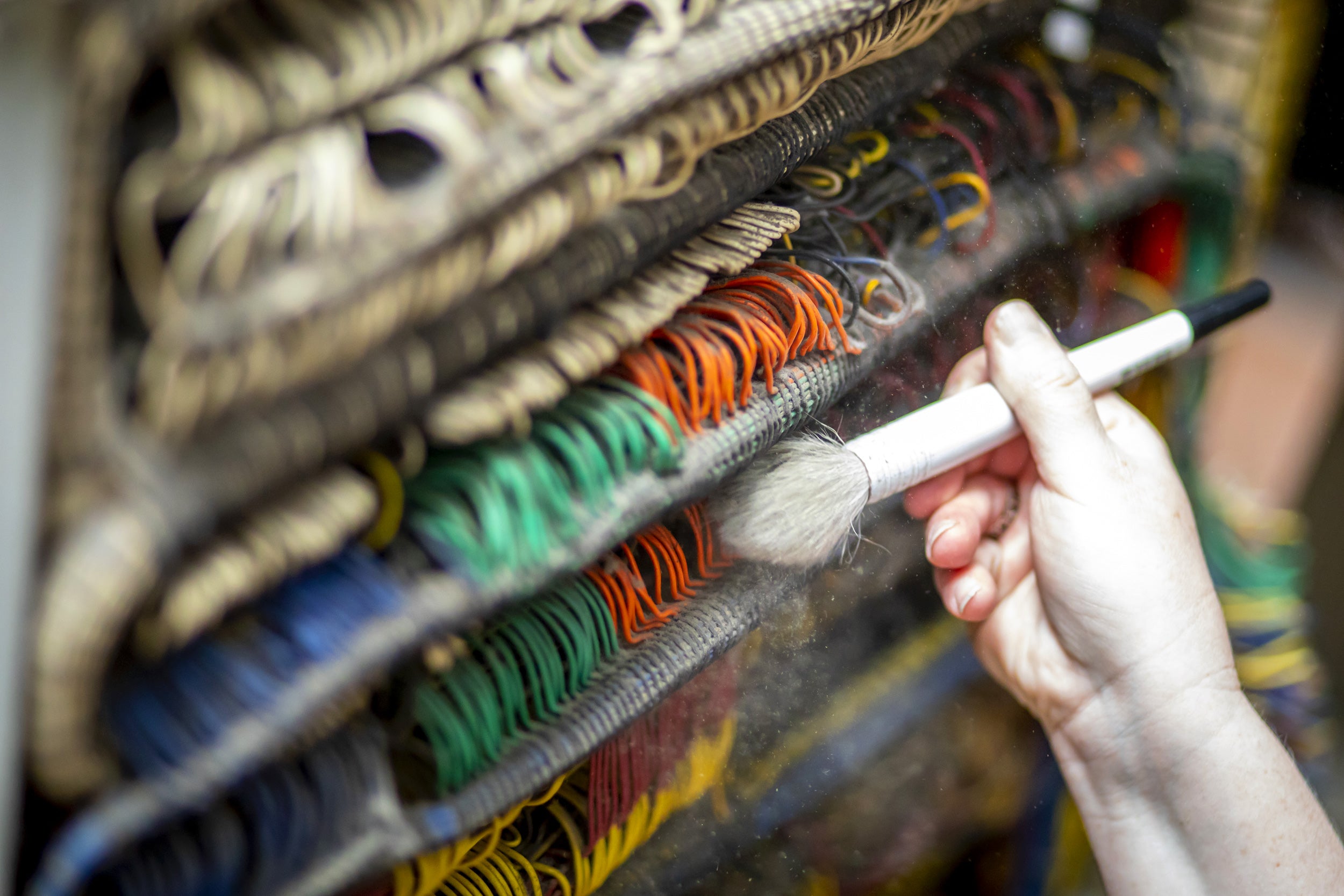 Manager of the Collection of Scientific Instruments Sara Frankel removes years of dust from the Mark 1’s interior mechanism. Conceived by Harvard physics professor Howard Aiken, and designed and built by IBM, the Harvard Mark 1 is a room-sized, relay-based calculator. 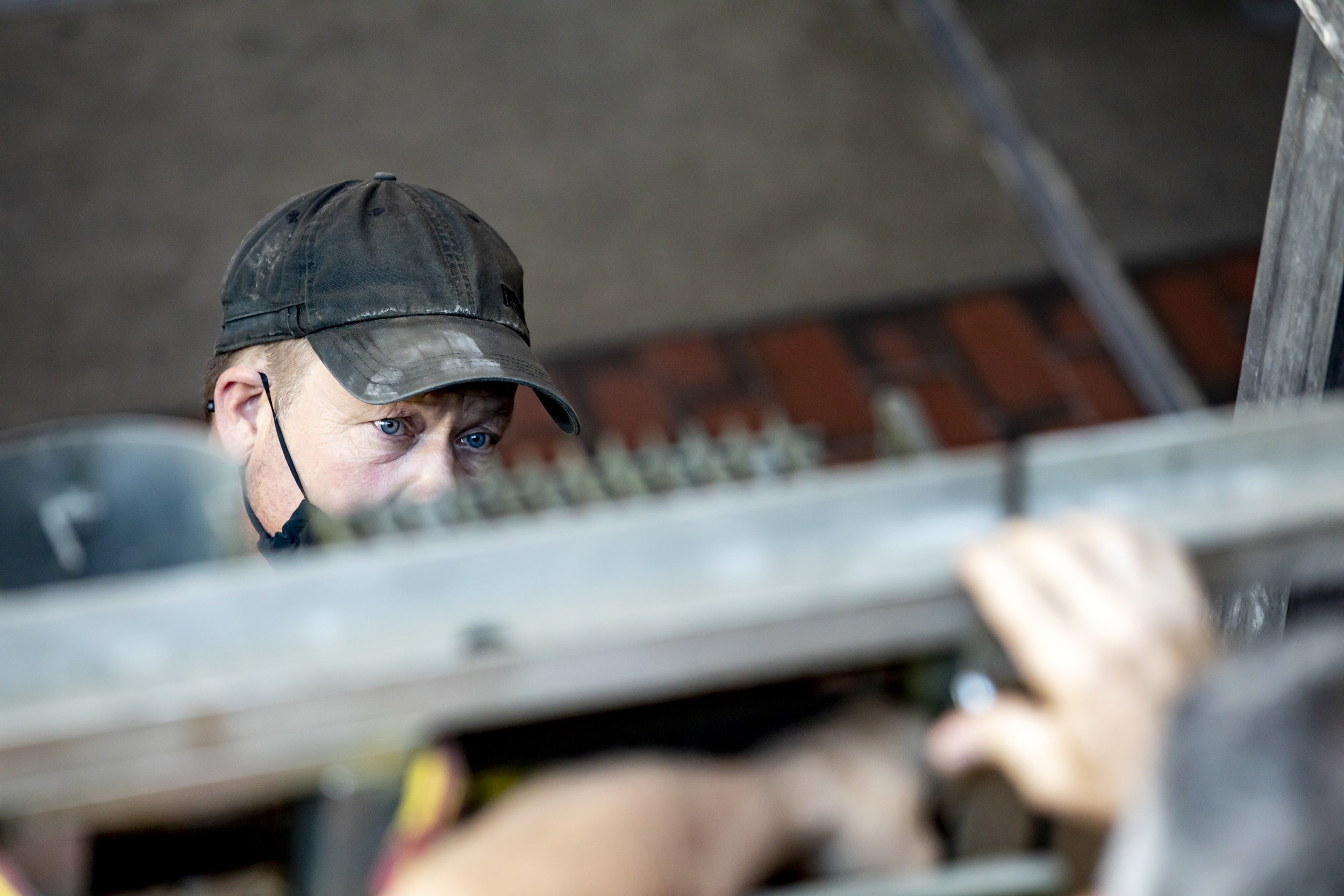 Foreman Mike Smith of O.B. Hill Trucking and Rigging works onsite. There are 750,000 components in the Mark 1. 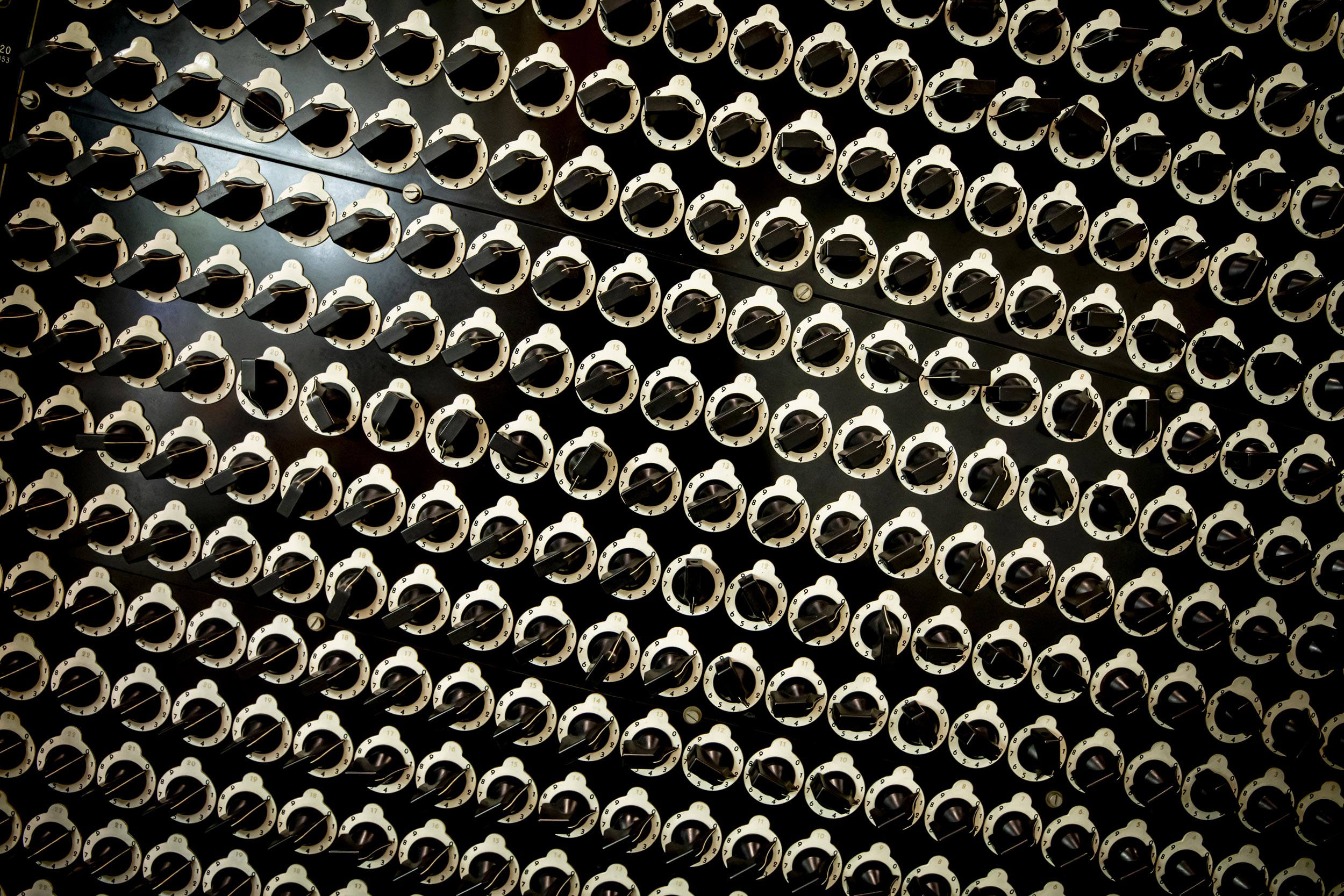 The constant registers are key parts to the IBM Automatic Sequence Controlled Calculator (ASCC), referred to at Harvard as the Mark 1. 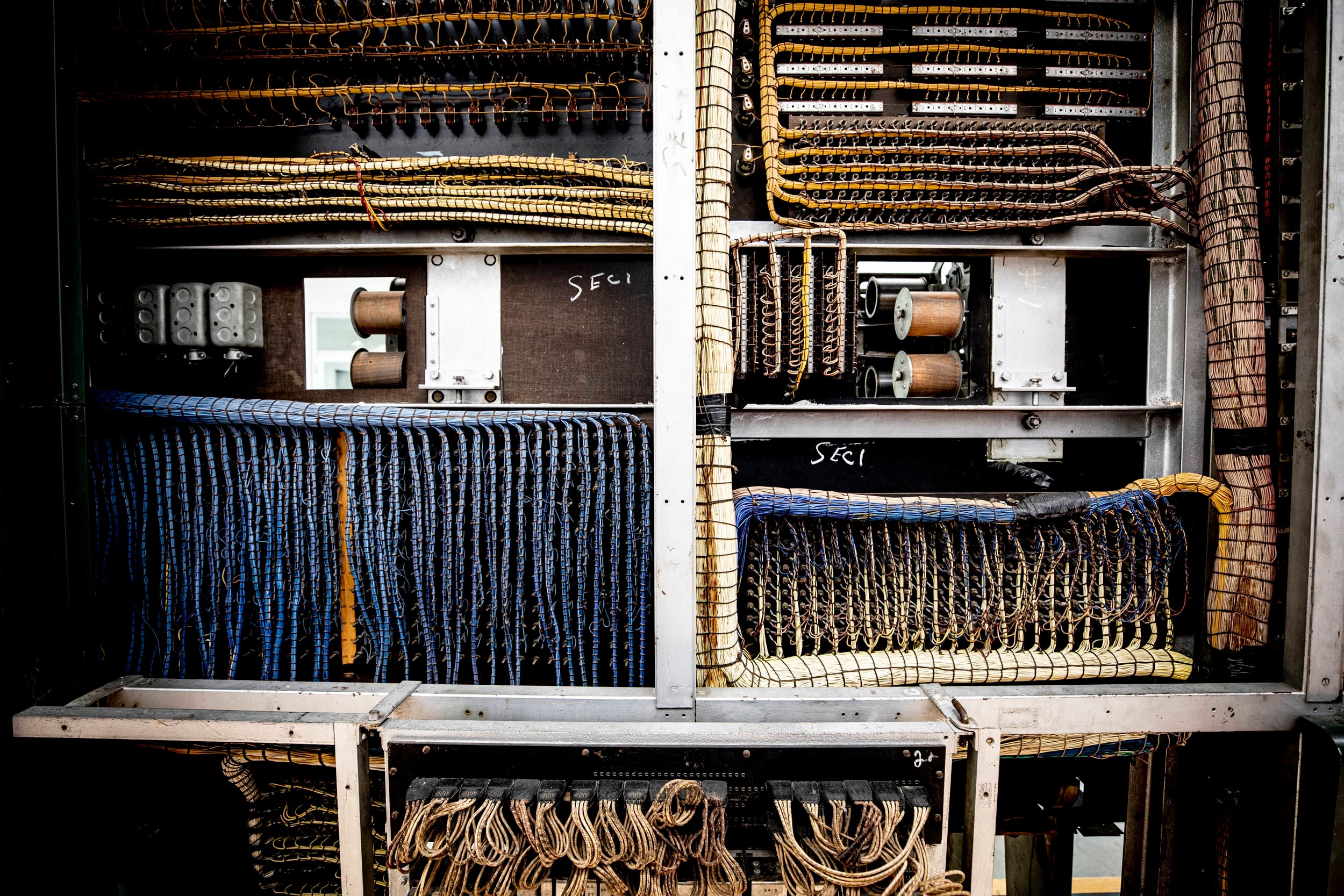 The constant registers are key parts to the IBM Automatic Sequence Controlled Calculator, which was dubbed the Mark 1 after it was brought to Harvard. 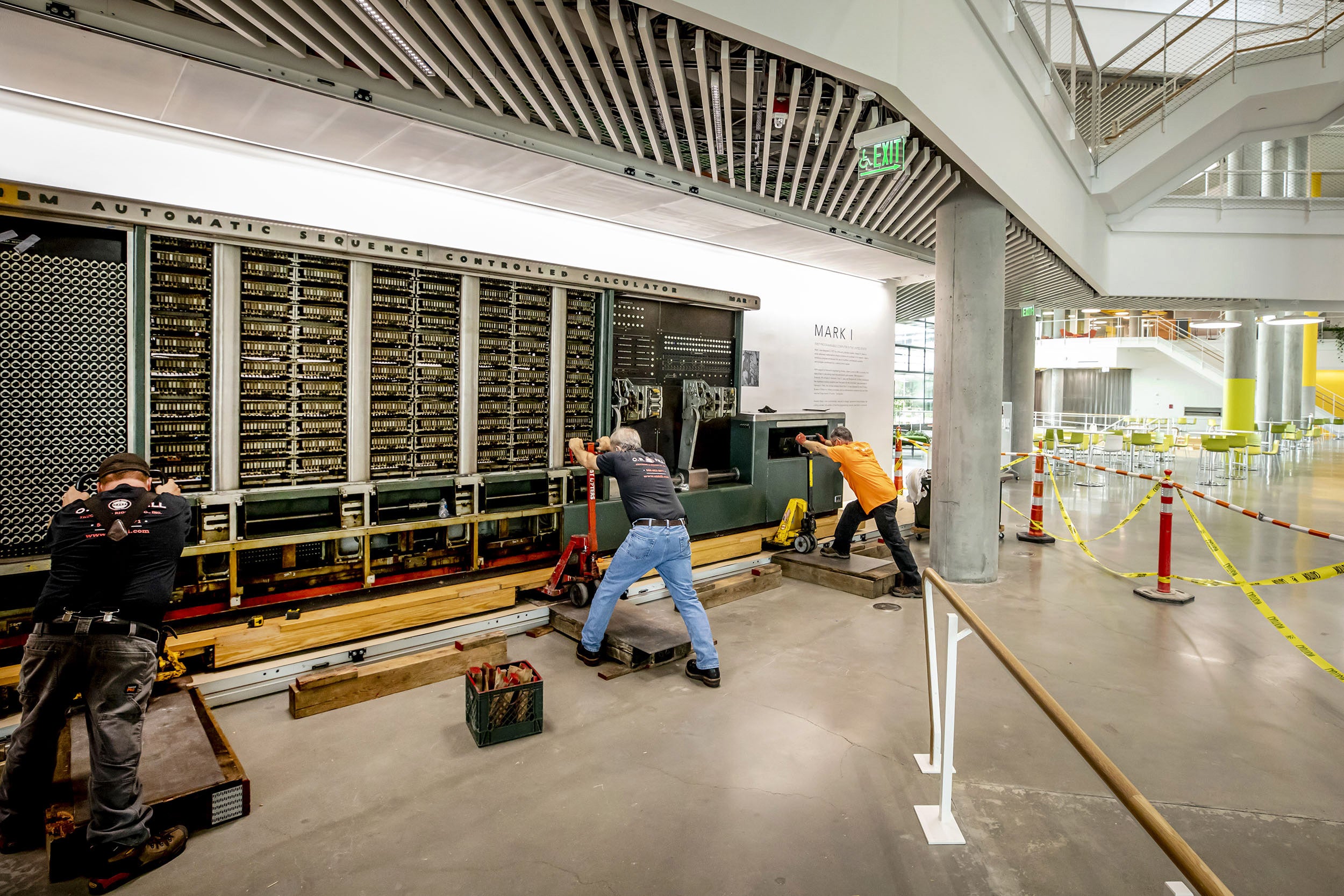 Foreman Mike Smith (left), Don Knight, and Larry Hall use pallet jacks to push the Mark 1 into its new space at SEC.

The project was run by the U.S. Navy and overseen by a crew headed by Aiken, who had enlisted and served as the project’s commander. Among those who played key roles was Lt. Grace Hopper, a mathematician. Hopper, who would rise to the rank of rear admiral, played a key role as an early Mark I programmer — making her one of the world’s first. She compiled a book on how to program the machine, which became the world’s first such computer manual, Schechner said.

Hopper’s notes provide important documentation of those days, whose echoes can be heard today in now-familiar terms used routinely in talking about computers, Schechner said. A repeating “loop” for the Mark I was an actual loop of punched paper instructions that fed into the machine continuously. A software “patch” for the Mark I referred to the paper patches applied over erroneously punched holes on a program tape or card. Once patched, it could be repunched with the correct instruction. The Mark I’s “library” was where all the punched paper tapes and cards that held the Mark I’s programming instructions were stored. And, though the term “bug” was already in use for hard-to-find mechanical problems, the Mark I saw it applied to computers, Schechner said. Hopper’s notebook contains a tongue-in-cheek reference to the term, an actual moth that was the cause of a malfunction in the next generation machine, the Mark II. Hopper taped the dead insect to the page, noting that the mythical “bug” had been observed at last.

With a computation speed of 3 hertz — today machines run at a relative breakneck pace of billions of hertz — the electro-mechanical Mark I was driven by a physical driveshaft connected to its clattering mechanical relays and was actually slower (in some cases a lot slower) than other computing machines of its time, some of which used less reliable but faster vacuum tubes. But the Mark I was built using proven, off-the-shelf business components from IBM wherever possible and was more accurate and reliable. Those qualities were valued, and the machine would continue to churn out answers until 1959 despite the development of newer, faster versions, including the Mark II, III, and IV, also developed by Aiken at Harvard. After its retirement, the machine was dismantled, with roughly half remaining at Harvard and two other pieces going to IBM and the Smithsonian Institution.

The machine’s new home, the Science and Engineering Complex, will house labs and classrooms for the Harvard John A. Paulson School of Engineering and Applied Sciences (SEAS), where Harvard’s computer science programs reside. The long-anticipated move of offices and labs for about half the School’s faculty into the new building was about to shift into high gear when the pandemic struck, putting on hold both the move and finishing work on the building. The move-in resumed last fall and School officials expect the SEC to be fully operational in September when students return to campus. The Mark I relocation was planned and carried out by teams from the Collection of Historical Scientific Instruments and SEAS, led by SEAS Assistant Dean for Campus Planning Pamela Choi Redfern and organized by the project’s senior manager, Michael Noll, Schechner said.

“There’s a kind of beauty to it. There’s so much wiring and soldering, so many connections bundled and almost knit.”
— Sara Schechner, David P. Wheatland Curator of Harvard’s Collection of Historical Scientific Instruments

“It is gratifying to have this groundbreaking machine that links back to the dawn of the computer age ensconced in the new home of Harvard’s burgeoning computer science programs,” said SEAS Dean Francis J. Doyle III. “Surrounded by cutting-edge research — from artificial intelligence and machine learning to quantum devices and networks — the Mark I will be on public display to educate and inspire future generations of engineers and scientists.”

Even at half its original size, Schechner said the Mark I is not only the largest item in the Collection of Historical Scientific Instruments, it is also the largest thing whose move she’d ever overseen. The Mark I had been in Harvard’s Science Center since the 1990s, when its home in what was then the Aiken Computation Laboratory was demolished to make room for the Maxwell-Dworkin Lab. In preparation for the current operation, Schechner said they examined photographs of that earlier move, seeking clues about the best way to dismantle and transport the massive machine. The move to Allston and the SEC had been long planned — Schechner said she spoke to architects during the SEC’s design phase about the need to accommodate the Mark I’s considerable weight in its new home in the building’s atrium. A more leisurely dismantling and reassembly had been planned for the summer of 2020, with more time for cleaning and documentation, but COVID intervened. This time, the desire to get the new exhibit in place and the building ready for students led to a compressed, two-week timeframe for the move, which was completed in early July.

To achieve the chore, the Harvard team brought in five professional riggers to augment the collection’s staff. The machine was carefully dismantled in stages and packed for the truck ride to the SEC.

Schechner said she hovered over the dismantling “like a nervous parent,” photographing and documenting the operation. “There’s a kind of beauty to it. There’s so much wiring and soldering, so many connections bundled and almost knit.”