Slavery isn’t dead, Clint Smith says. It isn’t even past. 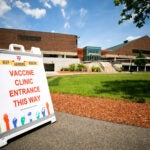 Author and poet discusses his latest book, a reckoning with the legacy of America’s original sin

America prefers tales based on simple binaries — good and bad, black and white, red and blue states ­— that can be easily digested and understood, said Clint Smith, author, poet, and staff writer at The Atlantic.

“There can be moral clarity, which is to say, slavery was a horrific institution. That’s a clear binary: It was bad and not good,” said Smith, Ed.M. ’17, Ph.D. ’20, during a Harvard discussion Tuesday about his new book, “How the Word Is Passed: A Reckoning with the History of Slavery Across America.” “But embedded within that are a whole host of complexities that inform how we understand [it].”

In conversation with Kyera Singleton, executive director of the Royall House and Slave Quarters, in Medford, Massachusetts, Smith said his book is a recognition of our physical and temporal proximity to the system of slavery.

“There are people who are alive today who love, who knew, who were raised by people born into chattel slavery,” said Smith during the event sponsored by the Presidential Initiative on Harvard and the Legacy of Slavery, a University-wide effort housed at Harvard Radcliffe Institute, in collaboration with the Royall House. “And so, the idea that we would suggest that this history was a long time ago, and that it has nothing to do with the contemporary landscape of inequality, that it is not deeply embedded in our social, economic, and political infrastructure to this day, is profoundly morally and intellectually disingenuous.”

Shining light on the living legacy of slavery is at the heart of Smith’s latest work, a mix of memoir, personal reflection, and deep research. Using several locations in the U.S. and one in Africa as a roadmap, Smith’s narrative traces the ways in which slavery was central to the nation’s founding and how it both continues to shape the national landscape and drive the impulse to remember, to memorialize, to distort, or to simply forget.

Smith noted that many Americans have no idea that the second-largest slave market in the country was not in the South but in New York City, that during the Civil War Union sympathizers could be found throughout the Confederacy, and that many Southern sympathizers lived in Union states. It’s vital to recognize, said Smith, “that sometimes we are told simple stories about things that were in fact, profoundly complex and nuanced.”

In the prologue to his book Smith writes that in 2017 he became “obsessed with how slavery is remembered and reckoned with, with teaching myself all of the things I wish someone had taught me long ago” after the statue of Confederate Gen. Robert E. Lee was taken down in his hometown of New Orleans. To learn more, Smith embarked on a trek through several states and to Senegal to visit cemeteries, plantations, museums, and other landmarks where “the story of slavery in America lives on.”

The book begins with a trip to Monticello, the Virginia plantation and home of Thomas Jefferson, key architect of the Declaration of Independence, third president of the U.S., and owner of more than 600 enslaved people. While on a tour focused on Jefferson’s ties to slavery, Smith noticed two women nearby who were clearly shocked by what they were hearing. When he approached them later, one of them said the guide’s talk “really took the shine off the guy.”

Their interaction served as an important reminder, “especially as I began this project, that there are so many millions of people across this country who do not understand the history of slavery in any way that is commensurate with the actual impact that it had on our history and on our contemporary landscape of inequality,” Smith said. It also helped him realize that in addition to his “own reflections and meditations” the book needed “the experiences of others.”

“There can be moral clarity, which is to say, slavery was a horrific institution. … But embedded within that are a whole host of complexities that inform how we understand [it].”
— Clint Smith

Smith’s entry on the Louisiana State Penitentiary, known as Angola, features the reflections of Norris Henderson, an advocate for criminal justice reform, who was incarcerated there for nearly 30 years for a crime he maintains he didn’t commit. At the end of the chapter, Henderson tells Smith he remembers picking cotton for the prison in a nearby field and that the biggest challenge was “not the work but just the mindset of being there and knowing you’re kind of reliving history, in a sense. I’m going through the very same thing that folks fought and died for, so I wouldn’t have to go through it, and here it is all over again.”

In contrast to a site like Monticello that is “pretty responsive to a new set of socio-political realities and is always interrogating what their responsibility is as an institution,” said Smith, Angola seems almost willful in its ignorance. Sometimes called “the Alcatraz of the South” or “the farm,” Angola is the nation’s largest maximum-security prison, until recent years notorious for its violence. It is built on the site of a former plantation, which took its name from the part of Africa its enslaved workers once called home. Seventy-five percent of the inmates are Black men, many of whom work crops watched over by guards on horseback armed with rifles. In the gift shop, visitors can buy T-shirts, shot glasses, and license plates. Coffee cups for sale are emblazoned with a picture of the prison’s watchtower and the words “Angola, a gated community.”

“So not only are you a place that is not interested in interrogating your relationship to this history and the way that it is physically embodied on the landscape … literally Black men working in fields while someone watches over them with a gun. But you’re almost making a mockery of and belittling the actual lived conditions of the thousands of people who are incarcerated there today in this moment,” said Smith.

On the issue of the removal of Confederate monuments, raised during a Q&A session at the end of the talk, Smith was unequivocal. “The idea that we would have people on statues in public spaces paid for by taxpayer dollars who lost the war that was fought because they seceded from the country to keep their human property — it just doesn’t make any sense,” he said.