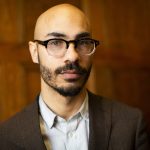 Looking to ignite questions rather than supply answers

What does “doubt” sound like? Specifically, scientific doubt, the kind of intentionally seeded, stalling uncertainty that has become an integral — and to many, a frustrating — feature of the debate over climate change.

To composer Yvette Janine Jackson, it has the low, somber insistence of the bass clarinet, skittering flute that cranks up anxiety, sonorous cello to hold things together, and the deep, doubting rumble of double bass.

Jackson, an assistant professor of music at Harvard, recently added her musical voice to efforts to reach those uncertain about global warming despite the scientific consensus that the Earth is warming and its climate is shifting in unpredictable and sometimes destructive ways.

Jackson’s 15-minute piece, “Doubt,” was written in collaboration with Naomi Oreskes, the Henry Charles Lee Professor of the History of Science whose academic work, including her 2010 book “Merchants of Doubt,” has focused on the denial of climate science. The composition was commissioned for Earth Day by Artivism for Earth, a project of the University of Utah. Elisabet Curbelo González, a University of Utah assistant professor of music and a project director, said Artivism’s intent is to foster an interdisciplinary exploration of the environment and so asked a variety of composers to pair with scientists to create work that ranges from Jackson and Oreskes’ piece on climate denial to collaborations on pollution, melting glaciers, the plight of the world’s whales, and water scarcity, among others.

“We’re so happy with this because it’s unique,” Curbelo said. “Naomi and Yvette, they’re brilliant, and they did a great job.”

Jackson said the leaders of the project offered to pair her with a scientist, but Jackson had already read “Merchants of Doubt” and saw the commission as an opportunity to get to know more people in the Harvard community — she arrived at Harvard just months before the pandemic struck, so her interactions had been limited. The collaboration consisted mainly of an exchange of ideas and additional materials, Jackson said. Oreskes, who played the piano as a child, said she was happy to help but also happy to leave the composing itself to Jackson.

“I think it’s incredibly important for artists to be involved in the conversations about these issues because I think one of the problems with climate change as an issue is that people don’t always really understand why it matters for them and for their lives,” Oreskes said. “The way scientists talk about climate change is very dry, but climate change is actually a very emotional issue because it potentially threatens our lives, threatens our health, our security, threatens the beauty of the natural world, things we really care about aesthetically. These are issues scientists are not well-equipped to discuss, but artists are.”

Jackson said that she had been interested in the impact of climate change on agricultural and low-income populations before the collaboration. The work with Oreskes, she said, was interesting because it focused on the other side of the question, the financial and political reasons why the problem wasn’t being addressed adequately.

“I thought it did work well, because that was the other side of the coin of what I had been thinking about: Who was causing these problems that I felt were going to impact some communities more quickly than others, even though we’re all on the same planet,” Jackson said.

Jackson’s work is centered on creating compositions based on historical or social issues. She decided to use a quartet as a nod to pandemic restrictions on group size and described the composition itself as abstract — she wanted listeners to reflect on the topic, rather than directing them how to feel about it.

“I often learn from people’s responses to these pieces and, for me, it’s about learning. Each listener is going to have a different experience based on the previous knowledge and experiences that they bring to their listening experience,” Jackson said. “There’s something about music that you can reach someone on an emotional level or capture their attention in a different way than with data alone.”

Though the Biden administration seems determined to make strides to address climate change, Oreskes said doubt hasn’t gone away and is still a significant part of the discussion.

“I wish we could say we’ve moved past it, that’s always been my hope and dream,” Oreskes said. “Of course we can disagree about the solutions, because we will have differences of opinion about different kinds of policy responses and that’s totally reasonable. But what’s not legitimate is when people misrepresent the science, misrepresent the facts, and unfortunately that continues today.”