Imagining an alternative America from a Native perspective 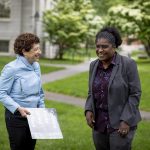 A.R.T.’s ‘Moving Through History’ project aims to break down barriers

What if we didn’t associate Colonial-era landmarks like the Old State House and Old South Meeting House only with the annual reading of the Declaration of Independence, but also with the words of Pontiac, the 18th-century Indigenous war chief who led intertribal resistance against the British? What if we could erase the borders of our city and see it, instead, as part of Turtle Island, as some Native people call the Earth? What if we could similarly reject the boundaries on self, gender, and even the division between performer and audience, for a little while?

These are the goals of “Moving Through History,” an immersive installation happening Wednesday and Thursday as part of the Creating Equal initiative, a collective of artists in conversation around themes of the American Repertory Theater’s upcoming production of “1776.” The event, presented by ART, was originally conceived as a participatory walking tour to well-known locations in Boston, featuring alternative histories presented through movement and text. With temperatures forecast for the 90s and only broken by thunderstorms, the entire event will now take place in the air-conditioned and wheelchair-accessible Old South Meeting House, 310 Washington St., Boston, from 5 to 6:15 p.m. both days.

“What does it mean to live in a borderless world where nature and the animal in our spirit get to be alive and soar?” said Brisa Areli Muñoz in describing the question at the heart of the project she created with Micah Rosegrant.

“The journey starts as a recontextualization, from revisiting our past to understanding our future and the cyclical nature of history,” said Muñoz. That begins where the walking tour was intended to start, at the Meeting House’s Revolutionary Spaces gallery, which is currently displaying “Imagining the Age of Phillis,” a series of short films depicting the life and times of figures like poet Phillis Wheatley Peters, who in 1773 became the first African American to have a book of her work published.

For a Native American perspective, participants will view Indigenous artist Elizabeth James-Perry’s depiction of Turtle Island. Then Erin Genia will recite Pontiac’s 1763 “Master of Life” speech. “Native Americans and Indigenous people have not been adequately portrayed throughout our history,” said Genia, a member of the Sisseton-Wahpeton Oyate/Odawa. “Pontiac was working with different spiritual leaders of different tribes. In this speech, he appeals to the spiritual side of the fight. He tells the story of the ‘master of life’ to get the troops to return to traditional ways and reject Colonial ways and drive out the settlers.”

Although the interdisciplinary event will now be rooted in one place, it will still incorporate movement, to be led by Rosegrant, who will be costumed in a flamboyant, flowing winged outfit. “We’ll be transforming into this flocking moment wherein we invite folks to embody this bird with me,” Rosegrant said. “A whole community of people moving together.” The event, which was envisioned as ending on Boston Common, will involve participants using the objects they’ve collected and been given to build a nest that, symbolically, will hold and nurture new, inclusive ideas.

With its themes of a borderless world and participatory community, the immersive event bridges the end of Pride month and the Fourth of July holiday weekend while evoking our collective emergence from the pandemic and long-overdue recognition of the Indigenous cultures pre-dating Boston’s Colonial history. That’s a lot for one 75-minute event, but as the organizers said, it’s a starting point — a way to spark ongoing discussion.

The result, said Muñoz, will be “a new way of thinking about history.”

“A lot of this journey is also asking ourselves what that freedom or what liberation looks like,” said Rosegrant. “Art can be guided by our collective practice of a future together.”