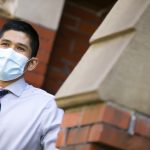 Nowadays the strategic virus-fighting game “hits a little too close to home,” the graduating senior from Cabot House said.

But, just like her favorite board game, Lee, a joint chemistry and English concentrator on the premed track, blends art with real-life scientific problem-solving to bring science to wider audiences: Her senior thesis merged literary analysis with her research on how antibiotic-resistant Shigella bacteria commandeer human cells. She also worked as a journalist and graphic designer for The Harvard Crimson and a first responder for CrimsonEMS, which Lee said was like living a dual life. “I can be two separate people,” she said.

That split personality felt unwieldy at first. Now, as she prepares to start graduate studies at Harvard Medical School in the fall, she sees her double life as a gateway to reach larger audiences, giving her more languages with which she can not only communicate with future patients, but also with kids curious about science and communities with little access to reliable or engaging information on topics such as GMOs, climate change, and vaccines. Like her medical heroes, Atul Gawande, Oliver Sacks, and Jerome Groopman, Lee hopes to balance careers in medicine and writing to create bridges to more diverse populations, a critical challenge in a country where misinformation can overpower science.

“I hope to be able to empower patients about their bodies, their health, health care, and science,” Lee said.

Lee’s interest in creative writing and science started back in middle school in Ridgefield, Connecticut. In eighth grade she wrote a poem describing the lush experience of eating during a visit to China (the “sheen of egg custard tarts and the sound of oil frying in the wok”). Her teacher noticed her gift for imagery and encouraged her to continue writing. She still writes poetry today.

During high school, Lee started blending her two passions: She wrote Shakespearean sonnets about RNA and dressed in Victorian garb to recite them for her science class, choreographed and performed an interpretive dance about sustainable agriculture, and became obsessed with science-fiction novels like Margaret Peterson Haddix’s “Double Identity” (foreshadowing of her future double life).

“I hope to be able to empower patients about their bodies, their health, health care, and science.”
— Truelian Lee ’21

Lee’s desire to pursue a career in medicine rose out of a tragic event. When she was 5 years old, her father died in a car crash. Inspired by the EMTs who fought futilely to save his life, she applied to join CrimsonEMS. She especially wanted to experience caring for patients as an EMT and to help grow their “Stop the Bleed” program, part of a national initiative to train bystanders how to stanch bleeding before first responders arrive. Lee took interest in “Stop the Bleed” in part because of the Sandy Hook mass shooting, which happened just 20 miles from her hometown. She helped win a Harvard grant to put together kits with gauze, gloves, tourniquets, and bandages, and placed them around campus. She also launched a series of campus-wide trainings.

Lee’s EMT job and her creative work as a reporter and graphic designer for The Crimson let her reach across borders and communicate with new audiences. That desire — to try out new languages and stories for disparate audiences — also inspired Lee produce a collection of online stories called “The Periodic Fables,” scientific re-writes of familiar children’s stories. “The Very Hungry Caterpillar” became “The Very Hungry Enzyme” and told the story of an enzyme discovering how to attach to food (or substrates) in the body. Lee, who writes, illustrates, and designs the stories, had the idea last summer and has already created “The Cation in the Hat,” “Goldilocks and the Three Codons,” and the first chapter of “If You Give a Planet Water.”

“I wanted to create a really accessible, fun resource for younger audiences,” Lee said. “I wanted to increase science literacy.” But she still finds it challenging to translate complex concepts into accessible language. “I’m still practicing that.”

She also studied it: For her thesis, she analyzed two works of literature about science written for a general audience — Michael Crichton’s sci-fi thriller “The Andromeda Strain,” which follows a team of scientists as they try to manage an outbreak of a deadly extraterrestrial microorganism, and biochemist Arthur Kornberg’s autobiography — and then wrote two separate, side-by-side narratives on her research on Shigella. Borrowing techniques from Crichton (fast-paced, action-packed language) and Kornberg (slower, but with more detailed descriptions), she designed one story for a lay audience; the second, more technical story was written for a scientifically literate audience.

Lee hopes to one day write a science-fiction novel like Crichton or medical nonfiction like Gawande. Or both. She’s also unsure which area of medicine to pursue. But if she had any residual reservations about her double life in medicine and writing, they’re gone now.

“Because I’ve balanced both,” she said, “I’ve been able to offer a unique perspective. And I don’t regret that at all.”