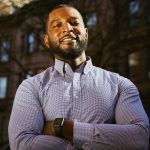 Building on a vision

Swaminathan searches for the beats that bring worlds together

Rajna Swaminathan was only 5 years old when she started to play the mrudangam, the barrel-shaped, two-headed drum that is the foundation of the south Indian classical music known as Karnatik. At the time, the instrument was bigger than she was. She complained to her father, an accomplished player and her first teacher, that her hands were too small to master it. He counseled patience and persistence and also encouraged her interest in learning to play the piano, too. The new instrument strengthened her fingers. It also fired her creativity.

“After a while, I began to improvise and play some of the rhythms on the piano that I was playing on the mrudangam,” she says. “I really wanted to bring those two musical worlds together.”

When she graduates this May with a Ph.D. from Harvard’s Graduate School of Arts and Sciences (GSAS), Swaminathan will have spent the better part of her life exploring, improvising, and bringing together different worlds — in music and in life. Now, after six years under the guidance of Franklin D. and Florence Rosenblatt Professor of the Arts Vijay Iyer, she hopes to create music that inspires, uplifts, and serves as a space where people of diverse experiences can connect honestly.

Born at the crossroads

In many ways, Swaminathan was practically born at the intersection of different worlds. She grew up in the suburbs of Baltimore and Washington, D.C., the daughter of first-generation immigrants from India. Both her parents were scientists. Both were dedicated musicians. Swaminathan’s father, now retired, was a physicist at the Johns Hopkins University Applied Physics Laboratory, but his passion was the mrudangam.

“He would wake up early in the morning and practice for hours before going to work,” Swaminathan says. “Something about seeing him do that — how much love he had for this instrument — and being able to start sharing it with him was really important for me, both personally and as a musician.”

Her mother, now deceased, was a computer scientist who worked for NASA on the Hubble Space Telescope. She was also a gifted singer who performed often with her husband. Swaminathan says that while her father taught her the mrudangam, her mother encouraged her to pursue her love of music and kept her connected when she was traveling between cultures.

“It was hard to understand or contextualize the musical education I was getting when I was growing up,” she explains. “My friends didn’t really know what the mrudangam was. And when I started going to India in the summer, I had another set of friends there, so it felt a little like I was living a double life. These two worlds didn’t meet often, so my mom’s support was always an important source of stability.”

“I always find myself trying to find honest ways of connecting with people without preconceived notions of how we can interact. I’m always in search of that in-between space. Ultimately, I want to see if there is a way we can create worlds together.”
— Rajna Swaminathan , Ph.D. ’21

As Swaminathan got older and showed proficiency as a musician, both she and her father began to travel back to India to study with the renowned mrudangam master Umayalpuram K. Sivaraman, who received one of the country’s highest civilian honors, the Padma Vibhushan, in 2010. It was on one of these trips when she was 13 or 14 that Swaminathan made her debut as a performer at the renowned Chennai Margazhi music festival.

“I felt humbled,” she says. “People come from all over the world to perform and listen to the concerts. They were playing at a very different pace and scale than I was. Just amazing musicians. I thought, ‘I need to work on this and get better so I can play with them.’”

Swaminathan did get better. She returned to Chennai every year through her first years in College to play an exhausting schedule of concerts in December. The rigor and richness of the experience developed her stamina as a performer and transformed her ability to improvise and create.

“There are hundreds of concerts going on all over the city at any given time in that month,” she says. “You don’t rehearse. You just meet on the stage and put the performance together on the spot. I would play maybe 30 or 40 concerts in a month like that, meeting all sorts of different musicians and performers. Going through that experience gave me a deep understanding of the music and enabled me to grow.”

Despite her talent and accomplishments as a musician, Swaminathan wanted to follow in her parents’ footsteps and become a scientist. Many families might have encouraged their children to put their creative lives on the back burner in favor of a hard science education and a more conventional career path. Swaminathan’s encouraged her to pursue her passion.

“Both my parents were always supportive,” she says. “I never felt any pushback from them or any sense of ‘Oh, you need to find a career and keep music as a hobby.’ They felt like they had made that sacrifice so that I could be free with what I wanted to do.”

To heal through rhythm

Although Swaminathan didn’t major in music as an undergraduate at the University of Maryland, she continued to perform, spending summers in New York City and moving there after graduation to engage with jazz and Black American experimental music. She lived the life of a freelance musician for a couple of years and formed the band RAJAS, which enabled her to try new approaches to improvisation. The experience also gave her a deeper understanding of the music she was playing, which eventually drew her to GSAS.

“I came to Harvard not only to come to terms with the history of caste and gender in Indian music, but also to understand my role as an artist at the intersections of Indian music and the Black experimental music,” she says. “I wanted to find a creative voice that took these social histories into consideration and explored ways that they might be remediated in music.”

Another reason that Swaminathan came to Harvard was Professor Vijay Iyer. She had first met the MacArthur “genius grant” winner when she was 8 years old and Iyer was collaborating on a project with her old teacher, Sivaraman. The two reconnected when Swaminathan was in college. After Iyer founded the Department of Music’s Program in Creative Practice in Critical Inquiry, Swaminathan became its first student.

“It’s been a unique opportunity to balance between research — the history and theory — and the actual practice. I can ask a question, do the reading, and then the answer can be found somewhere in the music. It’s a constant back and forth of experimentation and reading and trying new things. That’s been the process for me over the past six years.”

Iyer calls Swaminathan “a groundbreaking 21st-century composer-performer and thinker.” He says that one of the things that makes her music so exceptional is the way it reaches out from its south Indian foundation to engage with other forms, such as jazz and Black American experimental music, and to move beyond traditional categories.

“Rajna is creating a body of original, innovative, stirring work that extends and complicates the traditions she carries, imagining new possibilities for community, ethics, and collective creation,” he says. “From her unique vantage as a South Asian/American queer experimental composer-performer, Rajna is creating exquisitely imagined, beautifully executed music that transcends classification.”

With Swaminathan in the vanguard, the program has grown and shifted, embracing live performance and developing a rich culture of collaboration and improvisation that includes students at the College, GSAS, and faculty as well. Outside of Harvard, however, she has faced challenges. The mrudangam has traditionally been an instrument for men in Indian culture. Female virtuosos like Swaminathan are rare. Throughout her life, she’s had to deal with gendered expectations and assumptions about whether women had the strength and stamina to play the drum — and whether it is culturally appropriate for them to do so.

“In India, there are layers of ideas about gender and caste purity when you’re dealing with an instrument that is made in part of cowhide,” she says. “It’s a very deep and complicated story. Some people say that drumming has an association with healing traditions and as we’ve come into modern society, that power to heal through rhythm has been taken away from women.”

While it is not Swaminathan’s overt intention to reclaim the rhythmic power that’s been taken from women in modernity, she does believe that her music can contribute to a sort of healing process — one that enables people from different backgrounds and experiences to connect and empathize with one another.

“There is a deep potential in rhythm to change how we relate to each other,” she says. “It’s a way for us to align across worlds of culture, race, ethnicity, gender, and also to learn about one another’s pace of being.”

Swaminathan realizes this potential through her composition “Altitude,” a piece that was co-created with fellow GSAS student and RAJAS vocalist Ganavya Doraiswamy. Part of a new suite titled “Apertures” slated for premiere in 2021, “Altitude” brings listeners into a crossroads space, liminal, where many different musical ideas meet: the slow unfolding of an Indian raga; the freedom of a modern jazz piece; the wisps of sound that meet the ears during a hike on a quiet mountainside; the chants in a piece of sacred music. Swaminathan says the composition is all of these things and something even more fundamental.

“It’s people finding their way,” she says. “It’s about listening to your own rhythm and being able to open up slowly to another person’s rhythm; to accept both and find a way to be together even as you’re in a space that’s in between. It’s the sound of alignment.”

After Commencement, Swaminathan looks forward to life as a full-time artist, perhaps with the support of an academic institution if it allows her to deepen and expand her creative work. Along those lines, she’s in the running for a faculty position or a postdoctoral fellowship at one of the University of California campuses. In the meantime, she’s thinking a lot about the pandemic and about musical ideas that would allow her to “take something away from the stillness that we’ve had for a year.” Whatever direction the future takes her, Swaminathan will continue her journey with the rhythms that connect us all.

“There’s sort of call to honesty at this moment,” she says, “to not getting caught up in pretending. And so, I always find myself trying to find honest ways of connecting with people without preconceived notions of how we can interact. I’m always in search of that in-between space. Ultimately, I want to see if there is a way we can create worlds together.”