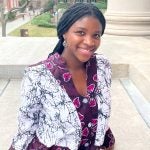 In the middle of his medical training, Austin Marshall stopped to earn an M.P.H.

Austin Marshall, M.P.H. ’21, wants to be a physician-advocate for the LGBTQ+ community and care for patients as a doctor, as well as to steer policy to help improve health systems that serve many. Working at a free clinic in Berkeley, California, shaped his public health path, his research on mental health access for LGBTQ+ elders during his time at Harvard T.H. Chan School of Public Health, and his many hidden talents, from singing Indian classical music to competing in esports to fixing his friends’ iPhones.

As an undergraduate at Berkeley, I was originally a bioengineering major. But volunteering at a clinic that provided services for people who didn’t have access to insurance or were discriminated against by the mainstream health care system — such as the homeless and gay and bisexual men — convinced me to switch to public health. Working at the clinic showed me how situations can arise where the health of an entire group of people is ignored and marginalized. It highlighted for me why we need people educated in public health to make critical policy decisions and who believe in the care of these communities.

After earning my B.A. in public health, I returned home to work on my M.D. at UC San Diego as part of the PRIME Health Equity program. The program trains future physicians focused on fighting health disparities in their communities and in the world more broadly. As part of this program, we complete a master’s degree between years three and four of our medical school curriculum — and I knew I wanted to attend Harvard Chan School for my master’s degree to further my knowledge of health policy and to improve quality health care access for LGBTQ+ populations.

Completing my Harvard Chan practicum project at The Fenway Institute was easily the highlight of my experience at the School. I worked on a systematic literature review looking at mental health care access for LGBTQ+ elders. One of our key findings was that provider competency regarding LGBTQ+ elder care is really lacking. We also found that the more impairments people have in terms of their mental health, the more difficult it is for them to maintain both their HIV care appointments and their general care appointments. And a lot of LGBTQ+ older adults have less familial support than their straight counterparts, because a lot of them may not have a legally recognized partnership or lost a long-term partner during the AIDS epidemic. Not having access to these social supports makes it harder for them to retain care and makes it more likely that they’ll develop a mental health diagnosis.

One of my favorite things about Harvard Chan School has been getting to meet and work with people in my health policy cohort. We’ve been doing socially distanced park hangouts for most of the year, rain or shine — including in the snow! The people that the School recruits are just incredible, so being able to learn from them and become friends with them has been a highlight. The same thing goes for the Zuckerman Fellowship, which was a big factor in my decision to come to the School. The people in that cohort are leaders in different Harvard schools across disciplines, but they all have the same commitment to public service and helping underserved populations. They inspire me to keep fighting against inequities and to recognize the interdisciplinary solutions required for action.

One hidden talent of mine is that I sing Indian classical music. I’m half-Indian, half-white; my mom moved to the U.S. from India when she was 18. She learned from a famous classical singer in India, and she taught me and my brother how to sing. I started learning pretty young, like 5 or 6, and I’ve been singing ever since. Whenever I go back to San Diego, I’ll make time to sing. I also just do it for myself in my free time.

Something people might not know about me is that I’m ranked among the top 1 percent of Overwatch players worldwide. Overwatch is an immersive game that’s set in a sci-fi future universe. The game is played as an esport, which is basically professional gaming. Right before I started medical school, I thought of potentially trying out for a league to play professionally, but I went the medical school route instead.

I repair Apple laptops and iPhones as a side hobby. I had a friend in high school who had multiple Mac computers that didn’t work. They were sitting in his closet. I asked if I could take a look at them and take them apart, and he said sure. I used online guides, put in a few new components and they started working again. Now, if people have iPhones that need a battery replaced or a MacBook that has a noisy fan, I’ll repair it. I find it therapeutic to use my hands and strategize. The tools you have to use for repair are tiny. It’s almost like surgery.

My ultimate way to unwind is regular exercise. It’s a must during the pandemic. First I work out or go for a run, then I might settle down with a video game — or a YouTube documentary about a video game.