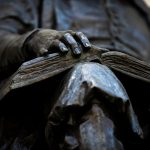 Eighty percent of the world’s blind live in low- and middle-income countries, where eye injuries from manual agricultural work are common and eye doctors scarce.

Untreated, those eye injuries — typically easily treated in industrialized nations — all too often lead to corneal ulcers, infections, and blindness, affecting workers’ ability to earn a living in the very places where the social safety net is thinnest. To Lawson Ung, the resulting disruption, poverty, and loss of human potential is a call to action.

“Corneal infections tend to be particularly severe. If you lose transparency of the front window of the eye, the cornea, then the ability of light to transmit to the back of the eye, the retina, is limited,” said Ung, who graduates this spring from the Harvard T.H. Chan School of Public Health’s master of science program in epidemiology. “Even tiny abrasions to the front surface of the eye can develop very quickly to blinding ulcers, blinding infections of the cornea.”

Ung, a native of Sydney, received his M.D. from the University of New South Wales and began practicing at Liverpool Hospital, which serves a population of 1.2 million, including many refugees and migrants. Ung had an interest in ophthalmology and wanted to gain research experience, so he emailed the leaders of several labs that were working on eye diseases, asking whether they needed an intern. James Chodosh, the Edith Ives Logan Professor of Ophthalmology at the Massachusetts Eye and Ear Infirmary and Harvard Medical School, responded and asked whether Ung wanted to talk further. Ung did him one better and hopped on a plane for Boston. Within a day of the interview, Ung had accepted a position in Chodosh’s lab. He started work there in June 2018. Chodosh said he’s since become a fan.

“On the scientific front, he’s meticulous to an incredible degree,” Chodosh said. “To say he works hard is a gross understatement. His dedication is over the top in whatever he does.”

Chodosh reserved some of his praise for Ung’s work outside of the lab. Ung has thrown himself into the MEEI community, serving on the hospital’s diversity, equity, and inclusion committee and running two book clubs. He’s conversant with the classics, plays a cello named “Archie” — he learned when he needed an outlet after medical school — and even stargazes with a pair of astronomical binoculars that allow him to see Jupiter’s largest moons.

“One of the things that has always fascinated me is how small we are,” Ung said. “We are just little specks in this thing we call the universe and this thing we call life, and I just look up at the sky, and it fills me with a sense of wonder.”

Under Chodosh’s tutelage, Ung learned more about eye diseases — Chodosh’s lab studies, among other things, corneal infections and ulcers that can lead to blindness — and gained an interest in the social determinants of where they, and blindness overall, are most common. The answer is that they more frequently occur in poor and middle-income nations, where eye care is harder to find. The result, Ung said, is that most of the world’s blindness is found among populations with the fewest resources to manage it. Some of it could be remedied through corrective lenses, common in more developed locations, while much of it is preventable if eye injuries and infections are caught early.

The difficulty in finding a solution to the problem, Chodosh said, is that the field has been static for many years. It’s known that there are about 2.2 billion who are visually impaired or blind in the world, that important causes are cataracts, eye injury, and lack of access to corrective lenses. About 300 million are blind or severely visually impaired for reasons not owing to either cataract or uncorrected refractive error. However, detailed data about who, where, and why are missing or outdated.

“The epidemiology that is out there is partial and old, so we don’t know the full burden,” Chodosh said. “We need to describe the spectrum and impact of disease, and once understanding that, come up with solutions. Lawson has been working very hard on molecular diagnostics for the disease, which we think will transform care of the disease from what it is now, which is mostly guesswork and empiricism.”

That need to understand not only the disease itself, but also its global sweep and unrecognized burden, brought Ung to the Harvard Chan School in September 2020. Though the one-year program was conducted entirely remotely, Ung said he counts himself lucky to have been able to study there, even during pandemic times.

Ung worked with Associate Professor of Epidemiology William Hanage on a project that evaluates how the world, with the World Health Organization front and center, might respond differently to the next pandemic. Ung said the work recognizes that the WHO has had a difficult time recently, not only because of the global pandemic, but also because of years of neglect and disinvestment from member nations.

“We would not have eliminated smallpox without WHO; we wouldn’t have made marked progress toward alleviation of childhood and maternal morbidity and mortality,” Ung said. “We have to think about how we are going to do this in the future … because there will be a next time.”

Ung, whose family fled to Australia from the Khmer Rouge and Cambodia’s Killing Fields in the mid- to late-1970s, said he plans to enter the Chan School’s Ph.D. program in epidemiology in the fall. He hopes it will equip him to work internationally on the world’s major infectious diseases, which still place a disproportionate burden on the most vulnerable communities.

“I think of how much human potential is lost because folks are unfortunate enough to be born into circumstances such as those that characterize my parents’ upbringing,” Ung said.