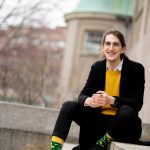 Growing up in New Orleans, Kelly Brignac was immersed in customs that had deep roots in French culture. One of the most meaningful to her was the King Cake — a traditional dessert associated with the Christian holiday of Epiphany, but also served on special occasions. At one such event, Brignac got a slice that contained a baby figurine representing the Christ child — a symbol of luck and prosperity.

The French influence on her childhood was made clear when, years later, she arrived in France and experienced the tradition at its source. On a research trip in Aix-en-Provence as a Ph.D. student at the Graduate School of Arts and Sciences (GSAS), Brignac again found a figurine in her slice of King Cake.

Even as she enjoyed a treat that conjured memories of home, however, Brignac was confronting a darker aspect of French culture — one expressed through colonialism and brutal labor practices even after the 1848 abolition of slavery.

“My research was driven by a broader desire to understand more of the world, to reveal how different perspectives interact,” she says. “The King Cake baby from New Orleans and the figurine from when I was researching in Aix-en-Provence are connected. They speak both to the influence of French tradition and how it is reflected in colonialism.”

When she graduates from Harvard this month with a Ph.D. in history, Brignac will reach a milestone in her personal and intellectual journey through French colonial history. But while the road from childhood in the old French port of New Orleans to an academic career exploring the history of the French Empire may seem logical, for Brignac it was a bit like the figurine in the King Cake — something unexpectedly revealed.

As a child of the Big Easy, Brignac says she didn’t immediately appreciate the world around her. “I was surrounded by history in New Orleans, but it’s really easy to take it for granted.” She didn’t have a clear picture of what kind of career she wanted to pursue, but never thought of getting her Ph.D. because “in high school, I didn’t know what a Ph.D. was.”

Brignac was an outstanding student, however, and received a full scholarship to Millsaps College, a small liberal arts school in Mississippi. There, she embraced her passion for study and began to develop a love of academia. She also met Professor Amy Forbes, a scholar of French history who sparked Brignac’s interest in an academic career. “She had such a profound impact on my education,” Brignac says. “She put the professional interests and the personal interests together.”

With Forbes’ encouragement, Brignac obtained her B.A. from Millsaps and an M.A. from Vanderbilt University, both in history. When she arrived at GSAS in 2015, she had her general research topic in mind — the slave trade and slavery in the French Empire. Brignac felt compelled to study the history of slavery because she was descended from French colonialists, had grown up in a former slave port, and, perhaps most of all, because it wasn’t taught to her in high school.

“When I went to college, I started understanding there’s this whole other side to not only New Orleans but also the rest of the world,” she said — and that stoked her intellectual curiosity. When she traveled to Senegal and France to do research, the topic of her dissertation started to take shape.

In Senegal and at the colonial archive in France, Brignac started going through boxes of documents. What surfaced disturbed her.

“I found that the French, after the abolition of the slave trade and slavery, were buying Africans on the slave markets in Africa and justifying their purchase of these people by saying they were investing in their freedom,” she says. “Essentially, they said, ‘We’re going to free them, but they have to work for us in the French colonies for 14 years first.’”

With guidance from her Harvard adviser, Mary D. Lewis, Robert Walton Goelet Professor of French History, Brignac decided to write her dissertation on the forced indenture (engagement à temps) of Africans in the French empire from 1817 to 1861. To conduct the research necessary, she would need access to materials in France, Senegal, Nosy Boraha (an island off Madagascar), and other locations on the western and eastern coasts of Africa. She also needed support from institutions both within and outside Harvard. These included Harvard’s Minda de Gunzburg Center for European Studies, Weatherhead Center for International Affairs, and Center for African Studies.

“These institutions were fantastic because not only did they enable me to research in France, but they also understood that studying the French Empire meant studying the French colonies,” she said. “CES in particular, allowed me to travel to places such as the French department of Réunion in the Indian Ocean, as well as Senegal and Ghana.”

As a first step, Brignac learned the Wolof language so she could communicate with Senegalese archivists and historians in their tongue, instead of French, the language of Senegal’s former colonizers. Another important aim was to counteract the historical erasure of slavery and other exploitative labor practices — and the systematic erasure of the people who were sold into these systems.

“I centered my dissertation research not only on how the French justified this forced labor practice, but also how those workers themselves experienced the labor practices,” she said.

Brignac cited three letters, spread across several archives, that reveal the story of a man named Turpin who was bought as a captive in Senegal. The letters reveal his transport around the Cape of Good Hope and his work building plantations in Madagascar. Brignac says that this window into the life of a forced laborer is small but important.

“Their lives are reduced to scattered references, and it took very detailed note-taking to piece their stories together,” she says. “For people like Turpin, I had to analyze what information I could find, to bring out his perspective.”

Lewis, Brignac’s adviser, praised her ability to dig through the past and reveal aspects skipped over by many scholars.

“Kelly has a nose for archival research and a commitment to putting people at the center of her study,” she said. “It is this commitment that allowed her to craft a gripping exposé on the long shadow that slavery cast on labor regimes even after its abolition.”

After Brignac graduates, her next stop will be Colby College, where she will join the faculty as an assistant professor of history. Wherever she goes, Brignac said it’s her responsibility as an academic to uncover or unbox the ugly sides of the past because their impacts can still be felt — and they’re not all as innocuous as a small figurine in a King Cake.

“There is still a lot of colonial history to uncover, including the history of racial exploitation and racism,” she said. “I’m ready to get to work, surrounded by people dedicated to uncovering these histories and highlighting them in their research.”