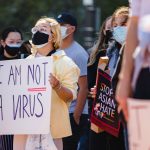 In the early days of the COVID-19 pandemic, as state and local officials scrambled to impose lockdowns, public health and medical experts grew increasingly worried about groups they feared would be hardest hit by the disease.

As infection and death rates spiked, statistics began to show that one group, communities of color, was indeed being disproportionately affected. On Wednesday a panel of historians tried to unravel that disturbing and familiar story during the virtual talk “Medical Racism from 1619 to the Present: History Matters.”

“The pandemic of COVID-19, like so many other epidemics, has revealed deep and persistent racialized inequalities in U.S. society. And in many respects, these inequalities are tied to structural racism within many U.S. institutions, including medicine and public health,” said moderator Evelynn Hammonds, chair of the Department of the History of Science, Barbara Gutmann Rosenkrantz Professor of the History of Science, and professor of African and African American studies.

The discussion, presented as part of the presidential initiative on Harvard and the Legacy of Slavery at the Harvard Radcliffe Institute, in collaboration with the Project on Race & Gender in Science & Medicine at Harvard’s Hutchins Center for African & African American Research, explored how lessons from history can promote health equity today, centering on the need to address deep social, as well as structural and systemic, failures within government and the nation’s health care system.

Author and panelist Jim Downs cited the American Civil War, during which more soldiers died from disease than battlefield wounds, as a cautionary tale. As the nation’s 16th president began drafting an order that would abolish slavery, he said, smallpox cases in Washington, D.C., were on the rise.

“Lincoln is thinking about the Emancipation Proclamation, but he’s not thinking about the humanitarian questions of how many people were going to survive,” said Downs, a historian at Gettysburg College and author of “Sick From Freedom: African American Sickness and Suffering during the Civil War and Reconstruction.” “There were no efforts, no consideration about where freed people were going to find food and to find clothing. And so as a result, the smallpox epidemic explodes.” Whites also wrongfully blamed Black people for spreading the disease, he added, ignoring the fact that they lacked “basic necessities to survive.”

“When we think about how epidemics end, and we think about this bigger question,” said Downs, “we also have to be concerned about other social and political forces that are happening.”

Some argue that a lingering historical mistrust of the health care system has made some African Americans hesitant to sign up for the vaccine. One incident frequently cited as contributing to that sense of wariness is the Tuskegee syphilis study. But Susan M. Reverby, a historian of American health care and author of “Examining Tuskegee: The Infamous Syphilis Study and Its Legacy,” thinks relying too closely on that narrow narrative is a serious mistake.

The so-called Tuskegee experiment began in 1932 and ran for 40 years. The federal Public Health Service, in collaboration with Tuskegee University, tricked hundreds of infected Black men in rural Alabama into believing they were receiving medical care when they were not, so researchers could observe what would happen when the disease was allowed to run its course untreated.

Reverby warns that using this episode as the only or primary way to frame the debate about racism and resulting mistrust in the health care system ignores critical “historical lessons.”

“If the men had had access to decent health insurance, they would not have been as vulnerable to the offer of the Public Health Service of free medical care. If there had been more sex education, condoms available, and public health, there would have not been so much syphilis. If racist assumptions about biological difference hadn’t existed, the study would never have been done in the first place,” she said. “So in the end, I think we have to consider the way structures of racism get into the health care system, and shape its outcomes, not just in the seeming memory of medical harm that ended nearly 50 years ago.”

History can help current medical professionals better understand how to cope with something like COVID-19, said Reverby, citing work by scholars who in 2007 attempted to draw lessons from the 1918 flu pandemic. Their research demonstrated that communities that “closed more quickly” had better survival rates than those that remained open, a finding that helped inspire today’s social distancing regulations. But using the history of the Tuskegee study, and other cases in which Black bodies were exploited for the purposes of medical research, to “explain the problem” of mistrust is reductive and misses key structural failures.

“All of those things get thrown in as if some journalist or some medical person now understands everything that happens to Black people … rather than understanding all of the structural reasons that this happened.” In terms of COVID-19, health officials should have coordinated closely with the most vulnerable populations first, she said, working with local organizations to offer vaccines in community centers instead of sports stadiums. “If we had started there, we could have understood the history better, and we could have stopped some of the spread.”

The panelists agreed that, although social distancing measures have proven effective at halting the spread of COVID-19, not enough thought was given to how they would affect the nation’s most vulnerable populations. “I was thinking about the families and public housing, five people living in a one-bedroom apartment in an apartment complex shared with 100 other families using one elevator and then being euphemistically labeled ‘essential workers,’” said Downs, adding that historians have particular insight on how such measures have affected marginalized communities in the past.

Hammonds examined how diphtheria was successfully contained in her book “Childhood’s Deadly Scourge: The Campaign to Control Diphtheria in New York City, 1880-1930.” She lamented that in the early days of the pandemic, many approached the notion of lockdowns and social distancing without considering the bigger picture. “The question is not ‘everybody just social distance,’ but what makes social distancing possible, right? And who can social distance? Under what circumstances? How is that going to effectively help control the spread of the disease?” Gradually, those questions began to “filter into much of the public discourse,” she added, “but in the beginning, in the first instances, those were not the questions being asked.”

Reverby said she is hopeful that the nation is at an inflection point, and that key discussions around the toll the pandemic has taken on people of color, and what it means to be an essential worker, or live in crowded housing, have helped dispel false notions about Black people being inherently more susceptible to disease. Younger generations inspired by the Black Lives Matter movement and the increase of people of color in professions like medicine and law in which they are poised to make a difference, are also helping spur change and dismantle structural racism.

“I think what we’re seeing is different organizations and different people understanding that the old reforms didn’t work, that we really actually have to do something really serious, and that we have to fight for those things,” she said.

Moving forward, Downs said health officials also need to expand their studies beyond a focus on infectious disease to include other critical health issues affecting communities of color, such as studies “about infant mortality, or asthma, or other kinds of issues that are affecting Black people that are not necessarily posing a threat to the larger public.”