Turning hip-hop on its head 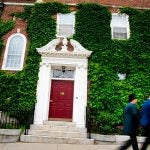 Some pomp for the circumstance

Austin Martin’s first love was basketball. As a kid, he used to spend hours practicing in his driveway, creating rigorous drills for himself to complete before dinner.

His second love was hip-hop, and he took to it with the same discipline that he brought to basketball. He would memorize lyrics, study his favorite rappers, and learn how each rapper composed his or her raps. “I wanted to learn everything about hip-hop music and culture,” he says.

Martin’s encyclopedia knowledge of hip-hop, however, contrasted with his school performance. While he could sit for hours and commit entire albums to memory, in school, he had trouble focusing. Martin, his family, and his teachers knew he was bright and talented — but those talents weren’t manifesting as good grades.

That all changed when he started high school. Martin realized that the skills he learned from hip-hop — vocabulary, figurative language, storytelling, confidence — were the same ones he needed to succeed academically. Suddenly, learning was something he knew how to do, and do well.

“I realized early on that 67 of the top 100 SAT words were in popularly recognizable hip-hop songs.”
— Austin Martin, Ed.M.’21

When Martin was admitted to Brown University he found himself surrounded by entrepreneurial students — “people who had started businesses and were acting on their ideas to solve real social problems.” Steeped in this environment, Martin realized he could leverage his own experiences to make change. “I saw that you could actually launch an idea and make a huge difference as a young person. Once I saw those examples, I decided that I wanted to do it,” he says.

At 19 and a freshman at Brown, Martin started Rhymes with Reason, a gamified learning experience that teaches students vocabulary and other ELA (English Language Arts) skills through hip-hop music. Rhymes with Reason is built on the premise that the things kids like, such as popular music, can be leveraged to promote academic success. Martin knew this firsthand, of course, from his time in school, and he found data to support his claim. “I realized early on that 67 of the top 100 SAT words were in popularly recognizable hip-hop songs,” Martin explains.

Today, Rhymes with Reason is an app-based educational tool. Students can access the app on their computers or phones, and educators can assign activities and track student scores and participation through teacher and administrative dashboards. The app’s central function is to facilitate vocab acquisition across several different categories: common core, college prep (SAT, ACT), workforce development/career readiness, and financial literacy. In addition to vocabulary, the app helps students develop ELA-standards aligned skills like inferencing, figurative language, theme, tone, and connotation. The goal is to push students to learn vocabulary at a deeper level, in context.

“Students listen to these artists on their own time. We have found a way to align national curriculum standards to this thing students do for fun,” says Martin. “It gives students a compromise. Now teachers can say, hey, you can still listen to Ariana Grande, but go learn some sixth-grade common core vocabulary words at the same time.”

Rhymes with Reason’s strength, explains Martin, is that it is authentic: it uses language from students’ cultures to teach academic skills. This is especially important for students who may see their school as outside of their culture, he says. “Traditional texts, like Shakespeare or certain SAT questions, advantage students who were exposed to the dominant language and culture growing up,” says Martin. “Hip-hop is the most popular genre of music in the world. We are teaching ELA through a more familiar and accessible context.”

Martin may be young, but he’s already found serious success in his work. In 2019, Rhymes with Reason partnered with Chance the Rapper’s nonprofit Social Works. As part of that collaboration, they designed a custom learning playlist for Chicago, Chance the Rapper’s home city. The playlist allowed students to learn SAT vocabulary from Chicago artists exclusively. Martin was humbled by the opportunity to work with the philanthropic organization of one of his favorite artists. “When I first came up with the idea [for RwR], this would have been goals,” he says. “To achieve that already and to have an impactful collaboration with them was really exciting.”

This year, Martin made the International Literacy Association’s 30 Under 30 list for promising innovators in literacy. And in March, Rhymes with Reason won the Harvard iLab’s Social Innovation Fellowship Award.

Martin is excited about these accolades — “It’s crazy to think that I was able to make something like this happen,” he says) — but they are not his most valuable markers of success. Instead, says Martin, the most exciting outcome of Rhymes with Reason is watching the program work. He loves hearing feedback from teachers that it has helped their students, or that students are requesting they be assigned Rhymes with Reason for homework. Knowing that his work is enabling student success in some way — that his work is making education more equitable — is the highest accolade Martin could ask for.