To support and defend the Constitution 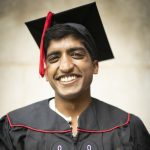 The cap (and gown) on a most unusual senior year

The conferring of degrees is a critical rite of passage for any graduating student, but for those who are also members of the Reserve Officers’ Training Corps (ROTC), the week of Harvard Commencement ceremonies brings an additional milestone: the commissioning service.

This year 11 members of the Harvard Class of 2021 will take their oaths as new military officers during small, in-person services attended by a few select family members and friends. The combined U.S. Army/U.S. Air Force event will take place at Hanscom Air Force Base in Bedford, Massachusetts, while the U.S. Navy ceremony will unfold on the deck of the U.S.S. Constitution, the world’s oldest commissioned warship afloat, docked in the Charlestown Navy Yard. Both events will be livestreamed on Facebook.

Gen. James C. McConville, Army chief of staff, will be the keynote speaker during the service for the Army and Air Force that begins on Wednesday at 11 a.m. A native of Quincy, Massachusetts, McConville holds a master’s degree in aerospace engineering from the Georgia Institute of Technology and was a National Security Fellow at Harvard in 2002. The morning event will include recorded remarks from Harvard President Larry Bacow.

Capt. Michael Savageaux, the head of Boston’s Navy ROTC battalion, will speak at the Navy ceremony, which gets underway at 6:30 p.m. The service will also include comments from Rakesh Khurana, Danoff Dean of Harvard College.

As with Harvard’s graduations festivities, traditional rites will feature prominently in the services. In addition to reciting an oath to “support and defend the Constitution of the United States against all enemies,” each will receive a ceremonial first salute as a new officer and, in turn, hand a silver dollar to the person saluting them, a longstanding military custom.

Ryan Bayer’s parents will be on hand to witness him becoming a Navy ensign. Both his mother and father had long Navy careers, he said, and their service inspired him to enroll in ROTC. An economics concentrator with a secondary in psychology, Bayer said that it wasn’t always easy to balance his academics with his military commitments, but that campus mentors and friends helped him succeed, and that he loved “being able to serve something higher than myself and being part of a global force for good.” His first official assignment will be aboard the U.S.S. Preble, a destroyer based out of San Diego. After that, it’s unclear, but no matter where he lands, Bayer will be ready. “I’m especially thankful for my education and my background in the service,” he said, “and I’ll see where those two take me.”

Meeting fellow students her first year at Harvard and realizing that they were able to blend their service with their academics for the “best of both worlds” led Gayatri Balasubramanian to sign up for ROTC. It was “really inspiring” she said of her introduction to campus and to a range of classmates with “such diverse backgrounds and such diverse interests.”

“I really liked the type of community ROTC gave me,” said Balasubramanian, who concentrated in computer science with a secondary in government. She will commission as a 2nd lieutenant in the Army and travel to basic officers training school in Fort Benning, Georgia, after graduation.

Of her Crimson time Balasubramanian she will remember most her fellow students. “It’s the people that you get to meet,” she said.

Jillian Sharples is looking forward to beginning her career as a 2nd lieutenant in the Army. “I’ve learned a lot from the ROTC program, the skill set that is expected of a cadet in particular, but also just life skills, and how to manage peers and manage yourself and be resilient in the face of adversity,” said Sharples who concentrated in social studies and founded the Harvard Undergraduates Ethics Bowl, a student club dedicated to debating ethical issues.

After graduation she is heading to Sapper School, a training program for combat engineers at Fort Leonard Wood, Missouri, before deploying to Camp Humphreys in South Korea for a year as an active duty engineer officer.

Besides Sharples and Balasubramanian, the new Army officers include 2nd Lts. Andrew Crawford, Clarke Patrone, William Penzer, Peter Shiller (DCE), and Randle Steinbeck. The new Air Force 2nd Lts. are Ryan Comrie, Allan Cramblitt, and Luke Kenworthy who commissioned in a separate ceremony on the MIT campus. Morgan Whitten will take part in the Navy’s service Wednesday alongside Bayer, but will officially graduate and commission as an ensign in December.

Both the Army and Navy events will be livestreamed.