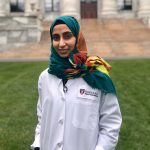 Cultivating a career in science

By Susan A. Hughes HKS Communications

When Monica Pesswani, M.C./M.P.A. ’21, looks back on her path to founding a  nonprofit to end educational inequality in India, she admits it was anything but traditional.

“Talking about the journey is always hard because I feel like there are so many moments that shaped you,” Pesswani explained.

“But sometimes you wish you didn’t have those moments,” she added, referring to her childhood, and the struggles her parents faced in rural India.

Determined to create a different life for their daughter, without the limitations that held them back, Pesswani’s parents embraced academia. “I just grew up in a culture where academia was celebrated,” she recalled. “They never pushed me, but it was celebrated, and I was told that if I did well, my life would be different, we’d have more money, we would be more stable.”

But that path felt bound in tradition. Pesswani did well in school but found herself relegated to a profession she was not passionate about. “Engineering was the default option for the kid who doesn’t like biology,” she said. That led to a career in IT, where she worked as a technical associate for a multinational Indian company.

“I struggled with creating the best technical solution but was able to deeply understand the problem, understand the customers and their context while developing meaningful conversations.”

So she said “no” to the established path and “yes” to a post-graduate program at Ashoka University, the Young India Fellowship in Liberal Arts and Leadership.

“My parents didn’t know I was there because it’s a very unsafe city for women in India. So, I lied to them,” she confessed. But she realized, this program was just what she was looking for. “The tagline said: if you have a dream, and don’t know how to make it come true, we have a place for you,” she said.  “And I remember thinking that day, ‘I’m going to resign today’ because I knew that’s what I needed,” she said.

The study of leadership and liberal arts resonated with her. “I received the life-altering opportunity to benefit from a multidisciplinary education. This was the first time I formally learned the value of thinking critically and asking questions.”

Afterward, she worked with the CEO of India’s largest ball bearing manufacturing company on a STEM project with students from disadvantaged schools. The students were introduced to 3D printing and asked to solve community issues. When one student printed a doorknob to protect his mother from his abusive father, Pesswani realized the impact holistic learning and resources could have on their lives: “I co-founded The Apprentice Project (TAP) to bring holistic development to low-income schools by providing students with opportunities and mentorship that builds knowledge, skills, and mindsets required to succeed in the 21st century.”

Once TAP was established, Pesswani and her team understood the educational need in India but wanted a global perspective. While reading Harvard Professor Howard Gardner’s theory on multiple intelligences, Pesswani took another turn from tradition. In the middle of her career, she took leave to attend Harvard to pursue dual degrees with the Graduate School of Education (GSE) and Harvard Kennedy School (HKS). “I needed to go where this person teaches,” she recalled, referring to Gardner, a developmental psychologist and the John H. and Elisabeth A. Hobbs Research Professor of Cognition and Education at the GSE.

Financial aid and various fellowships allowed Pesswani to pursue her passion at Harvard. She completed her degree at the Graduate School of Education in 2020, receiving the Harvard Innovation Lab’s Social Impact Fellowship Fund in 2020 which provides grants to impact-driven ventures. During her time at HKS, she was also a Cheng Fellow at the Social Innovation and Change Initiative. And TAP was just selected as one of the five finalists for Harvard’s President’s Innovation Challenge award.

Recalling her year of hybrid learning at HKS, one class stands out. “I think my favorite course was Professor Heifetz’s course on leadership development,” she said, in part because it challenged her own traditions. “Professor Heifetz forced me to have these difficult conversations to understand the value for my life. To understand what my role for myself is. And I think that’s deeply missing where we come from in India, especially as women, we’re expected to live for others. I loved that course.”

Pesswani said she looks forward to returning to India in the fall and resuming co-leadership at TAP with fresh and bold ideas.

“It took me 25 years to gain holistic learning and to create the life I always desired for my family and myself,” she said. “Through TAP, I hope to provide opportunities to students that will not only build skills in them but also help them break out of the spiral of poverty. I truly believe that in life, when challenge meets opportunity, magic unfolds.”

Yet, she has one more tradition to work around. “The day I got my Harvard acceptance, it was five in the morning and I woke my parents up. They hugged me tightly, congratulated me. And then my dad sighed, ‘Oh no, so you’re not going to get married this year as well?’”