Music and theater with a message 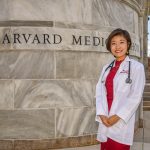 Harvard senior, who already has one album, heads to Dublin to study theater as a Mitchell Scholar

Connecting with a best-selling recording artist is a dream for any promising young musician. For Joy Nesbitt ’21, that dream became a reality when one of her idols, Grammy Award winner Alicia Keys, helped Nesbitt polish a song from her first album, “Atlas Rising,” in 2020.

“All of a sudden we’re on Zoom, and she’s giving me comments. She’s playing my song on the piano,” said Nesbitt, who graduates in May with a joint degree in social anthropology and music. “It was honestly a dream come true, because Alicia Keys has always been a role model of mine.”

Keys’ talent and activism (the connection between the two was made through She Is the Music, Key’s nonprofit supporting women in the industry) have long inspired Nesbitt, who devoted much of her Harvard time to producing theater and music with a message. And that drive to create art that encourages her audiences to reflect will extend well beyond Harvard’s gates. A Mitchell Scholar, Nesbitt heads to Ireland after graduation to study theater directing at the Lir Academy at Trinity College Dublin. Her long-term goal: “Make art that feels fulfilling to me for as long as possible,” she said, always with an eye on social justice and inclusivity.

At Harvard, Nesbitt has taken part in a range of music and theater groups, serving as president of the “Blackapella” group KeyChange as well as on the board of the Harvard Black Community and Student Theater group (Black C.A.S.T.). She has also worked as a diversity peer educator in Harvard’s Office of Diversity Education & Support and served on the board of the Black Students Association.

Despite the COVID lockdown Nesbitt never stopped creating, virtually directing her classmates in a Zoom production of “God of Carnage,” the 2006 play by Yasmina Reza about two sets of parents who meet to discuss a scuffle between their children. “That play is funny and silly and about how childish we are as adults,” said Nesbitt. “But also, in the way that we did it, it was very much about the respectability politics that we play into when we feel like the ground is unstable.”

For Nesbitt, art and understanding go hand in hand. “The wonderful thing about art is that it can offer a mirror to society so that we can see what’s going on,” she said. “I think without art we’d be moving through space without really understanding or seeing ourselves at all.”

Her new collection of songs, which includes the tracks “In Praise of Black Women” and “A Meditation on Assimilation,” is a case in point, addressing questions of belonging, equality, inclusion, and more. Nesbitt said the work is in part a reflection of her own struggles to navigate an impossible year and to face some fundamental truths. “I wondered to myself, ‘Have I meditated on the fact that I’ve been in predominately white institutions almost my entire life, and that’s caused me to have different thoughts about my identity? Have I thought about the fact that self-love is the first step to loving someone else? Or have I thought about the fact that my father has experienced some of the same things in 1968 that we were experiencing in the summer of 2020?’ Those are the things that I had to process and give space for.”

Nesbitt credits her parents with inspiring her early interest in the arts. They tuned the radio to the Dallas-based, nationally syndicated “Tom Joyner Morning Show” as they drove her to school each morning, introducing her to Stevie Wonder, George Clinton, and a range of other R&B artists. She studied piano and violin, and got involved in local theater growing up in Dallas. In high school, she realized she wanted to write songs on the guitar, so she taught herself to play, and picked up the ukulele on the side. When it came time for college, Nesbitt visited campus for a Harvard summer program in 2017. “I lived in Dunster,” she said, “and fell in love.”

Post-Harvard, whether directing or laying down tracks, Nesbitt said her goal is creative storytelling that’s as inclusive as possible.