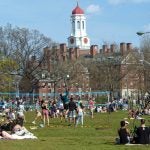 Ever since he was a teen growing up in the Italian Alps, Francesco Rolando ’21 dreamed of a career in medicine. But in four years, his vision of what that might mean has changed.

Rolando still aspires to become a practicing physician. But, inspired by a first-year human rights seminar and later a thesis project that exposed him to migrants in an Italian medical clinic, he now also wants to help remove barriers to health care, especially for marginalized populations.

“I’m very interested in how medicine is dispensed and the inequalities in the way that we deliver health care,” said Rolando. He hopes to pursue those questions through research and advocacy in medical anthropology.

Rolando has mapped out a postgraduate path that would culminate in a joint M.D. and Ph.D. in that field. Along the way, he plans to obtain a master’s degree and work with organizations that promote health care access.

Harvard was an ideal place to spark his interest in medicine in a social context, because “so many people here have done so much important work on this topic,” Rolando said. While he originally intended to concentrate in microbiology, what he learned in that early seminar, particularly what Harvard T.H. Chan School of Public Health Professor Jacqueline Bhabha had to say about the plight of migrants, changed his mind.

“I realized I was much more interested in the human aspects of medicine than in the basic science of it,” Rolando said. That prompted him to switch his concentration to social studies, with molecular science as his secondary.

Rolando’s interest in health policy deepened last spring, when he conducted research for his thesis while volunteering at a Turin medical clinic. The cooperative agency serves patients — primarily undocumented migrants — who avoid seeking care through Italy’s national health care service because of fear of deportation and other reasons.

His work checking patients into the clinic formed the basis of his research, Rolando said, and gave him insight into “the way patients interact with the health care system.”

“It was an incredible experience. It showed me the power of using medical anthropology to work with some of the least-considered groups in our population,” said Rolando, whose thesis project was supported by a grant from the Minda de Gunzburg Center for European Studies (CES) and the Weatherhead Center for International Affairs.

Rolando almost lost the chance to work in the clinic because, like most of Italy, it was shut down due to the pandemic. But when COVID-19 restrictions were eased in May, Turin clinic reopened.

Rolando’s completed thesis focuses on how citizens and legal immigrants seek access to health care differently than do undocumented migrants. His research left him with strong convictions on the subject.

“We tend to forget or leave behind foreigners without a residency permit. And that’s dangerous,” he said, noting that COVID-19 shows “the whole community loses out” when any group has poor access to health care.

Rolando, who was raised in Antrona Schieranco, a mountain village of 600, said a high school exchange year he spent in Colorado was a crucial step along the way to Harvard.

“My family always pushed me to try to expand my horizons a bit,” he said. “That year was a wonderful challenge to go outside my village and see the world beyond it.”

Rolando credits Harvard with giving him the flexibility and resources to pursue his cross-disciplinary interests, and for special learning opportunities such as the four-day trip to Washington he took in early 2020 with 15 other students. CES and the Center for Hellenic Studies organized the trip to introduce students to European policy experts.

“It was my first time in Washington,” Rolando said. “It was wonderful to hear from people in the places where decisions are made about cross-Atlantic relations.”

Another highlight was his participation in CrimsonEMS, for which he served as operations chief in 2020.

“Having a chance to get some incredible knowledge about emergency medicine while serving the community and meeting great people, was surely invaluable,” he said.

When Harvard went virtual in March 2020, Rolando was among a small number of mostly foreign students who remained on campus.

“It felt a bit like a ghost town,” he recalled, but he added, “I was fortunate to know a few others that stayed because most of us were international students. And the staff were incredible during that very difficult period.”

Rolando decided to come back to campus last August because he believed the differing time zones and the geographical distance would make it difficult to fully experience his senior year. Although campus is not fully back to normal, “I have always felt at home,” he said, citing the presence of some friends and the continued support of staff.

Rolando said from his thesis experience, he is hopeful he can make a difference in lowering barriers to needed care.

“Health care measures should be provided to everyone, not just to a privileged subset of the population,” he said.